By Bruce Wallin via National Geographic 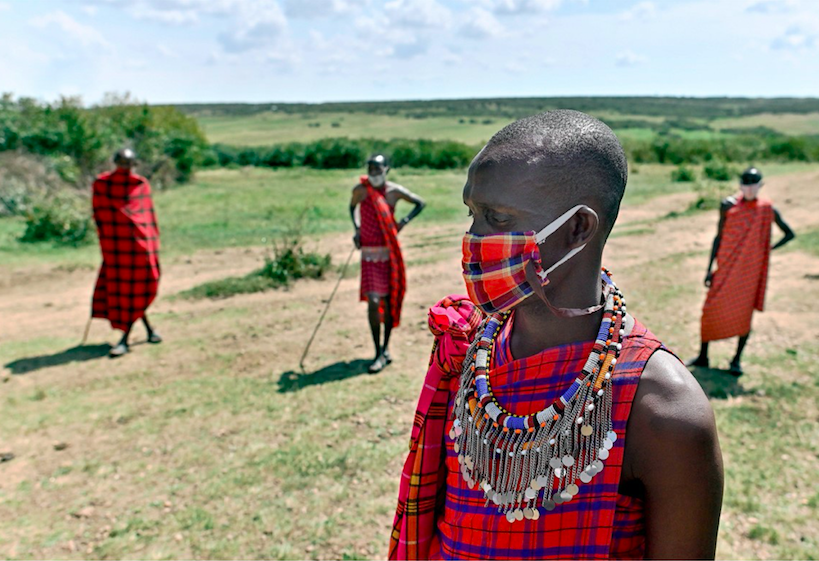 COVID-19 is surging, but with their economies imperiled, some nations are welcoming U.S. travelers again.

COVID-19 is raging in countries including the United States, France, and Germany. Many other nations are returning to full or partial lockdowns to combat viral transmission as we head into an ominous winter. Yet other countries are starting to reopen to tourists coming from the very same places where the virus is rampant. Why is this happening?

Like American restaurants and bars serving food and drink again as the virus soars, many destinations with tourist economies (Egypt and Costa Rica, for example) are indicating that remaining closed to visitors indefinitely isn’t financially sustainable. “The shutdown of tourism has had a massive impact on many countries’ economies,” says Steve Carvell, a professor at Cornell University’s School of Hotel Administration. “They don’t have the luxury of missing an entire season of income.”

Figuring out how to get euros or dollars flowing in while still protecting citizens’ lives is a challenge for any country. Here’s how several popular destinations are balancing the risks and rewards. 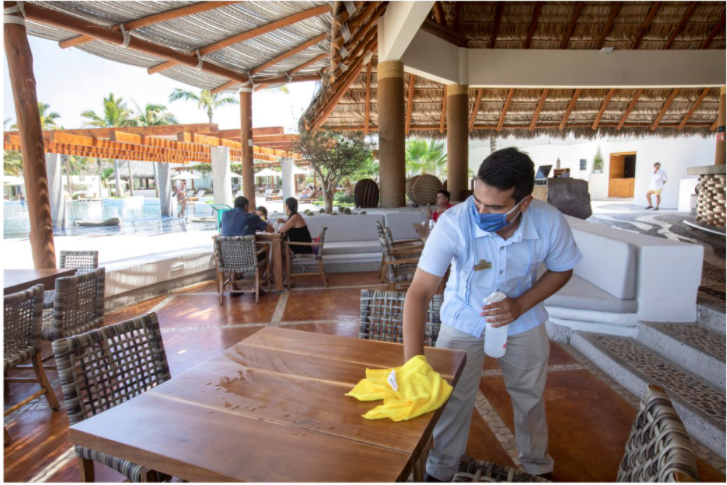 A waiter at a restaurant in La Paz, Mexico sanitizes a table. Tourism is a multibillion dollar industry in Mexico, but it has dropped significantly since the start of the COVID-19 pandemic in March. Photograph by Alfredo Martinez, Getty Images

ECONOMIES DEPEND ON TOURISTS

According to the World Travel & Tourism Council, the tourism industry accounted for 330 million jobs—nearly one out of every 10—in 2019. The organization estimates that approximately 121 million of those jobs could be lost due to the pandemic. In tourism-dependent regions such as the Caribbean—where the industry accounts for nearly 14 percent of GDP—the pain from COVID-induced shutdowns is amplified. “For the vast majority of the Caribbean, some 80 to 90 percent of their visitors are coming from North America,” says Carvell. “They have to open up.”

The economic benefits of flinging borders open are clear, but the thinking behind it isn’t always transparent. “Decisions are at each government’s discretion,” says John Spence, president of the tour company Scott Dunn USA. “You like to think it’s based on scientific advice, but they’re all being lobbied internally by their tourism boards.”

Monitoring COVID-related restrictions—and risks—has become so critical that Spence has a full-time employee dedicated to the task. Even so, his team regularly consults U.S. State Department updates, U.S. embassy websites, British travel advisories, the WTTC, and other sources when weighing whether or not to send their clients anywhere.

IN SOME COUNTRIES, THE WELCOME MAT STAYS OUT

Some countries with significant tourism economies never really closed to outsiders, including Mexico. Aside from limiting land-border crossings, the U.S.’s southern neighbor has no entry restrictions for Americans. Visitors might get a temperature check on arrival, but beyond that, the U.S. Embassy in Mexico merely posts basic information about social distancing and good hand hygiene on its website.

Such seemingly lackadaisical attitudes might stem from financial pressures. Foreign tourists—the largest percentage of them Americans—spent nearly $25 billion in Mexico in 2019. Tourism represents more than 15 percent of the GDP, a slice that an already struggling economy cannot afford to lose.

Roberto Zapata, tourism vice president of Mexico’s National Chamber of Commerce, recently told reporters that the industry has lost $180 million a day since March. In 2020, he expects the tourism sector to only reach, at most, 45 percent of its 2019 profits. With many hotels operating at just 30 percent capacity due to government restrictions and small-time businesses (boat operators, tour guides) seeing little to no tourist income, remaining open seems like the only choice.

Other countries with few restrictions include Tanzania, where tourism generated nearly $2.5 billion a year pre-pandemic. In June, President John Magufuli falsely declared the country free of the coronavirus and the government stopped reporting cases entirely. Magufuli attributed the health miracle to prayers and an herbal tea, and is now actively encouraging foreigners to visit. The U.S. Embassy, however, says the risk of contracting COVID-19 remains high in Tanzania, where healthcare facilities have become overwhelmed.

Spence thinks Kenya is a safer East African destination right now. “[It’s] been very good about when [it’s] reopening and under what conditions,” he says. The country, where tourism employs some two million people, was closed for more than four months before allowing international flights to resume on August 1. “Many people were rendered jobless and many families have suffered,” says Dr. Betty Addero Radier, CEO of the Kenya Tourist Board. “The resumption has given hope to many.”

Addero Radier believes reopening now is the only choice. “The virus will be with us for a long time,” she says. “Closing down our borders and airspace was a necessary decision toward containing the spread. But we couldn’t close the economy forever.” 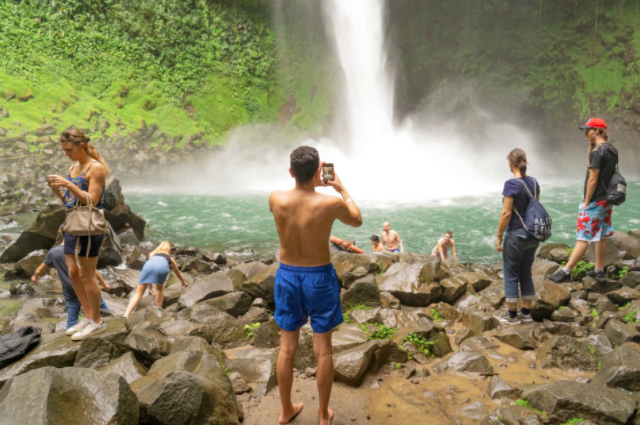 Travelers snap photos and swim beside the Fortuna River in Costa Rica's Arenal Volcano National Park. The Central American Country opened back up to American tourists in November. To enter, they must fill out a health form and buy insurance covering potential quarantine and medical expenses. Photography by Thomas Ebert, LAIF/ REDUX

A CAUTIOUS APPROACH IN COSTA RICA

When balancing economics versus health, other tourism-reliant countries have taken more cautious approaches, building in extensive safety protocols before reopening.

Take Costa Rica and its $4 billion annual tourism industry, which is expected to be down by as much as 70 percent overall this year.

“This translates to human drama,” says Gustavo J. Segura, Costa Rica’s Minister of Tourism. “We’re talking about hundreds of thousands of people whose jobs were lost.” That’s 600,000 jobs tied directly or indirectly to the tourism industry, which accounts for more than eight percent of the country’s GDP. U.S. travelers make up nearly half of Costa Rica’s approximately three million foreign visitors in a typical year, and tourism officials were understandably anxious to let them back in to spend money at jungle ecolodges and beach resorts.

To reopen in a safer way for both travelers and citizens, the government proceeded cautiously, first resuming domestic tourism in July and allowing a limited number of Europeans in the beginning in August. It installed precautionary measures including closing beaches at 2:30 p.m. and limiting guided tours to private groups within social bubbles. 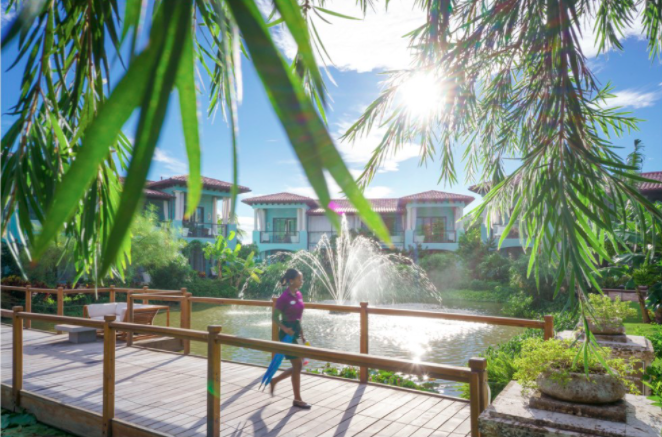 The government of Grenada has taken a cautious approach to allowing foreign tourists back in, requiring a negative COVID-19 test both before and after arrival. Visitors must quarantine at their hotel or resort (like Sandals, pictured) before getting a negative test result that allows them to roam around the island. Photography by Dietmar Denger, LAIF/ REDUX

The results have been positive: “Not one of the visitors entered the country carrying the virus, nor did they acquire the virus while in Costa Rica,” Segura says. “In September, we decided it’s time to open to the U.S.” At first, residents of 20 U.S. states reporting lower infection levels than Costa Rica were allowed to visit; by November 1 the country opened to all Americans.

IN THE CARIBBEAN, WEIGHING COSTS AND BENEFITS

Caribbean islands have been cautiously reopening to U.S. tourists. The U.S. Virgin Islands—where tourism accounts for more than 50 percent of the GDP—was one of the first to reopen, in June, and has been followed since by destinations including St. Lucia, Turks and Caicos, the Dominican Republic, and, more recently, the three-island nation of Grenada.

The Caribbean region drew 31.5 million tourists in 2019, generating more than $40 billion in revenue—a figure expected to fall by at least 50 percent this year. Grenada is less dependent on travel than many Caribbean nations. Nicknamed the Spice Island, it is a global source of nutmeg, cinnamon, and other crops.

Tourism accounts for about 23 percent of its GDP and more than 10,000 jobs among a population of 112,000 plus people. “For a small island that’s massive,” says Patricia Maher, the CEO of the Grenada Tourism Authority.

The effects in a place like Grenada go well beyond tourism jobs. “It’s not just the direct payrolls that are being impacted—it’s the plumbing, the electrical, all the other ancillary services,” says Carvell. “Those individuals who would buy goods and services, now they have little or no income to do that. Those things have an impact across the economy.”

Before it decided to allow U.S. tourists to return in early October, the Grenadian government weighed the extended financial fallout against the COVID risks. “Our minister of tourism is a medical doctor, and she works very closely with the minister of health and the chief medical officer,” says Maher. “They’ve spent hours, days, weekends working on protocols, finding that balance between lives and livelihood.”

(Related: Can a COVID-19 test guarantee safer travel? A science editor found out.)

The government worked closely with the Caribbean Tourism Organization and the Caribbean Public Health Agency, a consortium dedicated to preventing disease in the region. Grenada—which has had only 41 confirmed COVID-19 cases—has erred on the side of caution. To visit, non-Caribbean-based citizens need a negative PCR test taken within the past seven days. Once there, they must remain at their resort or hotel for four days before testing again; if the second result comes back negative they can travel throughout the country.

Even with extra measures countries are implementing before opening to tourism again, outbreaks are inevitable. “You can take all the precautions you want, but this virus is going to show up, and it is going to be travel mediated,” says Dr. Nabarun Dasgupta, an epidemiologist at the University of North Carolina. “The question is, ‘What are you going to do when the volcano blows?’”

Countries including Grenada and Costa Rica are preparing for that day. “Our minister of tourism is a realist,” Maher says. “We put the best measures in place to prevent it, but at the end of the day we expect it to happen.”

To address potential outbreaks, Grenada has an extensive contact-tracing process; the government also trained more than 2,000 tourism workers in infection control. Costa Rica is relying largely on its highly regarded public health system, which includes a network of walk-in clinics around the country. “This is critical for tourism, because you may be in a very rural area, and you’ll get a certified doctor,” says Segura, adding that Costa Rica also now requires visitors have travel insurance to cover COVID 19-related hospitalizations and quarantines.

Preventing and containing virus transmission is a primary factor in successful reopenings. “If people don’t feel comfortable in the host country’s ability to maintain their safety, they’re not going to go,” says Carvell. “The market is going to reward the countries that provide reasonable levels of safety.”