What is coronavirus and what are the symptoms? 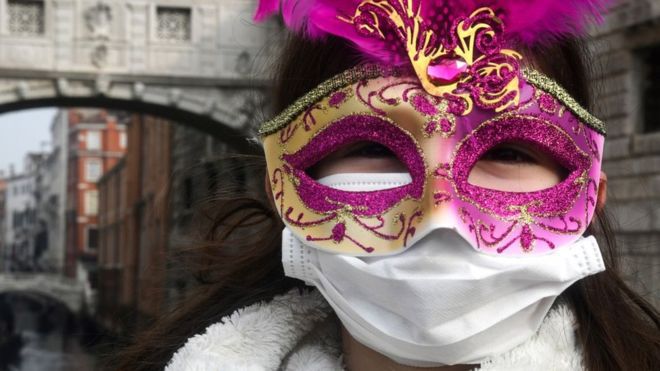 A virus causing severe lung disease that started in China has spread to 27 other countries, including the UK.

What are the symptoms?

It seems to start with a fever, followed by a dry cough.

After a week, it leads to shortness of breath and some patients require hospital treatment. Notably, the infection rarely seems to cause a runny nose or sneezing. 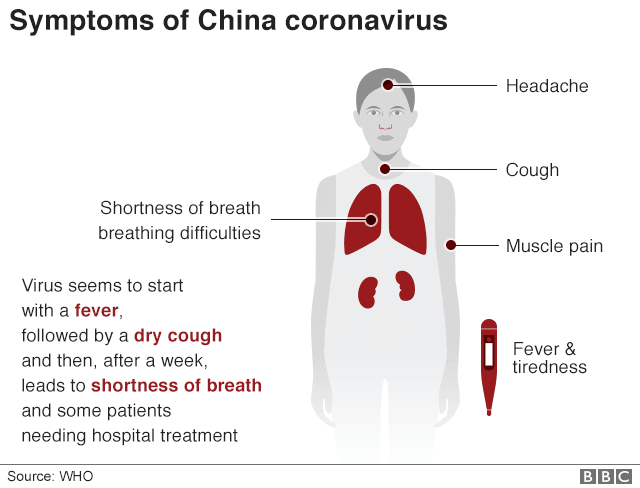 But some researchers say it may be as long as 24 days.

And Chinese scientists say some people may be infectious even before their symptoms appear.

How deadly is the coronavirus?

Based on data from 44,000 patients with this coronavirus, the WHO says:

The proportion dying from the disease, which has been named Covid-19, appears low (between 1% and 2%) - but the figures are unreliable.

To put this into context, about one billion people catch influenza every year, with between 290,000 and 650,000 deaths. The severity of flu changes every year.

Can coronavirus be treated or cured?

Right now, treatment relies on the basics - keeping the patient's body going, including breathing support, until their immune system can fight off the virus.

However, the work to develop a vaccine is under way and it is hoped there will be human trials before the end of the year.

Hospitals are also testing anti-viral drugs to see if they have an impact. 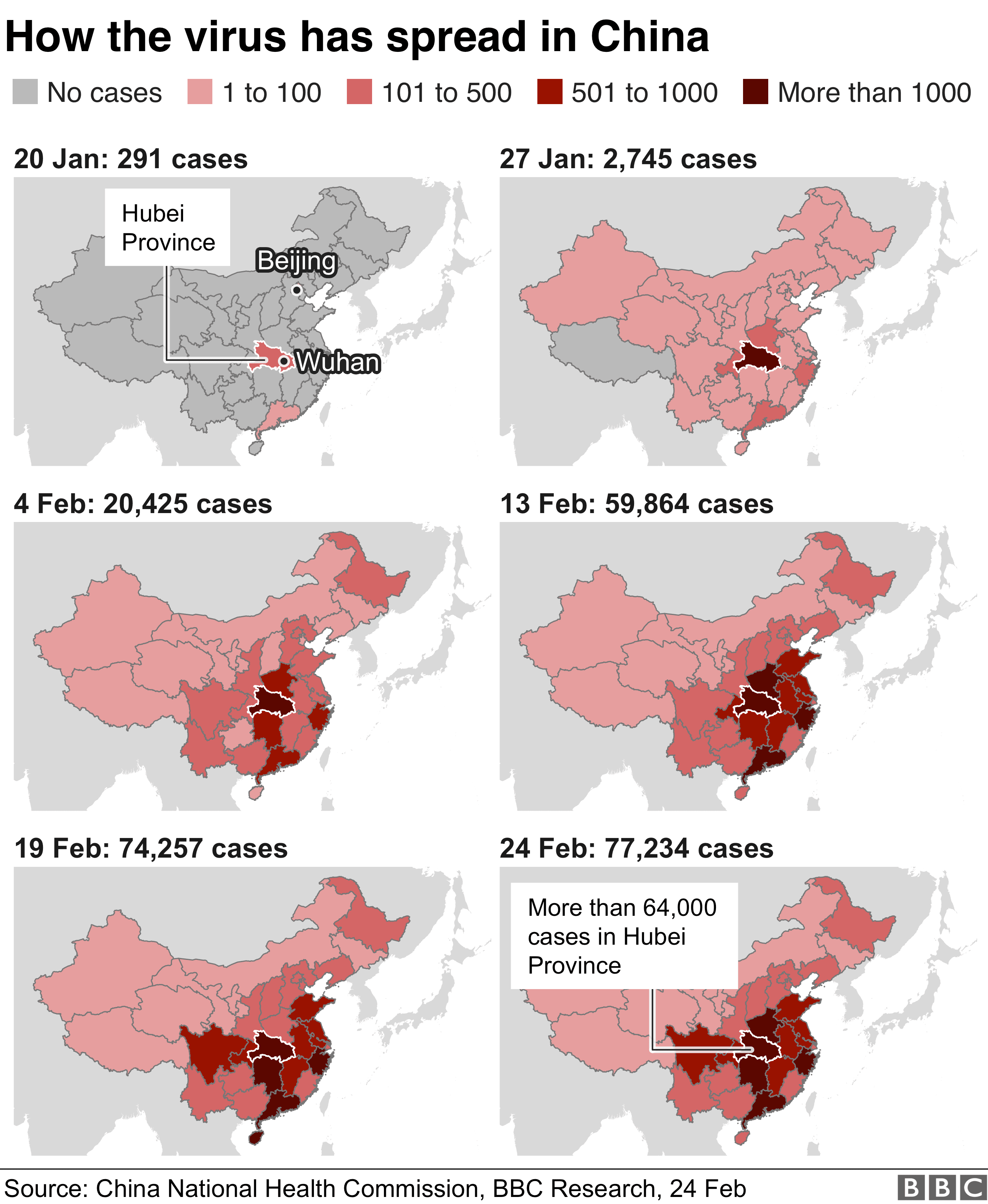 How can I protect myself?

How fast is it spreading?

Thousands of new cases are being reported each day. However, analysts believe the true scale could be 10 times larger than official figures.

Outbreaks have now occurred in South Korea, Italy and Iran, raising fears that it could become a pandemic. A pandemic is declared when an infectious disease threatens different parts of the world simultaneously. 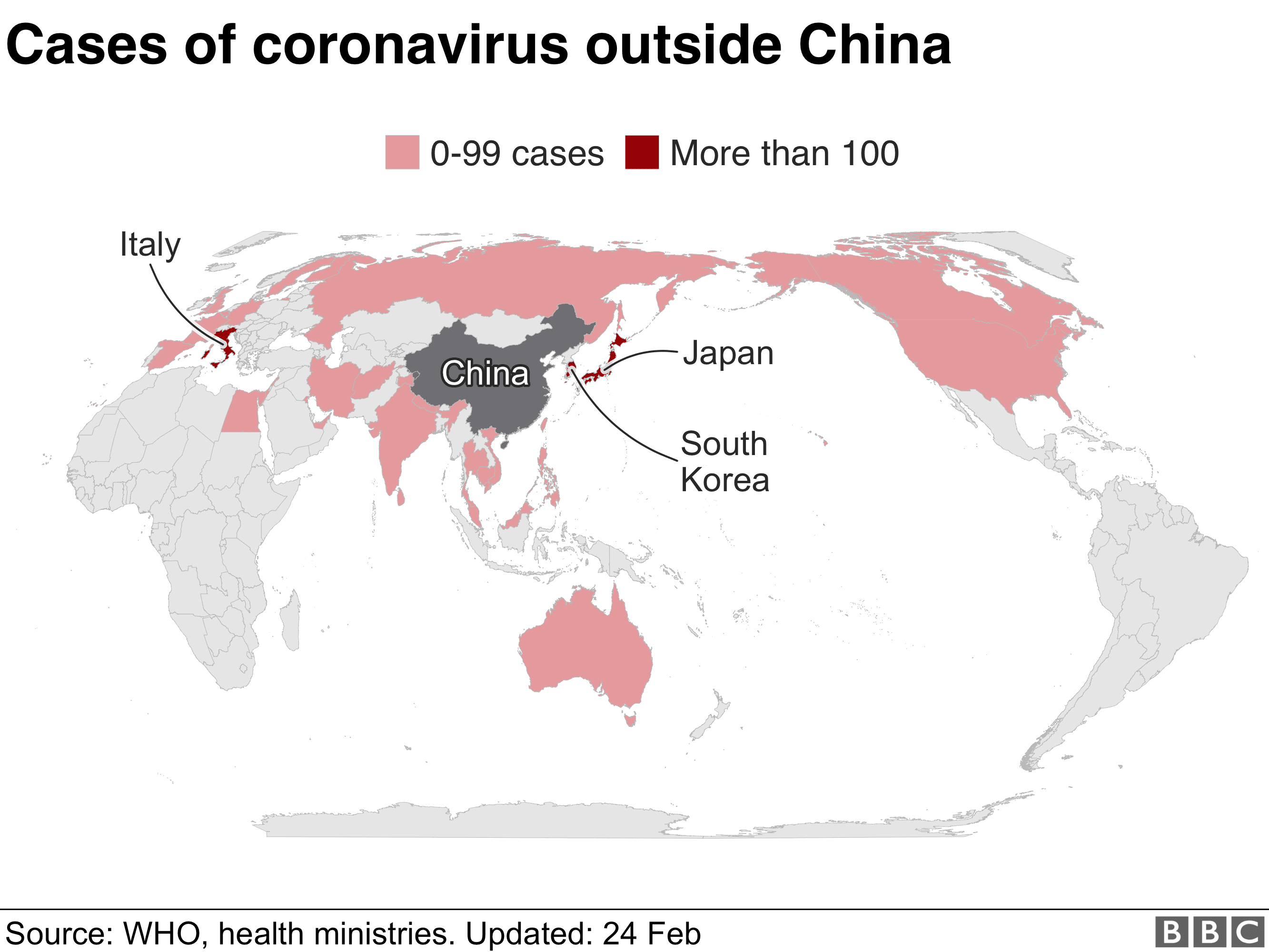 The WHO has said it is concerned about the number of cases with no clear link to China or other confirmed cases. It has said the window of opportunity to contain the virus was "narrowing".

With colds and flu tending to spread fastest in the winter, there is hope the turning of the seasons may help stem the outbreak.

However, a different strain of coronavirus - Middle East respiratory syndrome - emerged in the summer, in Saudi Arabia, so there's no guarantee warmer weather will halt the outbreak.

How did it start?

This virus is not really "new" - it is just new to humans, having jumped from one species to another.

Many of the early cases were linked to the South China Seafood Wholesale Market, in Wuhan.

In China, a lot of people come into close contact with animals harbouring viruses - and the country's dense urban population means the disease can be easily spread.

Severe acute respiratory syndrome (Sars), which is also caused by a coronavirus, started off in bats and then infected the civet cat, which in turn passed it on to humans.

The current virus - one of seven types of coronavirus - does not seem to be mutating so far. But while it appears stable, this is something scientists will be watching closely.