We’ve Got To Talk About Kanye

Kanye won't leave his estranged wife and her new boyfriend alone — and it's disturbing.

By Stephen A. Crockett Jr. 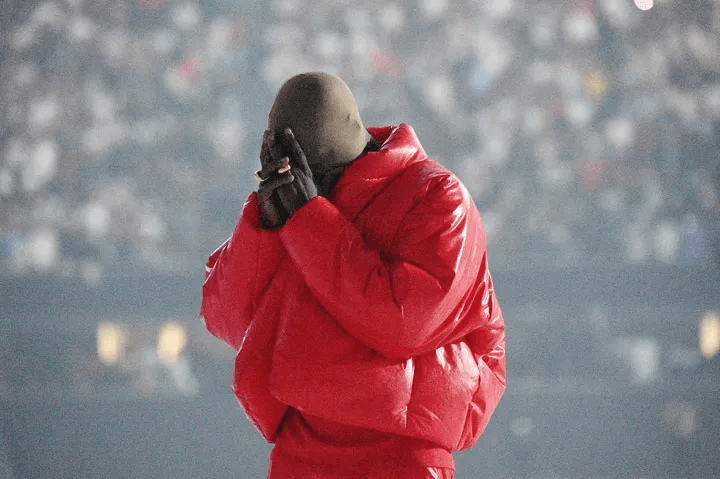 Kanye West is seen at at the "Donda by Kanye West" listening event at Mercedes-Benz Stadium in Atlanta on July 22, 2021.KEVIN MAZUR VIA GETTY IMAGES

Many of us do this thing where we take celebrities off their perch, put them in our coat pockets and bring them home. We sit them at our dinner table. We talk about them. We speak for them. And because they create art that speaks to us, we feel like they hear us and they get us. They see us, too.

Maybe that’s our fault. Maybe it’s the internet’s, or maybe it’s theirs. It’s a weird relationship between the artist and the fan, the admirer and those worthy of admiration, and social media keeps closing the distance.

So we need to talk about Kanye West.

Because Kanye West keeps talking to us.

He keeps asking us for advice.

He’s posted intimate details about his relationship. About his hate for his ex Kim Kardashian’s new man. About his kids. About the lengths her family is taking to keep him away. About the house he purchased across the street from Kim’s.

And all the toxicity, the triggering, the gaslighting and the attention — from the media and fans — is normalizing poisonous and unhealthy behavior. And he’s using us to do it by weaponizing his fame.

West is using his status and social platforms (he’s got 13.5 million followers on Instagram alone) to intimidate Kim Kardashian and her new beau, comedian Pete Davidson. He’s called for his followers to yell “Kimye forever” should they ever see the couple in real life.

Earlier this week, he posted — and then subsequently removed — a screenshot on Instagram of a text that he claimed was sent by Kardashian: “U are creating a dangerous and scary environment and someone will hurt Pete and this will all be your fault.”

In a different post, he wrote, “UPON MY WIFE’S REQUEST PLEASE NOBODY DO ANYTHING PHYSICAL TO SKETE I’M GOING TO HANDLE THE SITUATION MYSELF.” The post was accompanied by a photo of actor Ving Rhames choking co-star Tyrese Gibson from the movie “Baby Boy.”

He then posted a screenshot of a message he presumably sent to Kim: “I will always do everything to protect you and our family forever. And I listened to you and told everyone to make sure nothing physical happens to Skete.”

West often refers to Davidson as “Skete,” along with other names such as “that dickhead” and “Hillary Clinton’s ex-boyfriend.”

Then, a text allegedly sent by Kardashian asks West, “Why can’t you keep any of our conversations private???”

West responded, “Because I got a text from my favorite person in the world,” adding that he is her “number one fan” and then following up with, “Why wouldn’t I tell everyone!!!!!” He also posted a photo of himself holding a handwritten note claiming that his account was not hacked.

And then, West took us off the group chat. He deleted all of his posts from Instagram except for one, a montage of Kardashian with three of the couple’s four children alongside the caption: “GOD PLEASE BRING OUR FAMILY BACK TOGETHER.”

It’s important to note that West didn’t just lose Kardashian — he lost her to the anti-Kanye. The two men couldn’t be more opposite. Kanye West makes it a point not to smile in photos. Pete Davidson makes people smile for a living. West considers himself to be a fashion god. Davidson dresses like a college student on laundry day. Kanye West pals around with some of the biggest names in hip-hop. Davidson is friends with Machine Gun Kelly, and the two men take photos like this.

And none of this matters. Yet, all of this matters. Davidson could be the love of Kardashian’s life. He could also be holding space long enough for West and his antics to disappear. Davidson could be an oxygen tank, or he could be a Band-Aid. That’s for Kim to determine, not us. What’s of concern is Kanye’s disturbing history of broadcasting his issues with his estranged wife when he doesn’t get his way. His adult male temper tantrum is not only invasive; it’s volatile and destructive.

All of it — the threats, the fragility of the male ego, the dissolution of the relationship — is toxic, and it needs to stop being reported about as if it’s typical celebrity gossip. It’s not. Media and onlookers need to stop participating in the drama. They need to stop sending messages like, “That’s right, Kanye, fight for your family.” Because he’s not fighting for anything other than a date with a judge about a restraining order. At some point, men must learn to handle heartbreak without threats of violence and incessantly aggravating an ex on social media. It isn’t just manipulative, intimidating and scary to women. It’s a matter of life or death — especially when you consider that the leading cause of homicide for women worldwide is domestic violence.

In 2017, roughly 87,000 women were murdered around the world, and more than half of them were killed by partners or family members, according to a United Nations report. More than a third of those who were intentionally killed that year were murdered by a current or former intimate partner.

I keep wondering, who are West’s big homies? Not the famous ones, but the ones who have known him long enough and whose voices he trusts so they can pull his coattails and tell him how not to be this guy. Then, I saw him in photos at the Super Bowl LVI with former NFL wide receiver Antonio Brown, and it made sense.

Brown has been the model for toxic men who’ve grown tired of hearing about Tristan Thompson’s evasion of child support. West and Brown have been palling around ever since the latter took off his jersey midgame and walked off the field. In 2018, a female trainer filed a civil lawsuit against Brown, claiming she was sexually assaulted. In 2019, Brown was accused of pushing a woman with two hands, causing her to fall. From 2015 to 2019, police were dispatched on domestic violence calls to Brown’s house four different times. And then there was this video of Brown yelling at police and his longtime girlfriend Chelsie Kyriss, the mother of three of his five children: “You look like a fucking fish. A fucking fish out of water. You look dead.” Warning: The video is disturbing.

All of this is beyond the death of West’s mother, which some people have used to explain his erratic behavior. It is also beyond his struggles with mental health, which he reportedly doesn’t take medication for. This is about men. This is about toxic behavior being allowed to persist for too long. It’s about the haphazard mistreatment of women while actively being in your problem and doing nothing to fix it. It’s about surrounding yourself with equally toxic men who curse their children’s mother in front of their kids. It’s about us, the gawkers slowing up traffic because we can’t help but stare at the wreckage on the side of the road.

West won’t leave his estranged wife alone. He’s using his social media platform to scare her and posting intimidating messages and images toward her new boyfriend. And yes, I saw his apology — he updated his Instagram again, leaving only his apology and a message of encouragement he’s received — but this is also a part of the abusive cycle. Catch me in a few days when Kim doesn’t fold to his demands. It’s time for West and men like him—men struggling with complicated feelings, men who are too tough for therapy and medication, and men who would rather use their fists to tear things down than sit with the emotions that come with rejection—to seek help. It’s also time for the media to stop indulging in the circus of catastrophe for destruction’s sake.

There are real lives involved here, and no matter how many reality TV episodes Kardashian has done, she didn’t ask for this, nor does she deserve it.