By Mia Jankowicz via Business Insider 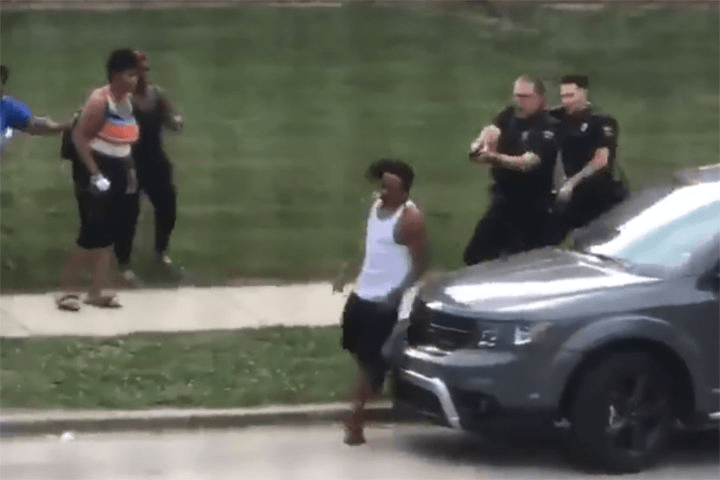 - Video circulating online shows at least one police officer in Kenosha, Wisconsin, repeatedly shoot a Black man who was walking away from officers to get into a car.

- The Kenosha Police Department acknowledged the shooting in a statement. They said officers were called to a "domestic incident" on Sunday afternoon.

- Local media named the man as Jacob Blake. The police said he was in serious condition in a hospital after the shooting.

- So far little information is available about the events that led to the shooting.

- Witnesses told The Kenosha News that the man was unarmed and had been trying to break up a dispute between two women when the police were called.

At least one police officer in Wisconsin shot a Black man in the back seven times Sunday afternoon after officers were called to a domestic incident, according to multiple reports.

Video shared widely on social media shows the confrontation between officers from the Kenosha Police Department and a man named in local media as Jacob Blake.

A statement from the department confirmed a police shooting had taken place. It said the victim was given first aid at the scene and then flown to a hospital, where he was in serious condition.

Protests began in the city not long after, despite a curfew order being put in place.

Disturbing video of the incident circulated on social media. It shows a man — identified as Blake — walking away from multiple police officers before trying to get into a car.

The footage, which appears to have been taken from through a window across the street, then shows one officer, who is nearly directly behind Blake, pulling at Blake's T-shirt with his left hand. 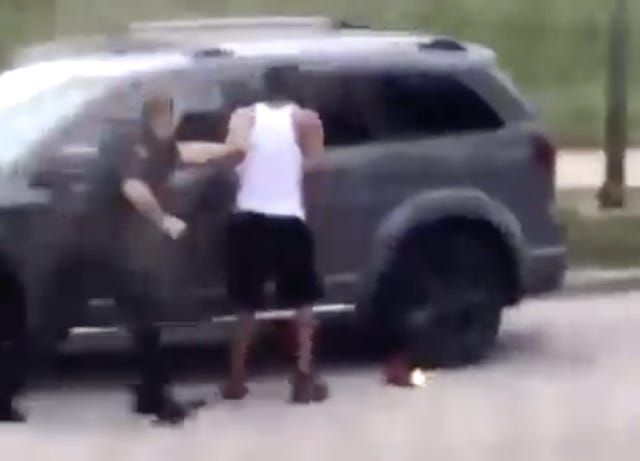 A police officer grabs at Blake's shirt shortly before shots are fired. Twitter

The officer keeps hold of Blake's shirt, a gun in his other hand, as Blake moves to sit in the car. Seven shots can then be heard as onlookers scream.

Civil-rights lawyer Ben Crump, whom reports say is representing Blake's family in this case, posted the video to his Twitter feed. Viewers may find the footage disturbing.

The video does not show the circumstances that led Blake to walk away from the officers.

According to the Kenosha police statement, officers were called to the 2800 block of Kenosha's 40th Street at 5:11 p.m. local time to reports of an unspecified domestic incident.

Witnesses told the local newspaper The Kenosha News that Blake was unarmed and had been trying to break up a dispute between two women. There has been no official confirmation of the circumstances of the shooting.

After the shooting, at least 60 protesters and dozens of police squad cars arrived at the scene, the Kenosha News said.

The police put the city under curfew until 7 a.m. local time. In a tweet they cited "numerous arm robberies and shots fired calls."

The police are not releasing further details of the incident, including whether Blake was armed, citing an investigation that has been launched by the Wisconsin Department of Justice.

The officer who shot Blake, who has not been named, has been placed on administrative leave, the justice department said.

Crump, the civil-rights lawyer, said in a tweet that Blake's three sons were in the car at the time of the shooting.

The tweet said: "They saw a cop shoot their father. They will be traumatized forever. We cannot let officers violate their duty to PROTECT us. Our kids deserve better!!"

Crump, who was involved in the George Floyd and Breonna Taylor cases, is representing Blake's family in the case, according to The Daily Beast. 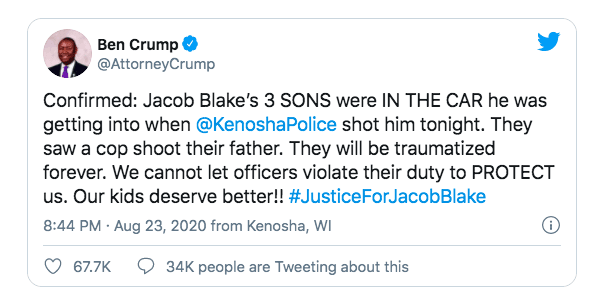 In response to a request from Business Insider, the Kenosha Police Department said it had no comment beyond its public statements.