To attract people back to the air, Delta changes airplane cleaning and interactions with passengers

By Evan Ramstad via Star Tribune 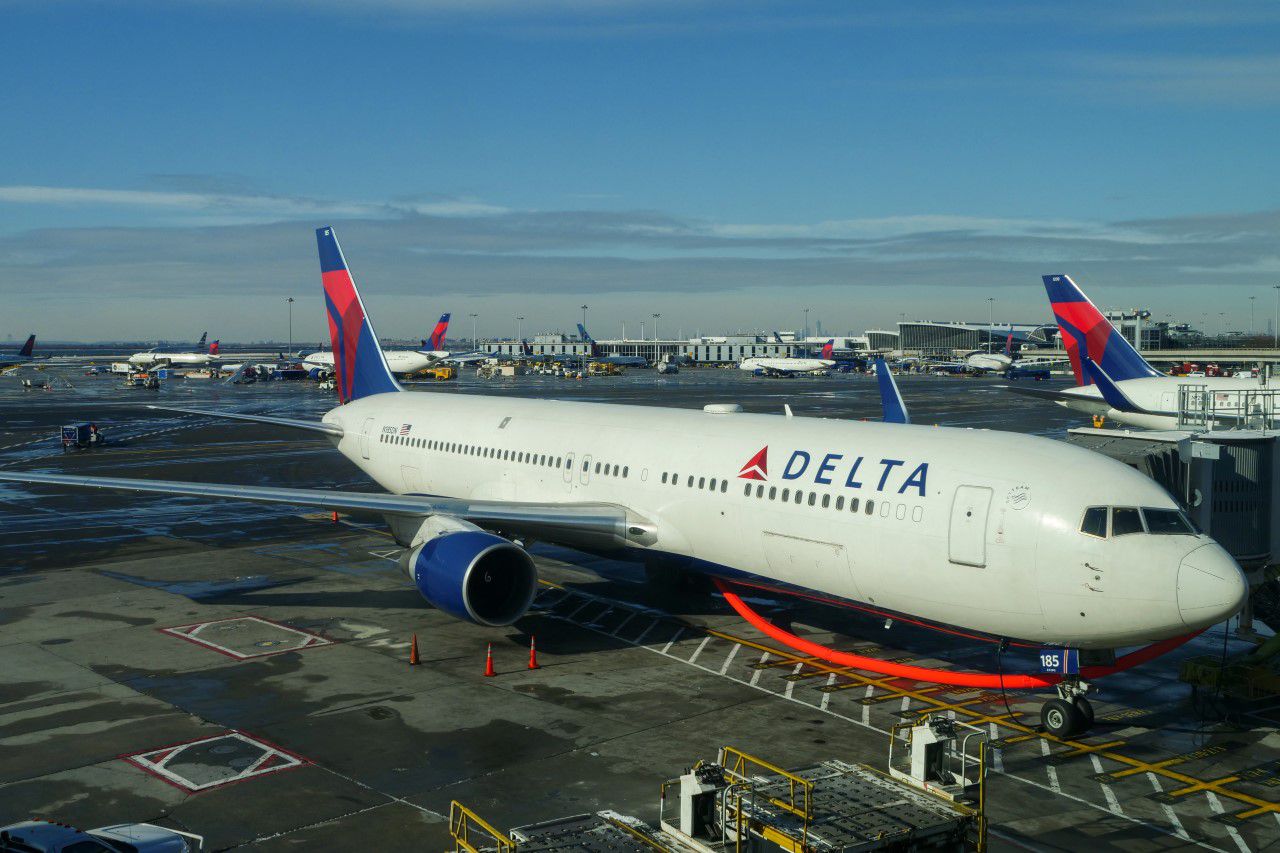 Beverage carts are gone from Delta Air Lines’ domestic flights. And getting on board is a lot less complicated.

The nation’s biggest airline, and the dominant carrier at Minneapolis-St. Paul International Airport, has overhauled the way it cleans airplanes and operates at airports and on Monday invited the media to take a look.

“We knew we were going to have to step up and deliver a whole new standard of cleanliness,” Bill Lentsch, chief customer experience officer for Delta, said after a tour at the airport. “Our position was we’re going to lead the industry in this.”

It’s a turning point in Delta’s response to the coronavirus outbreak, which since March has been focused on ramping down operations and cutting costs. Now, executives said they are trying to build confidence that flying is safe in a way passengers rarely used to worry about — for their health.

Most changes are permanent and backed by a new business unit inside the airline called the Delta Global Cleanliness group, Lentsch said. “They’re not here for COVID-19. They are here for the long run,” he said.

One change that may not be: Delta halted sales of middle seats and restricted seating capacity to 60% in economy cabins and 50% in first class. Executives will re-evaluate those limits in September.

Since March, Delta consulted medical professionals, cleaning experts, flight crews, customers and the contractors who perform most of its cleaning work. The result, said Lentsch, is more than 150 changes to procedures at check-in, boarding and turning around aircraft.

Between flights, cleaning crews now pull down the tray tables at each seat and spray the cabin with cleaning chemical from an electrostatic device, covering surfaces more completely than ordinary sprays. “This doesn’t miss anything,” said Craig Hutchison, director of U.S. Aviation, the contractor that cleans planes for Delta at MSP and most airports. 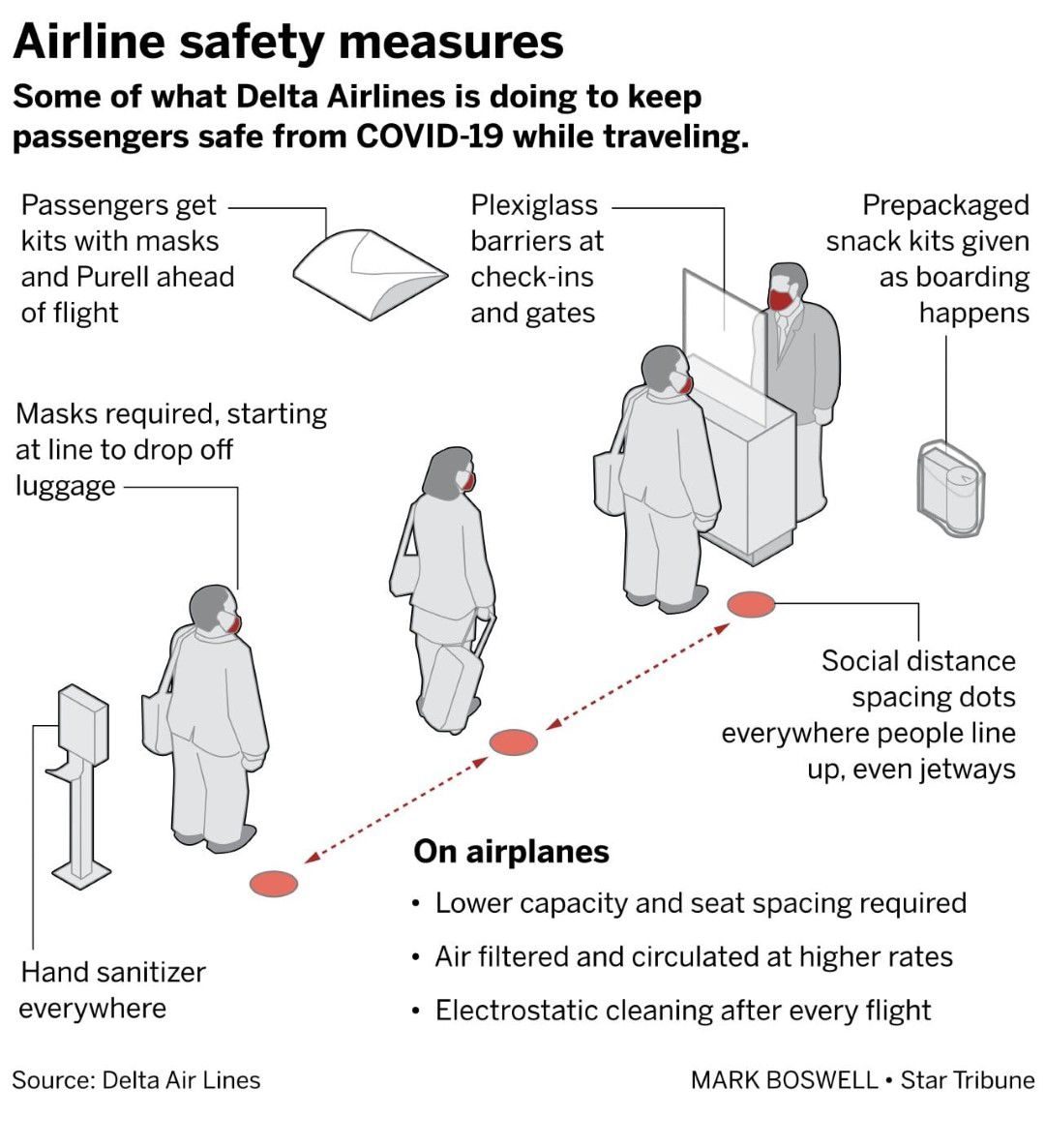 That process began early this year on international planes, became an overnight routine across Delta’s fleet, and is now happening after every flight.

For passengers, the changes are visible immediately during the check-in, where signage and queues encourage people to stand at least 6 feet from each other.

At the gate, Delta is now boarding passengers from back to front, ditching the complicated procedure that gave priority to passengers with the most expensive seats. That change, Lentsch said, happened in late March after a flight attendant sent an e-mail to top executives.

“We were boarding first-class customers and then we would parade the rest of our customers past to sit in the aft cabin,” he said. “She sent an e-mail with a recommendation we make some adjustments based on what she saw was some customer discomfort. We made that change the next day.”

The airline encourages passengers to wear face masks and provides them, along with hand sanitizer, at the entry for baggage check-in and at every gate.

Nearly all passengers wear masks, said Barbara Lilland, a Delta gate agent at MSP. But last week, she encountered a passenger who initially refused to wear a mask but then bargained with her that he would wear one if the pilot did.

“The captain and first officer walked up and both of them were wearing a mask and so the customer took one of our care kits and complied, which was great,” Lilland said.

On-time departures remain a top priority, she said, but gate agents and flight crews now check planes for cleanliness and decide jointly whether to proceed with boarding.

“This new level of cleanliness has added some steps for us as customer-service agents, flight attendants and pilots. Everyone involved has a new standard to meet to make sure the health and well-being of our customers is top of mind,” she said.

Lentsch said Delta’s sales teams have been meeting with its largest corporate customers to convey the depth of the changes and that most of the marketing about them is focused on business travelers.

“We do listen to all of our customers, but we pay particular attention to our business travelers because they make up the lion’s share of the flying that we do,” he said.