Thousands Of African Students Are Stuck In Ukraine 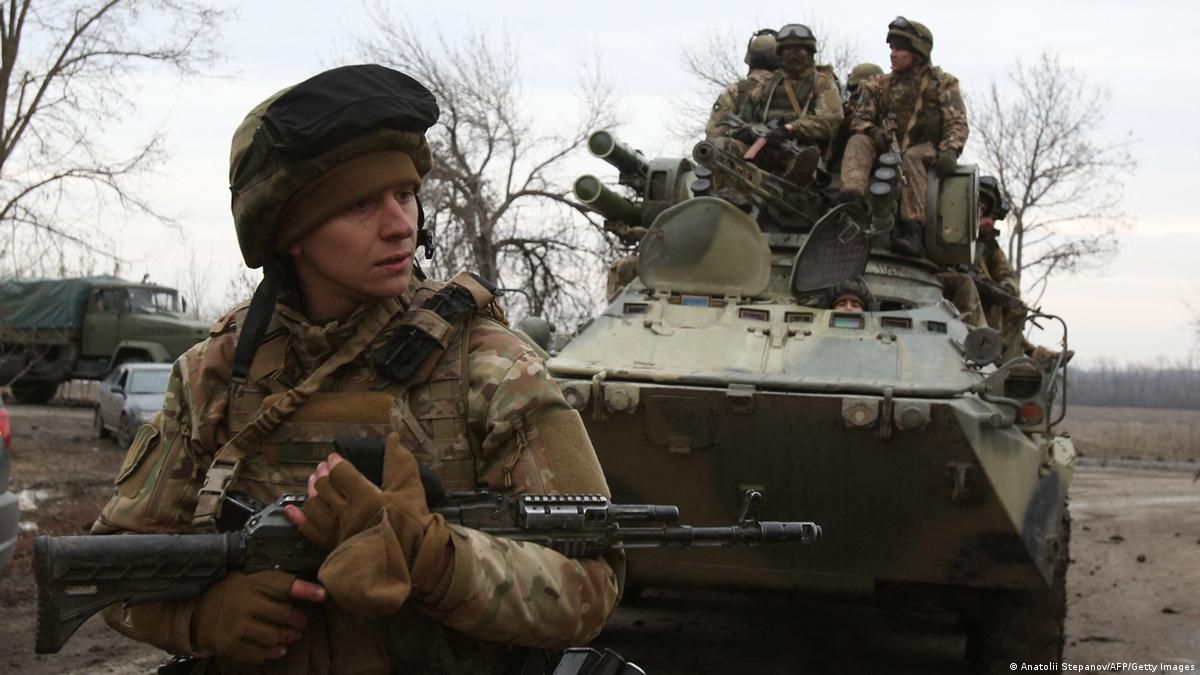 Thousands of Africans studying in Ukraine are desperate to leave as Russia invades the country. But, with flights grounded and other options limited, there isn't much that their governments can currently do.

"Everyone is under pressure — there have been explosions in different cities, including my city, Kyiv," 19-year-old Nigerian student Sarah Ajifa Idachaba, who is studying medicine in the Ukrainian capital along with her older sister, told DW.

"Me and my sister are in panic because we don't know what to expect. We are not safe and we are not sure about leaving here because the airport is shut down," Idachaba said after Russia launched an invasion of Ukraine early on Thursday morning.

Ukraine has closed its airspace to civilian flights, including from Kyiv airport, citing the high safety risk.

Idachaba said she and her sister felt abandoned as air raid sirens were heard across Kyiv and some residents sought refuge in metro stations and air raid shelters.

"We are citizens of Nigeria, and we need help. Please don't neglect us, don't leave us alone," she said.

"Honestly? We are scared — we don't know what to do. The information we are getting from Nigeria is basically that we are on our own," she told DW.

Nigerians feel left alone
About 4,000 Nigerians are currently studying in Ukraine. A number of them took to social media to share their frustration about the lack of information from the Nigerian government.

"President Muhammadu Buhari of Nigeria has already told his citizens in the Ukraine to help themselves," Ron Peters wrote on DW Africa's Facebook page. "It would have surprised many if he had offered help."

On Thursday afternoon, Nigerian Foreign Affairs Minister Geoffrey Onyeama said in a video released on Twitter that once airports reopened his government would assist with the evacuation of people who wanted to leave.

Morocco, Egypt acted early
Nigerians make up the second biggest group of foreign students in Ukraine. The biggest group are from Morocco with 8,000 students, while Egyptians are in third place with 3,500 students.

Nigerians point to the differing approaches of Morocco and Egypt in the lead up to the Russian invasion.

Two weeks ago, Morocco's government called on citizens to leave Ukraine as soon as possible, while the head of the Egyptian community in Ukraine, Ali Farouk, said last week that authorities in Ukraine and the Egyptian embassy were coordinating the return of Egyptian students.

No way of leaving Ukraine
Africans make up more than 20% of Ukraine's international students, studying in many different towns and cities throughout the country. Many are attracted by the country's good technical and medical schools combined with relatively low fees.

These students are also expressing their fear for their safety as explosions were heard in several parts of the country, including Kyiv, the second-largest city, Kharkiv, and the Black Sea port of Odesa on Thursday. 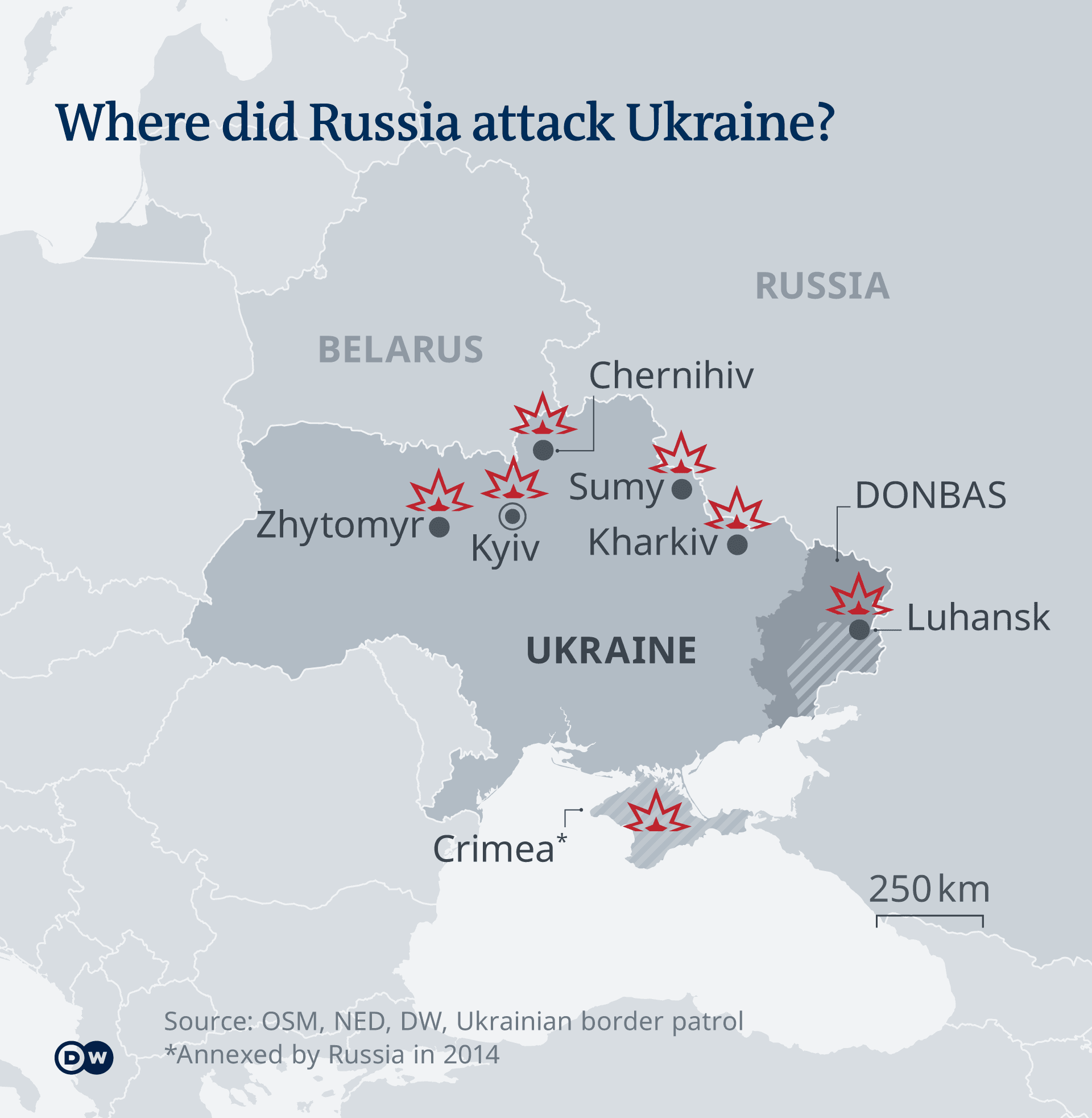 "We are very worried about our safety and will like to ask for assistance as regards evacuation from Ukraine to a safer place until the situation here in Ukraine is calm," Liberian Augustine Akoi Kollie, a fifth-year medical student based in Ternopil, in western Ukraine, wrote in a social media message to DW.

Though Zimbabwe has said it was prepared to fly its citizens out of Ukraine, Zimbabwean student Mellisa Charuvira told DW that the offer didn't help in the current situation because there was no way to leave Ukraine at the moment.

"There is no transportation — there are no buses from Kyiv to other cities," she said in tears.

Zimbabwe doesn't have an embassy in Ukraine. Its closest diplomatic representation is in the German capital, Berlin.

"We have called the ambassador of Zimbabwe in Berlin, and she said she is organizing something. Right now we don't have any protection. We can't get out through any border. My appeal is to evacuate us," Charuvira said.

'Stay indoors'
The Nigerian Embassy in Kyiv on Thursday advised Nigerian nationals living in Ukraine to "remain calm but be very vigilant and be responsible for their personal security and safety."

Richard, a Nigerian living in Kyiv who asked that his full name not be used, told DW that he is trying to follow that advice.

He said he could see people packing their belongs into cars and fleeing their homes.

Richard said many people hoped to head west, away from the border with Russia, in an attempt to reach safety on the Polish border.

"I will stay indoors," he said. "The roads are unsafe. My advice is to stay home. It's not good to make decisions when you are in a panic mode," he said.

He wouldn't even venture out to buy necessities, he said, as the "queues in front of shops and pharmacies are endless."

This article mistakenly wrote that Sarah Ajifa Idachaba was 23. She is 19. This article has been corrected to reflect this.