The Rudest Things You Can Do At The Beach 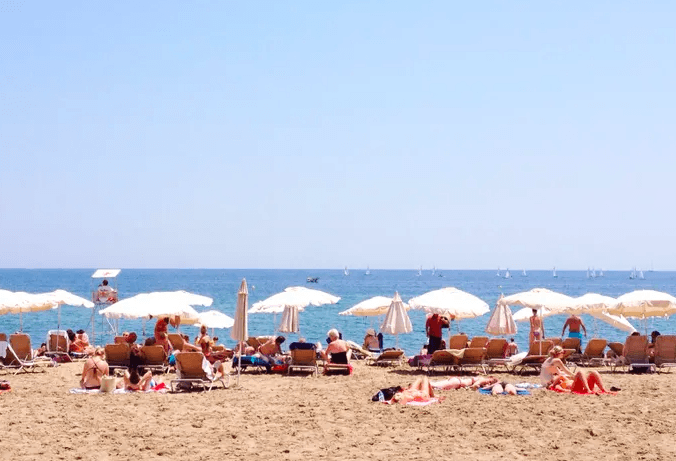 Spending a day at the beach can be an absolute blast. Your fellow beachgoers, however, can make it decidedly less enjoyable.

To help beach days more enjoyable for yourself and others, HuffPost asked Leighton and other etiquette experts to share some common faux pas they should avoid on the shore. Here are a few rude behaviors to avoid at the beach.

Encroaching On Others’ Space
“Find a spot that is at least three paces from other’s belongings,” suggested Jodi R.R. Smith, president of Mannersmith Etiquette Consulting. “The idea here is to give others a bit of personal space. The spacing should allow for beachgoers to walk between your towel and the other towel without kicking up sand on either.”

If it’s too crowded and you have to be a little bit closer to others, be extra careful as you walk by to avoid kicking up sand or otherwise disrupting their beach time.

“Don’t assume other people want to talk,” said Diane Gottsman, an etiquette expert, author of “Modern Etiquette for a Better Life” and founder of The Protocol School of Texas. “Watch their body language and if they engage, feel free to continue. If they put their ear buds in, it’s a sign they want to be left alone.”

Blocking Views
Be mindful of the people behind you as you set up your area as well.

“Many beachgoers like to bring all the comforts of home,” Smith said. “This is fine so long as it does not prohibit others from enjoying the sights. Your umbrella or tent should not inhibit other people’s ability to view the water.”

Ignoring Smoking Etiquette
Continue to be mindful of the people around you if you decide to smoke at the beach as well. That includes paying attention to where you smoke and what you do when you’re finished.

“If you are at a beach that still allows smoking and you want to light up, you will need to head way down the beach,” Smith said. “Do be sure to dispose of your butts appropriately. It can be quite dangerous for birds, dogs and children to ingest cigarette butts they have found ‘buried’ in the sand.”

Not Respecting The Local Wildlife
Of course, every beach is different, but as a general rule, it’s best to avoid feeding birds and other animals along the shore, as this can impact the local ecosystem. Take care not to disrupt them in other ways as well.

“Beaches allow us to connect with nature ― fish, snails and other living things,” Smith said. “While it is fun to pretend that starfish is your pet, it needs to be returned to the water before you go home.”

Shaking Sand On People
“It’s rude to shake your towel or sandy clothing near others or toward the direction of the wind,” said etiquette expert Juliet Mitchell, also known as Ms. J. “Sand in your mouth, in your eyes and on your body doesn’t sit well with others.”

Smith echoed this rule ― recommending a “gather, then shake” approach to the conclusion of your beach day.

“Walk away from the people before shaking any of your blankets and towels that have collected sand,” she said. “The windier it is, the further you need to go. This does make packing up a two-step process, but waving sand in people’s eyes is not a good way to end a great day.”

Playing Games By Others
“For any games, find a clear area away from other people,” Leighton advised. “Frisbees going overhead can make some people nervous.”

In the interest of respecting people’s space, establish some distance between your activities and other beachgoers ― both to avoid balls and other items whizzing by and for sand purposes.

“Set up your volleyball net away from other people,” Gottsman urged. “Same goes for playing games in the sand that involve kicking up sand.”

Making Noise
Another reason to set up your game far from others, cutting down on disruptive noise. Many people go to the beach for peace and relaxation.

“Things like music and loud cellphone conversations easily travel beyond the boundaries of your blanket and affect other people, so be mindful of what’s escaping your bubble,” Leighton said.

Pay attention to the volume and content of your conversations with your group as well.

“Watch your language, especially around children,” Mitchell advised. “Be respectful, be considerate and be civil. No profanity and no fighting.”

Leaving A Mess
There’s no excuse for leaving your beach area in a worse state than you found it. Littering is not just rude (and illegal), it’s dangerous.

“Please do not litter, especially purposely, and clean up your area before you leave,” Mitchell urged.

Not Following The Rules
Both public and private beaches have listed rules and guidelines, and it’s important to heed them.

“Follow the signs that act as warnings for your safety and the safety of others,” Gottsman said.

Familiarize yourself with different flags and what they mean. Don’t venture beyond the permitted limits.

“Boundaries are set for a reason,” Mitchell said. “Stay within the ‘swim boundaries’ or other boundaries that could cause harm to yourself or others.”

And don’t just adhere to the explicitly written rules.

“All etiquette is local and it’s important to learn and follow the local customs,” Leighton said. “Every beach has its own.”