The FBI's Secret Weapon In The Capitol Attack Manhunt 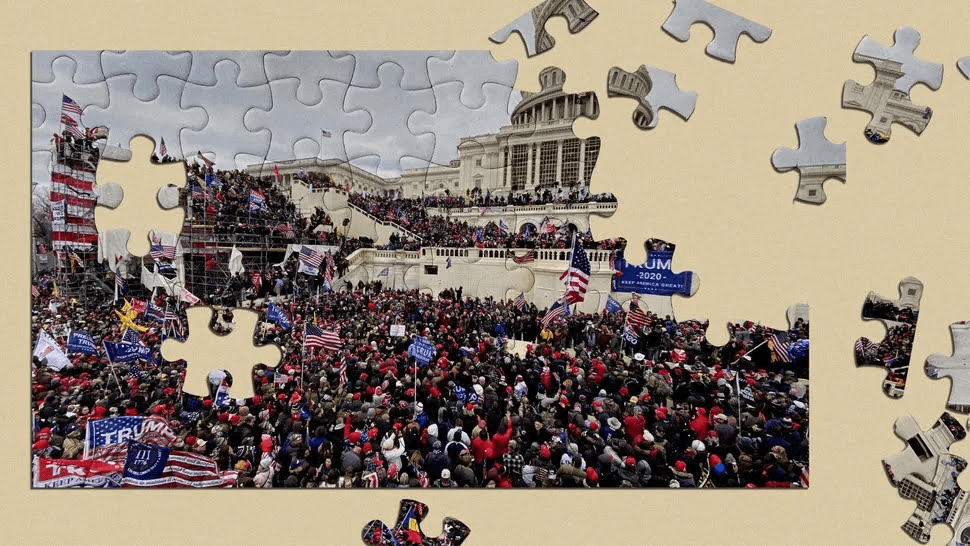 A band of online sleuths called "Sedition Hunters" has had an enormous effect on the Jan. 6 investigation. Next up: Holding the FBI’s feet to the fire.

They are some of the Federal Bureau of Investigation’s most critical assets, and federal authorities don’t know many of their names. Or exactly how many of them there are.

One year into an unprecedented investigation of the thousands of rioters who stormed the U.S. Capitol on Jan. 6, 2021, the FBI is leaning on a band of digital investigators to both identify suspects and piece together an overwhelming mountain of evidence from that day, much of which was recorded by the perpetrators themselves. The crowdsourced effort, organized on social media last year in the wake of the Capitol attack, has affected hundreds of the more than 700 cases that federal prosecutors have brought in the past 12 months.

There’s much, much more to come. The digital investigators have successfully identified hundreds of individuals who were captured on video committing crimes on Jan. 6 but have not yet been charged, including dozens and dozens of violent rioters whose images are featured on the FBI’s U.S. Capitol Violence website.

“Sometimes it feels like we’re way ahead of them,” one sleuth told HuffPost. “And then sometimes they arrest someone or release new security footage and it smacks us in the face with how much more there is to uncover.”

The sleuths have a wealth of information that the broader public won’t learn for months. They know that two suspects currently on the FBI’s website are related to defendants who have already been charged with lesser offenses in the Capitol riot. They know that someone else on the FBI list died suddenly a few months ago. They know that another suspected participant in the Jan. 6 attack has been arrested in connection with a long-unsolved murder. And they’ve compiled information that likely will never land in an FBI case: like the fact that there were more than 50 dogs among the mob on Jan. 6.

The FBI’s Capitol riot investigation was pretty chaotic in the early days as the bureau attempted to separate the wheat from the chaff amid hundreds of thousands of tips from the public. It could be difficult for investigators with rock-solid tips to get the bureau’s attention.

But there’s been a shift as the investigation has progressed. Citizen investigators who previously had to submit their tips through forms on the FBI’s website now either have individual relationships with FBI special agents or at least know someone who can ensure the information gets into the right hands. If they turn up relevant information about a defendant who has already been charged ― say, evidence of a misdemeanor defendant assaulting an officer, or a defendant on pretrial release violating the conditions of their release ― sleuths have reached out to federal prosecutors directly.

Their meticulously compiled dossiers are so in-depth that in some cases they effectively ghostwrote FBI affidavits, laying out bulletproof cases against Capitol rioters based on open-source intelligence alone. Their crowdsourced Capitol maps and catchy nicknames for Jan. 6 rioters have shown up in Justice Department filings time and time again. Many of the sleuths are still astonished at the effect they’re having in the largest FBI investigation in the bureau’s history.

“I’m just some idiot sitting here in his garage,” another investigator at the center of the effort told HuffPost. “How the hell is this happening?”

'The Tips Matter'
The record that online sleuths have built since last January is impressive. They’ve played a key role in identifying many of the most serious cases against Capitol riot suspects. They’re at the center of the longest sentence imposed in the Jan. 6 investigation so far: Robert Scott Palmer, who turned himself in to the FBI just 12 days after he was identified in a HuffPost story based on a tip from an online sleuth, was sentenced to more than five years in federal prison. Online investigators also helped identify the perpetrator of one of the most serious attacks of Jan. 6: Daniel Rodriguez, who drove a stun gun into the neck of former D.C. Metropolitan Police Officer Michael Fanone.

Among their other highlights in the past year:
- In the aftermath of an FBI raid on the home of an Alaska woman who the bureau mistakenly believed had entered House Speaker Nancy Pelosi’s office on Jan. 6, online sleuths managed to correctly identify the true suspect and her son in roughly 30 minutes. Building off of the tip, the FBI arrested the actual suspects months later.

- After couring hours of video footage from then-President Donald Trump’s “Stop the Steal” rally, held near the White House just before the attack, online sleuths managed to find a full image of the face of a suspect they’d nicknamed #CatSweat because he was wearing a Caterpillar sweatshirt when he battled officers and helped drag one officer down the stairs of the U.S. Capitol. A facial recognition hit turned up images of Logan Barnhart at bodybuilding competitions and posing on the covers of romance novels, and sleuths confirmed his identity by matching items of clothing he was wearing on his Instagram page.

- Hours before a sentencing, investigators turned up evidence of a misdemeanor defendant appearing to assault an officer by shoving him down the stairs when he was surrounded by a mob. Prosecutors, who had initially sought a sentence of two months behind bars, requested a delay of the sentencing and advocated for six months’ incarceration (the defendant ultimately received three months).

- Following in sleuths’ footsteps, the FBI used Facebook photos posted by a suspect’s mom to confirm the identity of a young man accused of pepper-spraying officers and smashing out a window at the U.S. Capitol and who then went to Air Force basic training (which his mom also bragged about on Facebook).

The community of online sleuths has also helped shut down some of the conspiracy theories that have cropped up in the wake of the Jan. 6 attack. When an attorney for several Capitol riot suspects told Tucker Carlson’s Fox News viewers that a man wielding a police shield while wearing a “Keep America Great” hat and red face paint was “clearly a law enforcement officer” and an “agent provocateur,” online sleuths moved to swiftly gut the conspiracy theory. They revealed the man’s actual identity as a St. Louis Cardinals superfan who calls himself “Rally Runner.” He has been running around Busch Stadium (and praising Trump and Carlson on his Facebook page) for years.

Online sleuths have often been frustrated with the pace of the FBI investigation and have sometimes been left speculating about why cases against suspects they’ve identified as violent aren’t moving forward even months after they had been identified for the bureau.

But inside the FBI and Justice Department, it’s undeniable that online investigators have had a major influence. In recent months, authorities have made several gestures, both privately and publicly, to illustrate to the online investigators how much their efforts are appreciated. Attorney General Merrick Garland even referenced the work of “citizen sleuths around the country” during a congressional hearing in October.

“As we have seen with dozens of cases so far, the tips matter,” a bureau official said in a statement. “While it may appear that no overt law enforcement action is being taken on some tips that have been submitted, tipsters should rest assured that the FBI is working diligently behind the scenes to follow all investigative leads to verify tips from the public and bring these criminals to justice.”

'Give That Fan a Contract'
After he was abducted and viciously assaulted by members of the pro-Trump mob on Jan. 6, Officer Fanone thought that might be the end. Law enforcement was overwhelmed that day and didn’t have the manpower to control and arrest the violent rioters amid a crowd of thousands flooding into the Capitol building.

Fanone has been blown away by what anonymous investigators have turned up after poring over the extensive footage filmed at the Capitol on Jan. 6 and matching that up with information available on the open web. A few months back, Fanone was able to meet Forrest Rogers, now an open-source investigator with Switzerland-based newspaper Neue Zürcher Zeitung, who, as a member of the sleuthing group Deep State Dogs, first turned up the footage of Danny Rodriguez driving the stun gun into Fanone’s neck. Rogers had gone through the video frame by frame.

Rogers ran into roadblocks trying to get in touch with someone at the Metropolitan Police Department to tell them about the video in the wake of the attack, which frustrated Fanone because he thought it should have been very clear that Rogers “knew what the fuck he was doing.”

The progress that online sleuths have made from behind their computer screens has left the former undercover officer wondering whether law enforcement needs to reconsider what sort of skill sets they look for in recruits.

“How was it that this mass of civilian sleuths were able to compile all this information and so rapidly?” Fanone asked.

“I grew up going to Baltimore Orioles games with my dad, and every time someone hit a home run and a fan caught it… they would say, ‘Give that fan a contract,’” Fanone said. “Maybe we need to be changing what it is that we’re looking for in our hiring, because I sure as shit don’t know how to do any of that crap. I still fucking turn off my computer by pulling the plug.”

'We're Not Going to Let it Slide'
Sleuths have logged more than 2,300 individuals who entered the U.S. Capitol on Jan. 6. Combined with the hundreds of suspects on the FBI’s Capitol Violence webpage, that brings the total universe of potential Capitol riot defendants to nearly 3,000.

Of the hundreds already identified, many seem to have no clue what is coming for them. Living in their right-wing social media cocoons, they seem blissfully unaware that they’re in the sights of online sleuths and the FBI.

“Donald Trump will be back in office SOON and a revival like we have never imagined is swelling as we speak,” one Jan. 6 suspect identified by sleuths, but not yet arrested, wrote online in recent months.

The Sedition Hunters community isn’t going to let up. As the investigation matures, they could begin to transform into what one sleuth called a “powerful lobby” that can hold the FBI’s feet to the fire, making sure that participants in the Jan. 6 riot face justice for attacking democracy.

“We know who these people are,” one said. “We’re not going to let it slide.”