By Rose White via MLive 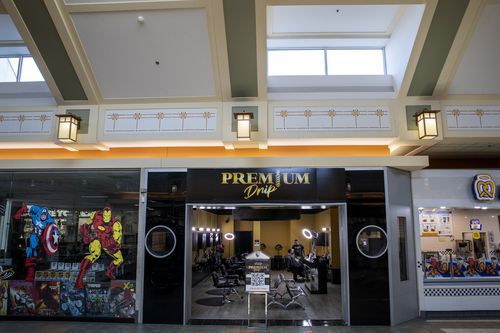 The self-taught son of a Muskegon hairdresser was in middle school when he started making $50 a week on $5 haircuts. After 16 years of honing his craft, Gordon now owns a barbershop inside the Lakes Mall where clippers buzz next door to an Auntie Anne’s and across the hall from a comic book store.

“The mall can work out and be a good starting point for a new, upcoming business,” he said after opening Premium Drip in 2020. 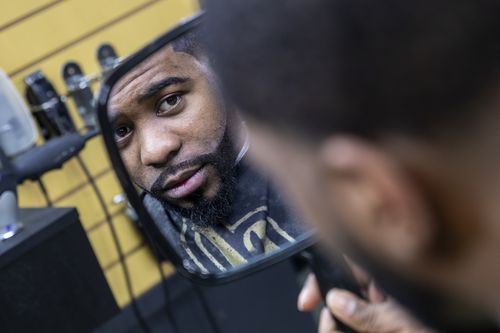 Malls have faced a gloomy forecast in recent years, with about 25% reportedly predicted to close within five years and the national vacancy rate hovering around 10%, according to Moody Analytics. But as shopping centers look for new ways to attract customers—in part by attracting a mix of tenants—Black entrepreneurs are filling vacancies at malls across Michigan. 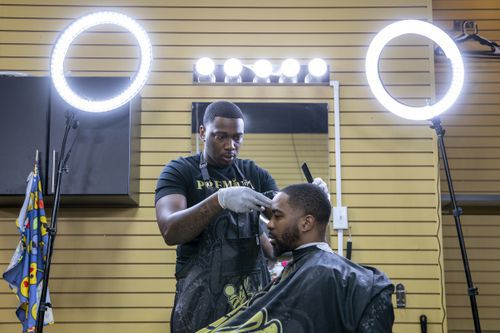 “When I see all the stores leaving the mall, I see that as a great opportunity,” Gordon said.

At The Lakes Mall, a 645,000-square-foot retail hub in Muskegon tucked between two western Michigan highways, general manager Tom Suzka envisions revitalizing the space. Local businesses have filled some vacancies and the former Younkers, an anchor store until shutting down in 2018, is currently being renovated.

“We are exploring all our options as it relates to new and different tenants, and there are certainly efforts underway to attract local vendors to The Lakes Mall,” Suzka wrote to MLive. “We’ve already seen quite a bit of interest at the local level, which has been very exciting.”

Despite the grim forecast for malls, recent data provides some hope.

Indoor mall foot traffic is starting to rebound jumping 16.8% from February to March, according to data from analytics firm Placer.ai’s Mall Index. The report also shows visits are up from a year ago and nearly reached pre-pandemic levels in mid-March.

Michael Williams II found a home for his recording studio in a former Victoria’s Secret.

The owner of Platinum Keyz Recording Company, Williams initially turned down the idea of setting up shop in the Lansing Mall because of its limited hours. But after being offered 24-hour access and touring the space with a leasing agent, he was convinced.

“She turned all the lights on, and it was like diamonds were in the floor and the angels were singing,” he said. “And I instantly knew as I walked through where I was going to place everything. I knew in my mind and my heart this was the place where I was going to be.”

“To actually be in a public area, it caused more excitement to be in here,” he said. “It’s not just shopping but it brings foot traffic.”

Ajaune Thomas launched The Sweetest Events with her mother, Ajaunta Turner, after a few years of assembling balloon sculptures for friends and family. She eventually outgrew her home business and moved into the Lansing Mall in late 2019.

“Our thing with the mall was just to get our name out there more,” Thomas said. “It’s so many different walks of life coming into the mall, so you get that diverse customer experience.”

Using a backdrop of greenery, colorful table clothes and balloon arches suspended in the air, Thomas transforms the venue space into a scene for birthday parties or baby showers. She says customers can be hesitant about hosting their events in the mall, but it’s becoming more of a “social norm.”

“I think it’s very valuable for the mall to look for ways to stay open,” she said.

Although the Lansing Mall is still home to traditional tenants like Auntie Anne’s and J.C. Penney, it has recently reimagined its portfolio by welcoming a Black-owned movie studio, a diaper bank and a nonprofit that serves youth in seven counties.

Both Williams and Thomas see the potential for the 706,925-square-foot mall to bounce back.

“Our main thing is we want to see this Lansing Mall flourish and revive itself even after the pandemic,” Williams said. “A lot of major businesses walked out because of situations and everything else, but I believe that provided an opportunity for people like myself, who otherwise wouldn’t have even thought of the mall, to come in.”

Other malls, like Woodland Mall in Grand Rapids, are actively recruiting minority- and locally owned businesses. About 18% of the businesses in Woodland Mall are minority owned, including a haircare vending machine called Fabulous Creations, and about 27% of the tenants are locally owned.

Woodland Mall also led the effort to host the first Black-owned business expo among the 19 PREIT malls, its parent company.

“Whenever we host the Black-owned expo, that is the starting point,” said Mikia Ross, interim senior marketing director at Woodland Mall. “It’s almost a canvassing effort for our leasing efforts that we are able to talk to these tenants and give them an opportunity.”

And Brookfield Properties, another mall ownership group, plans to invest $25 million to help Black and minority business owners open stores in their malls. Applications opened in April for three Michigan malls, Rivertown Crossings in Grandville, Southland Center in Taylor and Grand Traverse Mall in Traverse City, and the program will launch nationwide later this year.

For Williams, who always dreamed of running his recording studio in Lansing, he believes all these factors feed into rejuvenating the Lansing mall: the more businesses that set up shop, the more people will visit.

“I love being here,” Williams said. “I never dreamed about being here, but it’s really pushed us to a new level.”