Slavery Is Detroit's Big, Bad Secret. Why Don't We Know Anything About It?

By Bill McGraw via Deadline Detroit 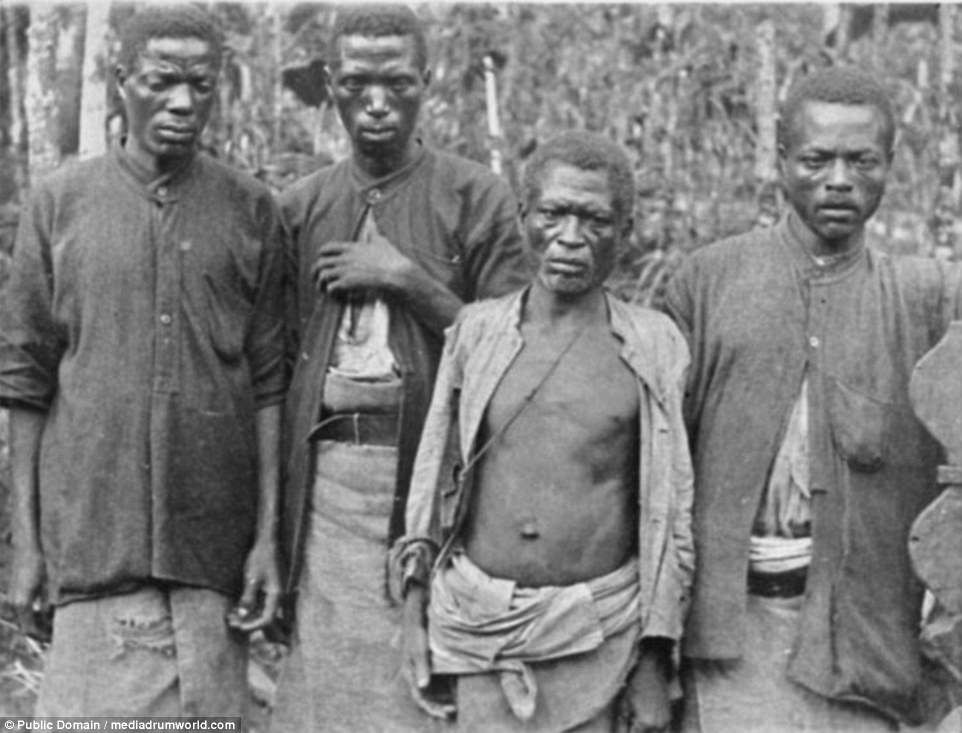 This piece, by Deadline Detroit's co-founder, was originally published in 2012. We republish it as recent events cast a spotlight on this aspect of U.S. history. 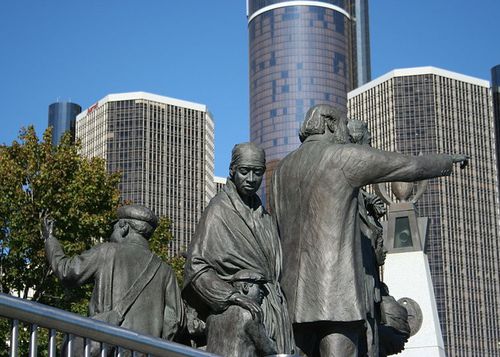 Metro Detroiters love to celebrate their local history, especially when it involves the noble, magnificent and world-class chapters of the past: The auto industry. Motown Records. The Underground Railroad. Diego Rivera. Coney Islands.

On the other hand, local history has its crazy uncles. Those are chapters that might be fascinating and important, but they are hidden in the back room and rarely talked about. Henry Ford’s anti-Semitism, taking land from the Indians, the Free Press’ 19th Century racism and the auto companies’ early abuse of workers come to mind.

Then there is the granddaddy of all forgotten local history. The subject no one talks about, virtually ever. The most neglected topic of all.

Slavery in Detroit has remained an enormous secret. It is an essential chapter in Detroit’s 311-year story, but it has been pushed back into archives and covered up by decades of neglect and denial. Few people, even well-informed college graduates, know that slavery played a key role in the growth of Detroit, and wealthy Detroiters owned slaves for the first 120 years of the city's existence.

When metro Detroiters talk about slavery, they talk about black men and women picking cotton in Georgia and Mississippi because that is what students in southeastern Michigan learn in school.

Yet slavery is very much homegrown. What has been called the “national sin” is also Detroit’s sin. It is the origin of our racial crisis, our peculiar institution, our “necessary evil.” Slavery belongs to Detroit just like slavery belongs to Charleston, Monticello and New Orleans.

Detroit’s first mayor, John R. Williams, the namesake of two streets in Detroit – John R and Williams – owned slaves. The Catholic Church in Detroit was heavily involved in slavery – priests owned slaves and baptized them, and at least one slave worked on the construction of Ste. Anne’s Church around 1800. The men who funded the Free Press when it was founded in 1831 were ex-slave owners, and the paper supported slavery during the national debate before the Civil War.

The work of slaves helped build Detroit. And just like in the South, slavery in Detroit was reinforced by violence. Slaves worked without any pay for their entire lives, under threat of the lash and death. 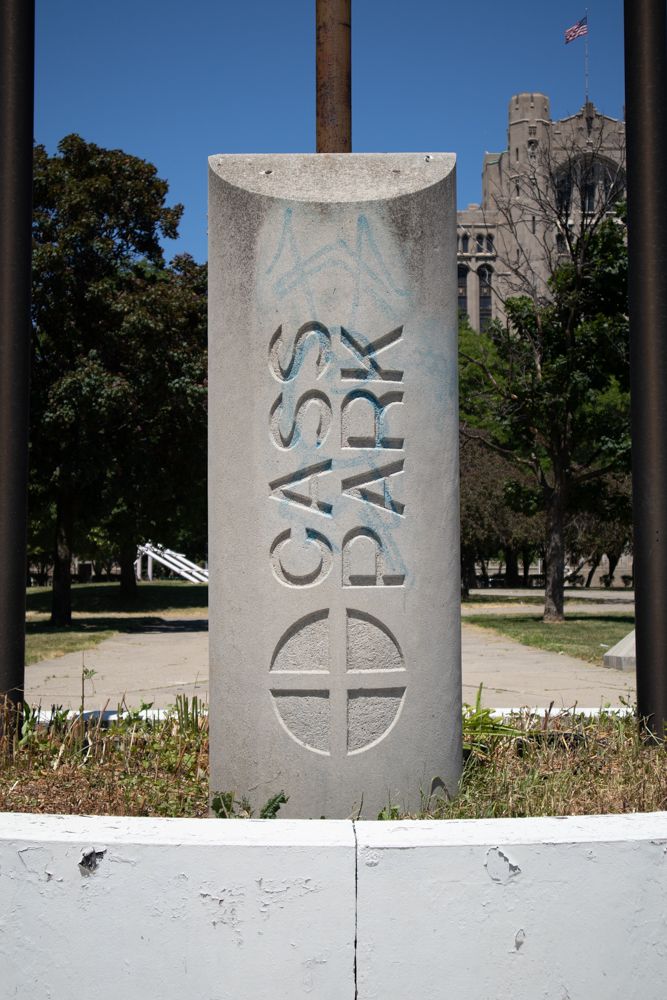 Owners used their power over slaves to steal their labor and enrich themselves. Slaves arrived in Detroit stripped of their identity, culture, family and often their name. They were frequently maimed from torture.

Slaves died, often young, and were buried in graveyards that were soon forgotten, and then paved over by later generations of Detroiters, and their bones remain underfoot in America’s blackest big city, and their stories continue to be unknown in a region where race always has been a consuming issue.

Slavery was as much a part of early Detroit as the fur trade. Most residents who could afford slaves owned them during Detroit’s French, British and early American periods, from the city’s founding in 1701 to the second decade of the 19th Century. In 1750, for example, toward the end of the French regime, more than 25 percent of Detroit residents kept slaves.

“Not surprisingly, Detroit’s slaveholders came from the wealthiest segment of French society and produced a disproportionate amount of the village’s grain and livestock,” writes Brett Rushforth in “Bonds of Alliance,” a new book about slavery in Quebec and the Great lakes area in the 17th and 18th centuries.

Rushforth’s book touches upon the subject of slavery in Detroit, and in so doing he helps raise the veil on the city’s hidden history. Another academic, the University of Michigan’s Tiya Miles, has begun researching the subject, and earlier this year she told NPR’s Michel Martin that slavery “had a multilayered aspect in Detroit.”

There are almost no physical reminders of slavery left in Detroit. But one artifact that remains is a scarred and cracked account book that has yellowed and brittle pages. It sits in storage in the Burton Historical Collection at the Detroit Public Library. The book belonged to William Macomb, the richest person in Detroit when he died in 1796.

Macomb owned Grosse Ile and Belle Isle and several houses and page after page of livestock, tools and furniture. Macomb also owned people. Listed prominently near the front of the book along with things like shovel tongs, saddle bags and goats, are the names of, or references to, 26 human beings: Scipio, Tom, Guy, Charlie… Only one, Jim Girty, had a family name. Together, the slaves’ total value was listed as 1,655 pounds in New York currency. 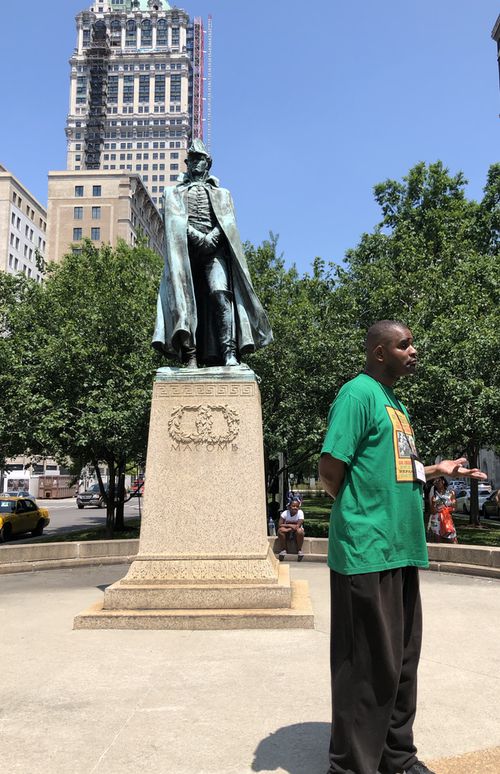 In his will, Macomb wrote: “I give and bequeath to my loving wife, Mrs. Sarah Macomb, for her own use, all my moveable estate wheresoever…my slaves, cattle, household furniture, books, plates, linen, carriages and my utensils of husbandry.”

I examined that book last week, with a librarian and photographer. It is stark. We acknowledged that it felt strange to look at a simple page with lovely penmanship that represents a national horror involving so much human suffering.

Detroit’s history of slavery is complicated by the fact that African Americans were not the only people held in captivity. Native Americans were also enslaved here, especially during the early decades of the 18th Century when the French ran Detroit.

Indian slavery pre-dated the arrival of Europeans, and it was a very different system than the form of black slavery that Europeans brought to North America. Indians did not consider slaves property, and in native culture slaves possessed symbolic value, and were used as gifts during trade and negotiations, and to take the place of dead warriors.

Eventually, though, Indian slavery mixed with European slavery and produced a hybrid form of bondage that played a major role in relations among Indians and Europeans in Detroit throughout the 18th Century.

Slavery was important, for example, in the interaction between men and women. Traders in Detroit’s early days used female Indian slaves as backcountry wives, both for companionship and as a way to ingratiate themselves with the women’s relatives, which enhanced the traders’ ability to do business with the Indians.

During the British era, one of Detroit’s most successful traders was John Askin, who had three children with an Ottawa woman named Monette, a slave he owned and later freed. Askin was known for his aggressive business tactics, including plying Indians with alcohol. His papers, also preserved at the Burton Collection, show he bought and sold several native and black slaves during his career.

“Sexual violence permeated the slave experience” in the Great Lakes, wrote Rushforth. Many women, he added, like Monette, eventually rose to social acceptance and freedom, but not before a “prolonged submission to what could be defined as serial rape.”

Whether male or female, life was harsh for slaves on the Detroit frontier. They generally slept on the kitchen floors of Detroiters’ homes, and the record is clear that owners did not hesitate to flog their human property when they believed discipline was called for.

Yet in slavery's scale, Detroit was not South Carolina. Detroit’s simple trading economy, small population and modest farms did not require large numbers of slaves, and slaves in Detroit generally lived in closer proximity to their owners than slaves in the south.

Slaves never exceeded 10 percent of the population in Detroit; in the south before the Civil War, slaves made up 33 percent of the population. In Detroit, Macomb was the biggest slave owner, with a couple of dozen slaves; in Virginia, Thomas Jefferson owned some 600 slaves in his lifetime. Jorge Castellanos, a former professor at Marygrove College, once wrote that Detroit was not a “slave society,” but a “society with slaves.”

Grosse Ile, once owned by William Macomb, is the largest island in the Detroit River. Residents have done a lot to keep alive the community’s long history. But no one knew anything about the Macomb family owning slaves until Joel Thurtell, a Detroit Free Press reporter, brought it to their attention while he was doing a story in 2007.

I have two friends whose roots in Detroit go back to the French period of the early 1700s. When I told them their ancestors had owned slaves, they thought I was joking. One friend, who had researched her family’s history, was flabbergasted when I broke the news.

“NO WAY!” she said. “Wow! Nobody told me anything about that, but I guess they wouldn’t. I am just embarrassed. That’s interesting. Fascinating.”

They are hardly alone in their obliviousness. Students of local history could research Detroit’s past for years before they would stumble across evidence of slavery. Since the early 1970s, slavery in Detroit has been the subject of research by a small number of scholars, who wrote academic articles that were mostly read by other academics and advanced students.

One graduate student, Arthur Kooker, wrote his doctoral dissertation in 1941 at the University of Michigan on abolitionists in Michigan before the Civil War. In his preface, Kooker wrote about his surprise when he discovered slavery itself had existed in Michigan.

“As the work progressed one fact that seemed to require an exploration kept bobbing up,” he wrote. “Rooted deep in Michigan’s past was the very institution which had called the antislavery movement into being.”

During the first years of the 21st Century, many Americans discovered the story of slavery in the United States, especially as it existed outside the south. Prodded by activists and historians, a number of institutions and individuals acknowledged their historic ties to slavery and other extreme racist behavior, and in many cases asked for forgiveness.

Ira Berlin, one of the nation’s foremost historians of slavery, wrote in 2006 that “slavery has a greater presence than at any time since the end of the Civil War.”

Slowly, the curtain has begun to rise across the country on slavery and other forms of historical racism. Most notably, the collective amnesia is disappearing that allowed the north to absolve itself of involvement in slavery while castigating the south. People are realizing that understanding slavery is central to understanding the origins of America itself.

Detroit’s selective memory, however, has remained intact. Almost nothing has been done to seek out the truth about the role of slavery in Detroit’s history. And that seems unfortunate in a region where the theoretical underpinning of slavery – racism – remains a paramount issue.

It’s not a happy story. It’s probably not a coincidence that we celebrate the uplifting saga of the Detroit and the Underground Railroad rather than the tremendously sad story of Detroit and human captivity. For a nation – and city -- built on the notion of freedom, to consider the idea that slavery was also a major part of the foundation is difficult and disillusioning.

“Slavery is the ground zero of race relations,” Berlin has written. “There is a general, if inchoate, understanding that any attempt to address the question of race in the present must also address slavery in the past.”