Should Remote Work Pay Be Based On Location?

With more employees choosing to work from home, many companies are rethinking how location factors into salary. But are they thinking fairly? 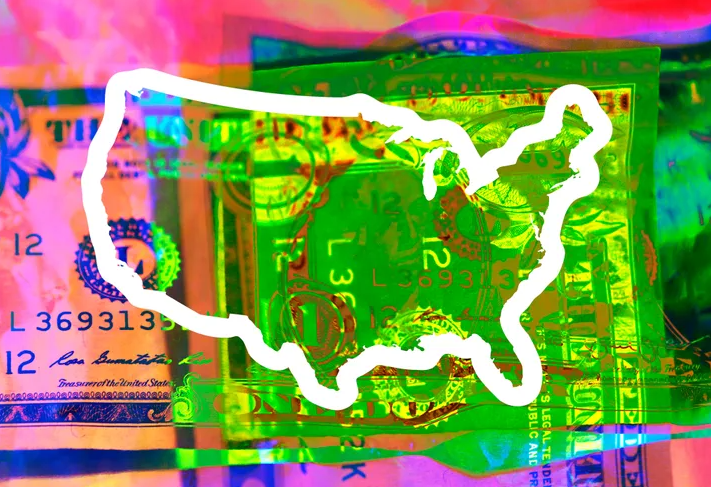 Should working remotely or in a less expensive city determine how much you are paid for a job compared to peers doing the same work?

For the past 12 years, Brian Hartvigsen has worked remotely from Boise, Idaho. Now an engineering director for the analytics platform ChartHop, he first began working remotely shortly out of college for OpenDNS in 2009.

At first, he didn’t realize that where he lived played a factor in his compensation. He figured he was doing a job and was going to be paid appropriately for that job. “A little naive on my part,” he said.

But as he took on management roles at OpenDNS and later for Cisco, which acquired it, “it was very apparent that there was this idea that one of the benefits of hiring remote people was cheaper labor,” he said.

Hartvigsen eventually realized that he was being paid less than his peers because he was working in Boise. “It was a major letdown,” he said. “For some reason, my geography meant that I was of less value. And that sucked. It can be very demotivating too.”

As a manager, Hartvigsen could view the geography-based pay bands for every position that could possibly report to him. Having direct reports making more money than he did didn’t bother him, Hartvigsen said, but having location be the reason for the different compensation packages did.

“When the only reason that they’re making more money than me is where they live, not the work that they’re doing, that is a problem to me,” he said. “Knowing that if I extended an offer for the exact same position to someone in San Francisco versus someone in Austin, Texas, versus someone in Boise, Idaho, that was going to be three different pay scales, and on top of that, three different sign-on bonuses. ... Entire compensation packages were dramatically changed based on where you were. It just never felt right.”

A Cisco spokesperson declined to detail how the company bases salaries and stock allocations on geography. “We design our compensation packages to be competitive with local talent markets and assess each employee individually to determine the right pay level for their role, experience, and performance,” they told HuffPost. “We also regularly review compensation levels to ensure employees are paid fairly and competitively among the respective market and Cisco colleagues, regardless of if the person works in an office or remotely.”

Hartvigsen said he explored moving to the San Francisco area for OpenDNS, but he had already built his life in Boise. After growing up in a military family, he did not want to move his own four children around.

“I live a decent life, but I could not have moved my family to the Bay Area and bought a home,” he said, adding that even when other job offers included relocation assistance, “I’d still have been behind in terms of financial stability compared to someone else who was my age, my time in career and had been in those markets the whole time.”

Although Hartvigsen said location-based pay bands weren’t a direct reason he left Cisco this summer, it was something he asked prospective new employers about in job interviews.

“I didn’t want to continue in that cycle ― not just for me, but also for people that I hire,” he said. “If I hire someone in Boise who is doing the same work as someone in the Bay Area, to me they should be compensated equally.”

Some companies are getting rid of pay scales by location.

The coronavirus pandemic was a wake-up call for many employers and employees that the old way of doing work wasn’t working ― at least for everyone. One July survey of Americans who began working remotely during the pandemic found that 65% said they’d be willing to take a 5% pay cut in order to keep doing so full time.

Companies including accounting firm PwC and big tech firms including Facebook, Microsoft and Google took note of this demand. They’re now allowing employees the opportunity to continue working from home where they like, but have made potential salary adjustments a condition of doing so in less expensive markets.

But a growing number of companies are also taking a location-agnostic approach to pay. Last year, Reddit eliminated geographic compensation zones for U.S. employees, announcing it would instead tie pay ranges to high-cost areas such as San Francisco and New York, regardless of where U.S. staff members live. The cloud software firm Okta decided in April to stop making salary adjustments when employees move, unless the move is to a new country or results in a new position. And last month, Zillow’s chief people officer, Dan Spaulding, announced that the company’s compensation packages would now be tied to “role, responsibilities and performance” and that employees can relocate within the U.S. and Canada without a salary penalty.

“When you work for Zillow, your long-term earning potential is determined by how you perform, and will not be limited by where you live,” Spaulding wrote in a LinkedIn post. 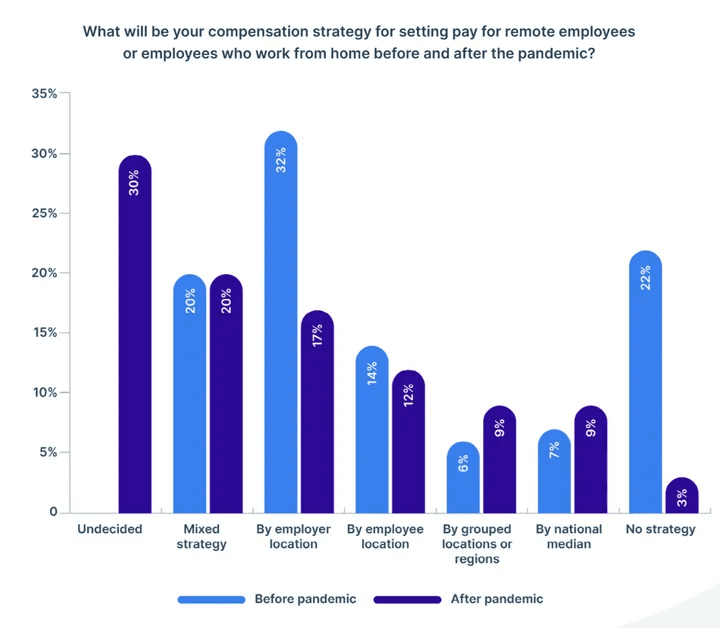 PAYSCALE’S 2021 STATE OF REMOTE WORK REPORT
Many companies are rethinking their strategy for compensating remote employees after the onset of the pandemic.

Since the pandemic began, there’s been an uptick in companies determining geography-based pay based on where employees reside, rather than where the company maintains offices. Before the pandemic, 32% of companies were using the location of their headquarters to set pay for remote employees, according to a summer Payscale survey of human resources leaders and compensation professionals who worked mostly in tech but also in fields including manufacturing, nonprofits and finance. That number dropped to 17% after the pandemic began.

Amy Stewart, author of Payscale’s resulting “State of Remote Work” report, told HuffPost that companies typically calculate regional pay scales by applying a “geo differential” ― a percentage variation that adjusts pay for the difference in the cost of labor between locations. She noted that although paying remote workers based on the employer’s location can make that employer competitive when the employer is based in an expensive area, it doesn’t work the other way around.

But many of the companies that have publicly sworn off geographic-based pay differences are based in expensive areas, and cite the desire to stay competitive as a reason. In a blog post about the change, Reddit said it would “attract top talent by not requiring people to relocate and increase the diversity of our workforce in the process.”

Is it fair to suffer a salary adjustment for moving or working remotely?

When the pandemic hit, Hartvigsen’s CEO at ChartHop, Ian White, considered whether there should be a location-based salary adjustment as some of his staff moved away from company headquarters in New York City. But ultimately, White said it was a “no-brainer” not to.

“It’s clearer and more consistent for everybody if people can trust that they’re paid the same for the same work, and then they can make choices accordingly,” he said.

White said if he had gone forward with a location-based pay cut, it would have put him in the “weird” situation of policing employees’ locations. Some companies, he added, have to measure whether people are living close enough to a metro region that the metro cost of living applies. “I didn’t want to deal with any of that,” he said.

Geographic-based salary cuts can also perpetuate inequity for women and people of color who already face pay gaps compared to their white male peers, said Nadia De Ala, a career coach. According to a Pew Research Center analysis, 1 in 4 working women said they have earned less a man doing the same job, while just 5% of working men said they’ve learned less than a woman doing their same job.

“More often than not, my clients get heartbroken because they find out, ‘Wow, compared to my counterparts’ ― typically white male counterparts ― ‘I am getting thousands of dollars less for the same work,’” De Ala said.

Those thousands of dollars add up. Black and Latina women are the most likely group to be single heads of household and the only breadwinner for their families. Women of color are also the group that is least likely to be able to cover an earnings loss such as a pay cut for moving or working remotely.

One of De Ala’s clients who was facing a salary reduction for moving heard through informational interviews that she was already being underpaid based on her original, existing location.

“I imagine for my client, it was very hard for her to trust, ‘Is this fair? Is everyone getting this?’” De Ala said.

When people work remotely, they can also shoulder a financial burden at the same time the decision helps a business’s bottom line. People working at home can incur costs like setting up and maintaining an office and paying for high-speed internet and electricity that their employer used to cover. Danelle Clark, a utility administrative professional, previously told HuffPost that choosing to stay remote during the pandemic resulted in a 10% pay cut that outweighed what she saves from forgoing her short commute.

“I personally don’t think you need to take a pay cut to work from home. I’m just as productive as I am in the office, if not more so,” Clarke said. “I did not get any extra equipment. I was provided a laptop and a monitor, but no sort of desk or workstation.”

Companies that do enact geographic salary adjustments may be weighing how much it affects employee morale and making a bet against the future of remote work, Zhao suggested.

“If five years from now, remote work is only 5% of the labor market, there might not be enough competition to drive local cost of labor up to the rates you would see in the Bay Area and New York City,” he said.

White thought similarly: “A lot of companies that are doing location-based pay or location-based pay cuts sort of figure they are going back to an office again. And they almost want to motivate employees to come back to the office.”

The advantage of not doing such pay cuts and calculations, he said, is that it sends a better message.

“We are going to trust people as adults to make decisions that make the most sense for themselves and their families,” he said.