By Lydia O'Connor via HuffPost 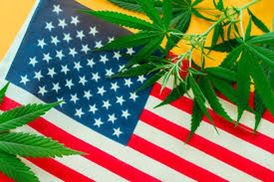 "I say that it is past time to end the federal cannabis prohibition," Senate Majority Leader Chuck Schumer said.

Senate Majority Leader Chuck Schumer and other Democrats in the chamber announced a long-awaited bill Thursday to lift the federal ban on cannabis products ― something that’s hugely popular with the American people but unlikely to succeed in Congress right now.

The New York senator’s Cannabis Administration and Opportunity Act has been in the works since last year, when he released a draft with Senate Finance Committee chair Ron Wyden (D-Ore.) and Sen. Cory Booker (D-N.J.). If passed, it would decriminalize weed on the federal level and officially allow states to create their own marijuana laws.

“As Senate Majority Leader, I say that it is past time to end the federal cannabis prohibition,” Schumer said in a statement. “And the bill we’re introducing today will update our cannabis laws and help reverse decades of harm inflicted by the War on Drugs, especially on communities of color.”

Even though the federal government bans the use, sale and possession of cannabis, 37 states, four U.S. territories and the District of Columbia have all legalized its medical use. Twenty-two of them have legalized the drug for recreational uses. There is no record of anyone ever dying of a marijuana overdose.

Those states’ laws exist in defiance of the 1970 federal ban, which categorizes weed as a Schedule I drug with a high potential for abuse ― alongside heroin, which claimed more than 13,000 lives in the U.S. in 2020. The federal government currently considers weed to be more dangerous than cocaine and methamphetamine, which combined were linked to more than 50,000 American deaths in 2021.

Cannabis producers and merchants in places where it’s legal have operated in a legal gray area for years, with the federal government mainly targeting weed businesses without licenses from their states.

Although 6 in 10 Americans support legalizing weed, with more than 70% of Democrats and about half of Republicans on board, conservative stances on the drug persist in Congress. Schumer will need all of the Senate Democrats and at least 10 Republicans to make the law a reality, but there’s strong resistance among some members of both parties.

That’s despite research that shows Black people in the U.S. are much more likely to be arrested than whites for marijuana possession, even though there are similar usage rates among both demographics.