Michigan drive-in theaters: 11 spots to catch a movie this summer

Those details relate to the atmosphere of the drive-in theater, an American casual entertainment format that found its heyday in the 1950s and 1960s.

At such a theater, visitors pull up vehicles in a parking lot, facing a huge outdoor movie screen, purchase concession snacks, set up a radio or a speaker device to listen to the audio, and enjoy a show (often a double feature) that starts after dusk.

According to the website of The Capri Drive-In Theater in Coldwater, there were 110 drive-ins in Michigan during 1958, considered the peak of the trend in this state.

There are now only nearly a dozen.

Here’s a roundup of where the traditional drive-ins can be found.

Hi-Way Drive-In Theater
2778 E. Sanilac Rd., Carsonville
It’s one of Michigan’s oldest operating outdoor movie venues, dating back to 1948. Sound is available through FM car radio. They’ve also participated in some drive-in livestream concert events.
Schedule: They plan to open in May for the 2022 season. The box office opens at 7:30 and the movies start at dusk; new movies start on Fridays. 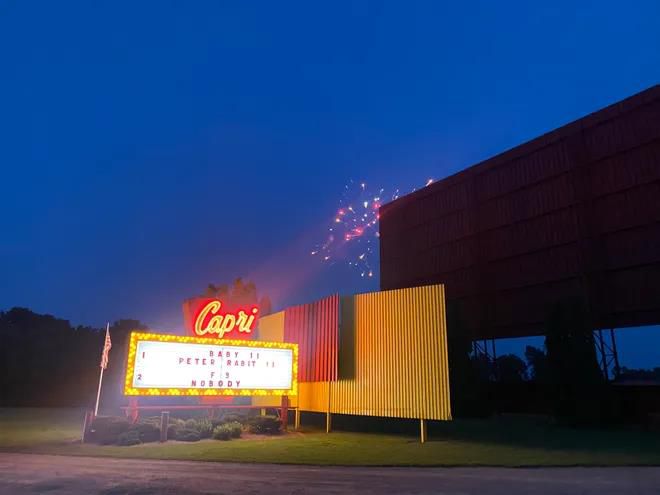 Capri Drive-In Theater
119 W. Chicago Road, Coldwater
Opened in 1964, with a second screen added in 1986, this is a two screen theater lot. Sound is available through AM and FM, or you can rent a portable radio on site. Was named “One of Ten Drive-Ins Worth a Detour” in 2001 by USA Today and The New York Times.
Schedule: The 2022 season has started. The box office opens at 8 p.m. with shows Friday through Sunday; movies start at sundown. 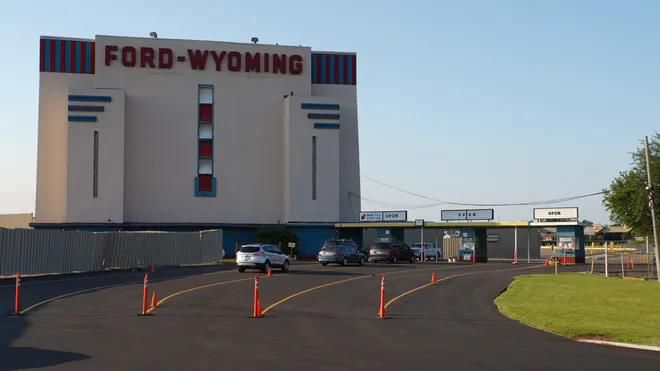 Ford-Wyoming Drive In Theatre
10400 Ford Road, Dearborn
Opened in spring 1950. Because the 70th anniversary happened during the start of the COVID-19 pandemic, the theater postponed the public celebration and rescheduled it for May 19, 2022.
Schedule: The seven-day season has started for 2022. Box office opens 7:45 p.m. Fridays and Saturdays; 8 p.m. Sundays-Thursdays. New movies and showtimes posted weekly. 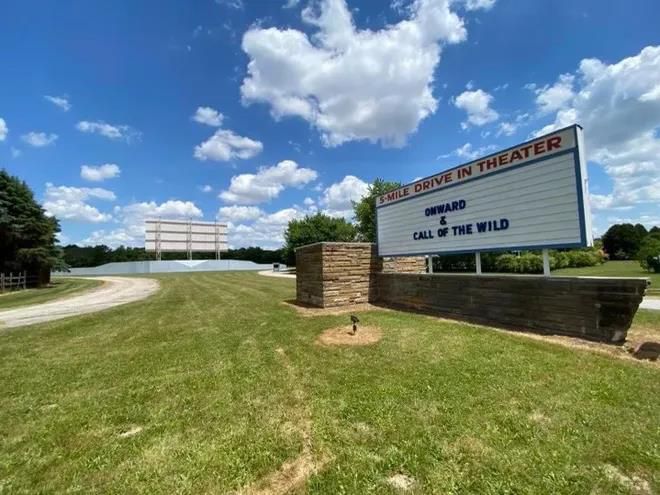 5 Mile Drive In
28190 M-152, Dowagiac
Built in 1961. Radios are available to loan out if your vehicle does not have FM. Playground on site. Private party rentals available.
Schedule: Plans to open for 2022 season on May 27. Shows on Friday and Saturday nights, gates open at 7 p.m., movie begins at dusk. Occasional midnight showings on Thursdays. 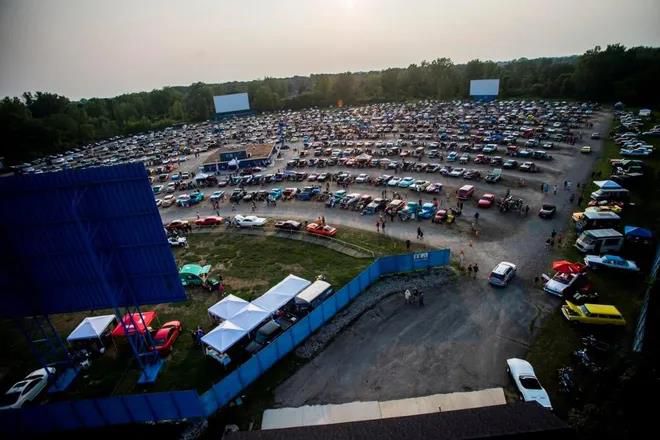 Sunset Drive In
69071 Red Arrow Highway, Hartford
Opened in 1948. Sound is via FM radio, loaners are available. According to the website, pets are also welcome.
Schedule: The 2022 season begins May 27, shows are Friday and Saturday nights. Gates open at 7 p.m. with first movie at dusk. Occasional midnight showings on Thursdays.

Cherry Bowl Drive-In Theater
9812 Honor Highway, Honor
Opened in 1953, with a playground and mini golf on site. According to the website, other events include pony rides, clowns, classic car cruises and more. Sound available via FM radio or speakers mounted on posts.
Schedule: Plans to open for 2022 season, date to be announced. Ran Fridays, Saturdays and Sundays during 2021. Showings begin at dusk. 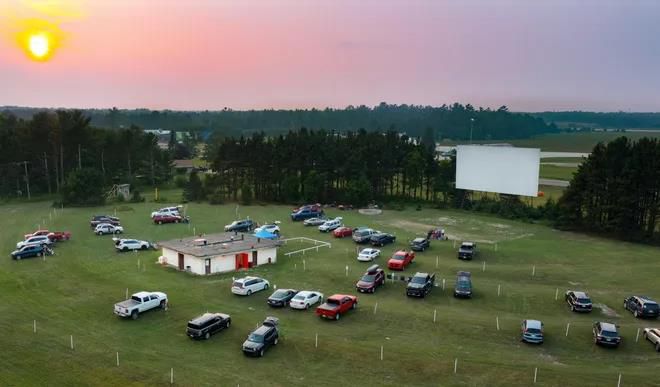 An aerial view of the Highway Community 2 Drive In Theater screen and field in Manistique. Courtesy Of U.P. Film Union, Manistique.

Highway 2 Community Drive In Theater
5885 W. US Highway 2, Manistique
The only drive-in theater currently operating in Michigan’s Upper Peninsula. Opened in 1953, closed in 2001; then, the founding members of the Upper Peninsula Film Union started to host movie nights in 2016. The Film Union acquired the property in 2018. Admission is free, donations welcomed, nonprofit groups host the concession stand.
Schedule: Four movie nights have been announced for the 2022 season, starting June 25. 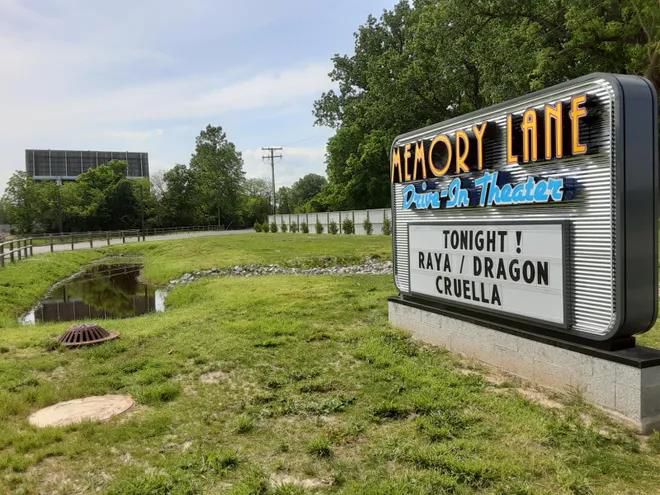 Memory Lane Drive-In Theater
6501 N. Monroe St., Monroe
The theater opened in 2021 after several years of planning. It is on the site of the former Denniston Drive-In that closed in 1985. Movie sound is by FM radio. Playground on site.
Schedule: The 2022 season began May 6. Box office opens at 8 p.m. 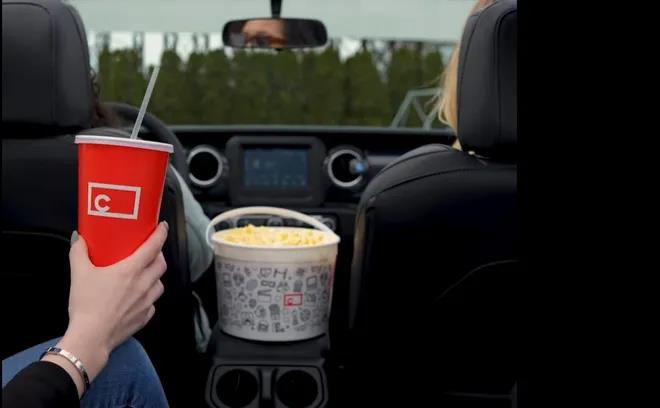 Drive-in visitors are shown with concession snacks in their vehicle in this image from a promotional video for Getty Drive-In in Muskegon.

Getty Drive-In
920 E. Summit Ave., Muskegon
This drive-in has four screens with radio sound with a playground on site. It's part of the Celebration Cinema theater group.
Schedule: The 2022 season has started. Gates open at 8 p.m. New schedule usually starts on Friday.

Summer Drive-In at USA Hockey Arena
14900 Beck Road, Plymouth
The drive-in shows take place in the USA Hockey Arena parking lot. Radio sound.
Schedule: The “Sneak Peak Weekends” for the 2022 season are May 20-21 and May 27-29.