Meet the people paving the way for minorities in Detroit construction 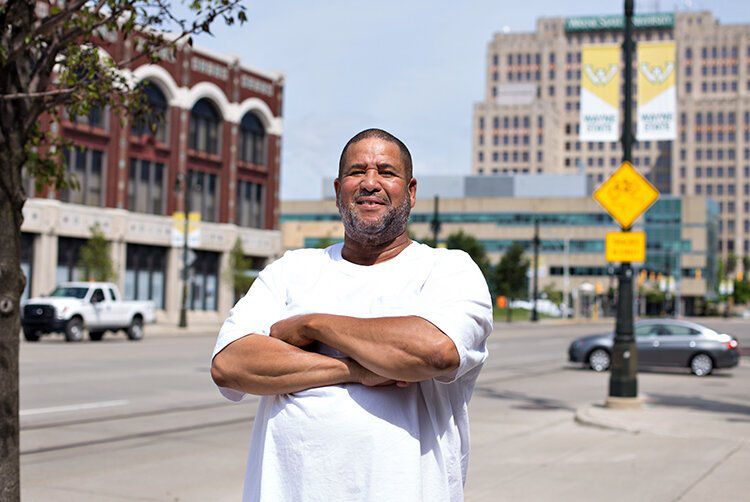 Clifford Terry has seen his share of ups and downs in the Detroit construction industry.

Clifford Terry grew up in New Jersey helping his neighborhood carpenter on weekends, before launching his own construction company in 1989. He registered his company, now Terry Group Contracting, in Detroit in 2018 and has “slowly, but surely” built his business. It hasn’t been a smooth path.

“You hear a lot of rhetoric about wanting minority participation,” Terry says. “But there’s so many hurdles in place that it’s still next to impossible.”

Terry is one of 25 million minority workers in the U.S. construction industry and according to Jason Cole, executive director of the Detroit-based Michigan Minority Contractors Association (MMCA), Terry is just what the city’s landscape needs.

“The future in Detroit shouldn't just be Dan Gilbert,” Cole says. “It should be Cliff Terry and people who built up a neighborhood, and with the neighborhood included.” 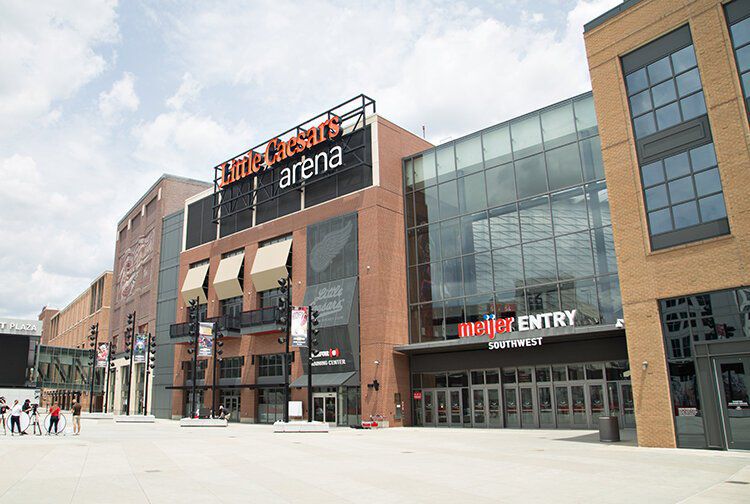 Hiring hurdles
More than 11 million people work in the construction industry across the country, but according to the U.S. Bureau of Labor Statistics only 6.4% of employees are Black or African American, and only 10.3% identify as women.

In Detroit, an executive order mandates that contractors and subcontractors on city-funded projects employ a workforce that’s at least 51% city residents, a policy that should have helped tip the scales. However, Terry points to the Little Caesars Arena controversy in 2018 (where contractors working on the arena were fined over $5 million for failing to meet the labor requirement) as an example of policy not achieving the intended changes in his industry.

Terry believes it’s the strict requirements in the employment process that disadvantage applicants, and lead to situations like the Little Caesars Arena case, such as requiring construction workers to have a driver's license.

“So what if a guy doesn’t have a driver's license?” he says. “As long as he gets to work on time it’s up to him how he gets there, lots of people catch a bus.”

Another regulation he sees as a hurdle is a stringent no-conviction policy. As a former employee for the Michigan Department of Corrections, Terry believes minor convictions shouldn’t stop someone from gaining work.

“Even the Department of Corrections hires former felons to do work,” he points out. “If applicants can get minor convictions expunged, it will make a difference.”

Expunging convictions
The numbers suggest that Terry is correct, an expungement does indeed make a difference, and not just to individual employees. The barriers that people with convictions face when applying for work cost the country $78 to $87 billion in annual GDP because of reduced employment rates, according to a 2016 report. The same study also found that with a conviction, Black men saw a 4.7 to 5.4% reduction in their employment rate, while for white men it was 1.1 to 1.3%.

However, researchers at the University of Michigan Law School found that, with a conviction expunged, job applicants see a 25% increase in income within the two years.

In Michigan, a job applicant can currently get a conviction expunged after five years but the legal process is often difficult to navigate, says John Cooper, executive director of Safe & Just Michigan (SJM). In Wayne County alone there are 152,000 people who are eligible to expunge their convictions in the current system, yet only 6.5% of those eligible for expungement successfully complete Michigan’s application process within five years of eligibility.

“The existing process doesn’t even really begin to serve the number of people who need it,” says Cooper. “It’s a major problem.”

Advocacy groups like SJM have been pushing for an automatic expungement system for low-level convictions, modeled off a concept initially adopted in Pennsylvania and now moving through several other states. With a bill package now on the Senate floor, Cooper and his team are cautiously optimistic the new legislation could be implemented over the next two years.

“It’s going to take time to build and test the automatic system,” Cooper explains. “But I would expect to see significant impact in the construction industry.”

Beyond the obvious disparities
Disadvantages for minority business enterprises (MBEs) don’t always stem from clear cases of discrimination. A 2016 study by the Minority Business Development Agency (MBDA) found that barriers to equality in the industry were from — as observers might expect — discriminatory behavior, such as prime contractors and agencies holding to stereotypes, having double standards, and manipulating bid processes based on prejudicial factors unrelated to business performance. But the study also found that a key barrier for MBEs can come from a lack of network access.

Exclusion of MBEs from formal or informal networks that would encourage greater access to public contracting opportunities is hurting minority contractors, according to the study, which states that there is a “fine line between claims of discrimination and a general lack of access.” This is where Cole’s work at MMCA comes in.

“It’s about getting in the right rooms and being at the right tables,” says Cole. “Folks don’t think of you when they are crafting their invites.” 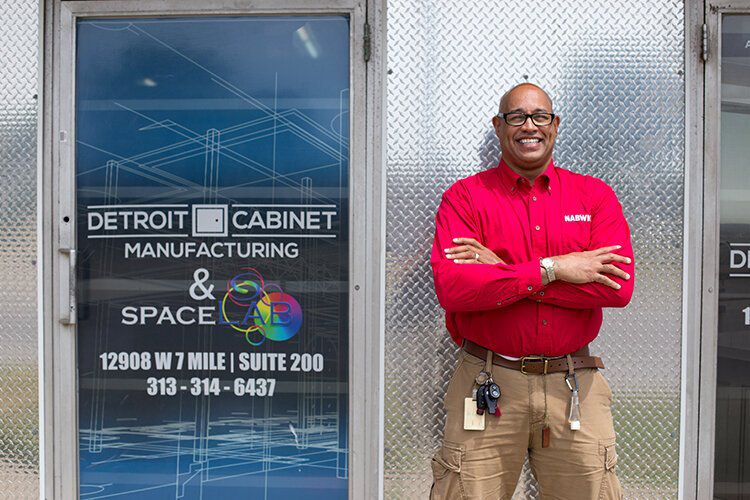 Jason Cole is part of nine associations working to support minority groups in the construction industry in Detroit.

Connecting the dots
Cole is part of no fewer than nine other associations advocating for minority groups in his industry, including the National Association of Black Women in Construction (NABWIC) and the Michigan Hispanic Contractors Association. He sees himself as a “cog in the wheel” when it comes to connecting people.

“It’s not that I am lonely and need more friends,” he says. “I just saw a need, and I have the skills to help put people together.”

For Terry, joining the MMCA and meeting Cole has helped him meet subcontractors he trusts and to identify financial resources.

“Plumbing, electrical, HVAC—it’s nice to have people that I can call on,” he says.

Some of the most important work Cole does is working on loan applications, and he helps MMCA members secure funding, bonding, and insurance. He says initiatives like the Entrepreneurs of Color Fund (a $100 million program launched in Detroit in 2015 by JPMorgan Chase with W.K. Kellogg Foundation and Detroit Development Fund) make a difference.

“There’s a bias,” Terry admits, when it comes to applying for loans. “Being a small contractor and being a small minority contractor, well we all suffer the same issues, but there’s some people who are, shall we say, ‘more willing’ to help than others.”

“[Cole] was extremely helpful, he would steer me to certain financial specialists.”

Access to capital has been the biggest hurdle for Faarook Sims-Bey, president of Artisan Renovations Capstone, as well. Sims-Bey has been a member of MMCA for three years and says the network has helped him through the “tough spots.”

“Most jobs want you to finance materials up front,” he says. “So having access to lending is key.” 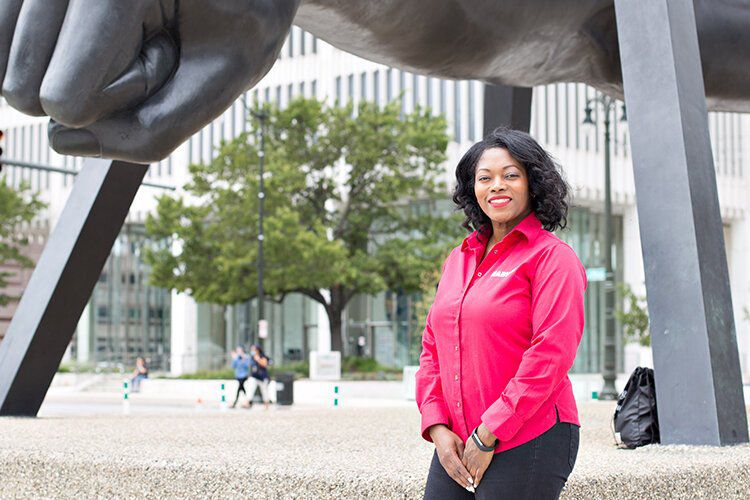 Tylene Henry represents the Detroit chapter of the National Association of Black Women in Construction.

Women of color in construction
Tylene Henry, president of the Detroit chapter of NABWIC, says the networking component of their work advocating for women of color in the industry is crucial.

By 2018 women of color accounted for nearly half of all women-owned businesses in the U.S. and one area that has seen significant growth is in construction. Between 2007 and 2018 women-owned construction firms measured a 94% increase across the country.

On average though, the gap is widening between the revenue for businesses owned by women of color and those owned by non-minority women. It’s something the leaders of NABWIC want to change.

The nonprofit’s Detroit chapter supports 40 members to share contract opportunities and run networking programs, like the recent Hard Hats & Heels event, and they strive to keep a finger on the pulse of youth, returning citizens, and agencies that run training programs.

“Ultimately, socioeconomic disparities make for an uneven playing field,” says Henry. “Regardless of whether you are seeking employment, or contract opportunities.”

Despite cities championing minority programs, Henry is disappointed with continuing disparity when it comes to Black businesses securing contract opportunities.

“This stems from a history of systemic racial inequality and oppression,” she says.

Henry agrees that “procurement readiness” is one of the biggest challenges in the industry, and NABWIC helps members with logistics like preparing a capabilities statement and working on bonding capacity. She says establishing strategic partnerships with procurement agencies, and trust with elected officials, has helped.

“We understand the importance of community engagement.”

Focusing on the future
Cole admits the COVID-19 pandemic has made a dent in the MMCA. Membership is down by 50% and he worries about the outcome of the federal election, specifically in relation to the proposed $1.5 trillion national infrastructure bill. At a local level though, Cole believes the biggest focus should be on adult education programs and focusing on what works.

“We need to get smarter as a population,” he says. “Looking at what’s been happening in the last three weeks, it’s deja vu.”

“You remember the slights, but you forget the good stuff that happens. I have countless good stories.”

For Henry, she hopes hard evidence will help highlight the issues for minority businesses in the industry, and how to better address them.

“I hope that we will have a disparity study completed, encompassing the state, county, and city levels,” she says. “This way there will be undeniable evidence of the lack of equitable access to contract opportunities for Black businesses.”

Sims-Bey believes minority contractors have a huge part to play in the city’s future, but they need to be included on more than surface-level participation.

“Detroit is on the rise and rebuilding,” he says. “We want to have a hand in that rebuilding.”

This is part of a series supported by LISC Detroit that chronicles Detroit small businesses’ journey in response to the COVID-19 pandemic.