By Roz A. Gee via Blackenterprise.com 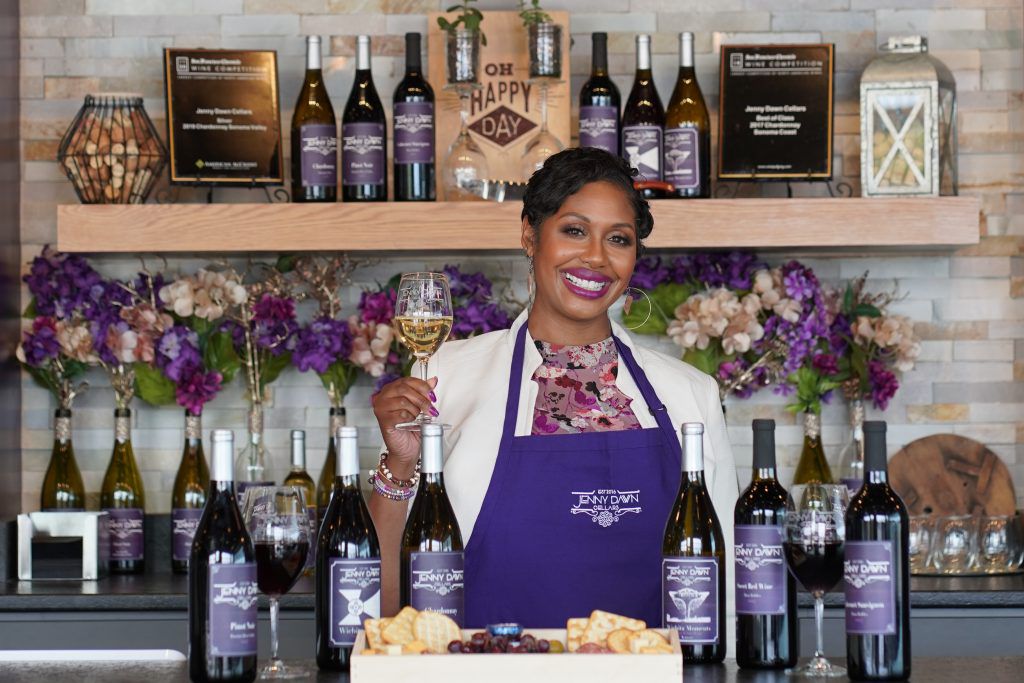 Amid all that is transpiring around the world, and beyond the borders of our own backyards, it is always refreshing to capture milestones of cultural progression.

Jenny Dawn Cellars was founded by Jennifer McDonald and her family in 2016. Within a few short years, it has increasingly grown from an incubated concept into Wichita’s first urban winery startup. Last November, the doors were officially opened in the south end of Union Station where it boasts a tasting room, event venue, and on-site wine production.

After conducting consumer market research during graduate school at Kansas State University, McDonald discovered that there was a demand for consumers to access fine wine within a winery setting in the urban core of Wichita. Traditionally, wineries were in rural areas not easily accessible to city-dwelling consumers. She wanted to make and sell wine in close proximity to this under-served market and chose the recently restored Union Station in downtown Wichita.

As the first black winemaker and winery owner in Kansas, it was not an ease-on-down the yellow brick road stroll. McDonald received major pushback with her business model through regulation and licensing.

“It was challenging to finance my business. I always felt like an underdog when it came to negotiating contracts even though I had a business attorney.”

Adding more frustration to the process, the construction of the winery took twice as long and cost twice as much as originally anticipated. There were times when it felt like everything that could go wrong—did. However, Jennifer clung to her mantra “Have faith and never give up” and so she remained laser-focused on her “why” with relentless pursuit of purpose and ardent zeal.

Given the current racial climate, McDonald says the winery has not experienced any racial resistance from customers at its premiere location, though it has experienced the effects of institutional and systemic racism while building and growing the business.

“A lot of people did not initially believe in my vision or my abilities to start and run my business,” she says. Being a Black business owner is hard and she often questioned whether it should be this hard in 2020. “Through performance, I have been able to turn naysayers into supporters.”

She openly talks about the fact that she had to go to nine banks before a bank was willing to finance the business. Recently, it was not granted funding during round one of the PPP loan process. “I personally know a lot of Black entrepreneurs that shared this experience,” McDonald says. “We were approved for funds in round two when funding was earmarked for minority businesses.”

A strong piece of advice pulled from the entrepreneurial journey of Jenny Dawn Cellars is to never go alone. Her business support system comprises five savvy investors, plus a mixed cluster of peer mentors and business and wine-making mentors. She feels 100% supported. If she ever runs into any problems or issues that she is unsure how to tackle, knowing that there is an accessible community of supporters to lean on, glean from, and seek guidance from is the perfect concoction needed at the end of the day.

Breaking into the winery space is no small feat. The vision included expanding the brand nationally by offering Jenny Dawn Cellars wine online now servicing 38 states, with the intention to put Kansas back on the map as a grape-growing and wine-making state. The online service proved to be a power move—especially with the economic threat of COVID-19.

For many years, Kansas wines have been discounted by wine connoisseurs, despite a long and storied history of wine-making in the state. Hopefully, the brand will prove that the Kansas grape and fruit wine can hold its own against wines produced in premier growing regions. McDonald, as well as many Kansans, enjoy California wines, so she integrated the region when formulating her business strategy. Jenny Dawn Cellars crafts premium wines that highlight grapes and fruit from California and Kansas—showcasing them side-by-side in an experience that is unique to the brand.

McDonald was deeply inspired by the economic significance that train stations held in the early 1900s, especially Union Stations that can be found across the country and the place that they hold in our collective memory, reminiscent of when rail travel connected the country and travel was a more leisurely affair. Unfortunately, many of these elegant, powerful structures have fallen into disrepair. Some have been rebuilt and restored to their former glory—a respectful nod to the testament of resilience. In parallel, Jenny Dawn Cellars wines are built on the solid, historic foundation of Kansas wine-making, paying homage to the Wichita roots:

- Union Station Chardonnay–elegant and timeless as the architecture of its inspiration.
- Black Locomotive Crimson Cabernet–powerful and bold as the conductor of the train must always be.
- Red Caboose Dry Rosé–playful and lingering, capturing the last glimpse of a loved one waving as the train disappears into the horizon.

“At Jenny Dawn Cellars, we believe that great wine is a powerful storyteller and we aim to tell a unique story with every wine we craft—and plan to tell many more for years to come!”