In 1933, when banks closed, Detroit printed its own money 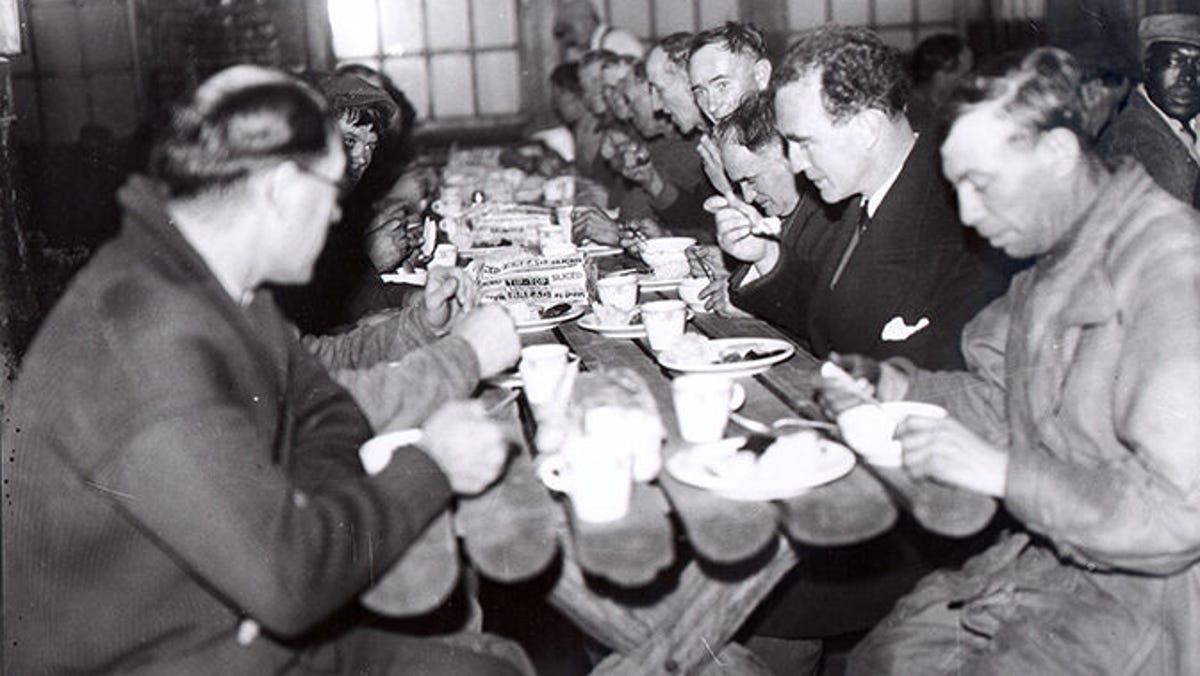 Detroit Mayor Frank Murphy, second on right, dines with unemployed men at a soup kitchen in 1932 during the Depression.
PROVIDED BY BENTLEY HISTORICAL LIBRARY

In one, a gaunt man holds a hand-lettered placard that reads, “WORK IS WHAT I WANT — NOT CHARITY. WHO WILL HELP ME GET A JOB?”

The stock market crash of 1929 hit the nation like a sucker punch. Shocked by the unexpected calamity, both ordinary wage earners and businesspeople braced themselves for the worst. The following years proved so draconian that by 1933 Detroit’s city government was forced to meet its payroll with scrip — a substitute for real money.

Leading the city during one of its darkest hours was an empathetic guide, Mayor Frank Murphy, the former Recorder’s Court judge who would go on to serve as Michigan governor, U.S. attorney general and a U.S. Supreme Court justice.

During his tenure Murphy saw his role as similar to that of President Franklin Delano Roosevelt. Intimately attuned to the plight of the unemployed, Murphy established the Mayor’s Unemployment Committee that set up soup kitchens and vegetable gardens to serve needy people. Murphy even dined with jobless men at free-food sites.

Detroit also had a Welfare Department, one of the few such municipal agencies in the nation. In 1932 the department assisted homeless families by placing them in vacant homes owned by the city. The support was urgently needed. According to the Free Press, by the summer of 1932 landlords threatened some 100 tenants per day with eviction.

Massive layoffs at each of the Detroit automakers made the city's situation especially acute. Eighty percent of Detroit’s manufacturing capacity stood idle. By 1933, Michigan’s jobless rate stood at 34%, while Detroit’s rate of tax delinquencies was the highest in the nation.

Amid the financial carnage, Roosevelt took Michigan in a landslide in 1932, making FDR the first Democrat to carry the state since Franklin Pierce in 1852. Determined to respond with bold action, the new president also saw his role as counselor to the nation.

“When you get to the end of your rope, tie a knot and hang on,” Roosevelt told Americans.

More: How Detroit led the way in 1933 bank collapse
More: Once-swanky Detroit building is scene of mysterious crime that was never solved

A run for the money
As the Depression wore on, Detroiters in early 1933 began to withdraw from their accounts to tide themselves over. The First National Bank of Detroit was forced to honor some $250 million in withdrawals. Collectively as much as $3 million weekly was flowing from the city’s financial institutions, which also included the Guardian National Bank of Commerce and the Union Guardian Trust Company. If these institutions were to fail, experts believed the remaining banks in Michigan — and eventually the nation — would soon follow. 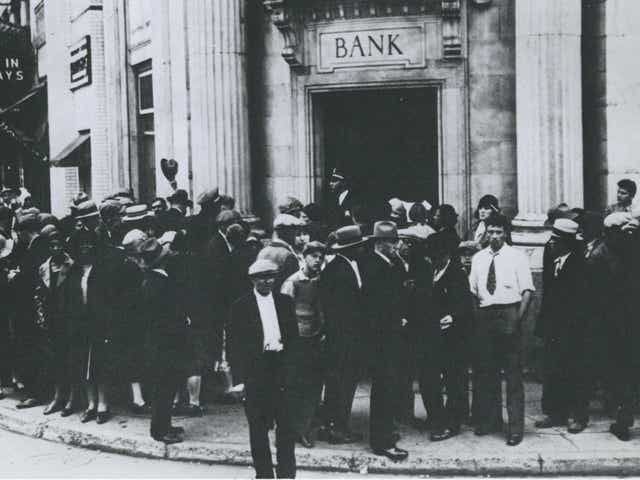 On Valentine's Day in 1933, Michigan Gov. William Comstock issued a proclamation closing all banks. He signed it at 1:32 A.M. that day, and the next morning people gathered at their banks, stunned by the news. Business was paralyzed and the crisis hit bottom when President Franklin D. Roosevelt closed all banks in the country on March 6. WSU

As an emergency measure, Michigan Gov. William Comstock declared a state bank holiday at 1 a.m. Feb. 14. Intended at first to last only eight days, it was extended to March 6. On that date the newly inaugurated Roosevelt, alarmed at panic withdrawals nationwide, imposed a national bank holiday,which remained in effect until March 13. These measures put a pause on all banking activity, avoiding potentially disastrous bank runs until a permanent solution could be found.

While the bank holidays allowed the institutions to avert insolvency, they left a huge problem — how were people supposed to survive without access to their cash? The solution was one of last resort: scrip — also known as promissory notes — that would circulate as an alternate medium of exchange.

On Feb. 25, even before Michigan’s holiday was declared, the Detroit Clearing House Association announced its intention to begin issuing scrip to its member banks. Counterparts in other cities soon followed.

On March 5, City of Detroit Controller Charles Richter revealed a city scrip program to pay municipal employees. While born out of emergency, the effectiveness of the program stands out as a civic success story, albeit a stopgap one. 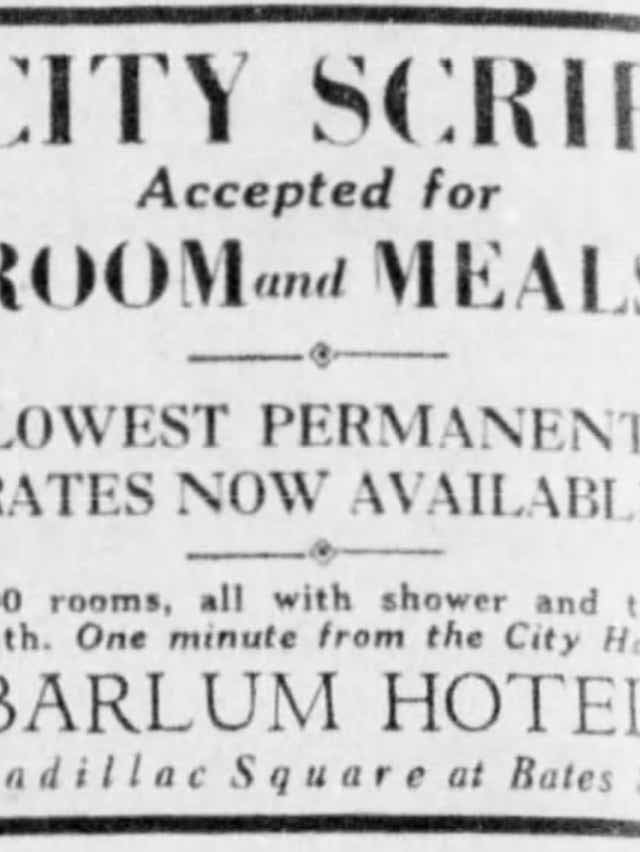 An ad that ran in the Free Press in 1933 for the Barlum Hotel.
PROVIDED BY BARLUM HOTEL.

The program paid all municipal salaries, including those of police and firefighters, in scrip, in place of cash. City merchants willing to accept the alternate currency could redeem it as payment against outstanding city tax debts.

The city even allowed tenants whose landlords’ taxes were in arrears to present their scrip at the City Treasurer’s Office. A receipt would be issued that satisfied the person’s rent obligation, with the funds being credit toward the owner’s tax debt. The scrip document’s fine print states that it was technically a municipal bond, thus avoiding the legal prohibition against a local government issuing its own currency.

At first, the business community embraced the program wholeheartedly. Period ads in the Free Press from businesses as varied as boarding houses to the J.L. Hudson Co. promote their willingness to accept the scrip. 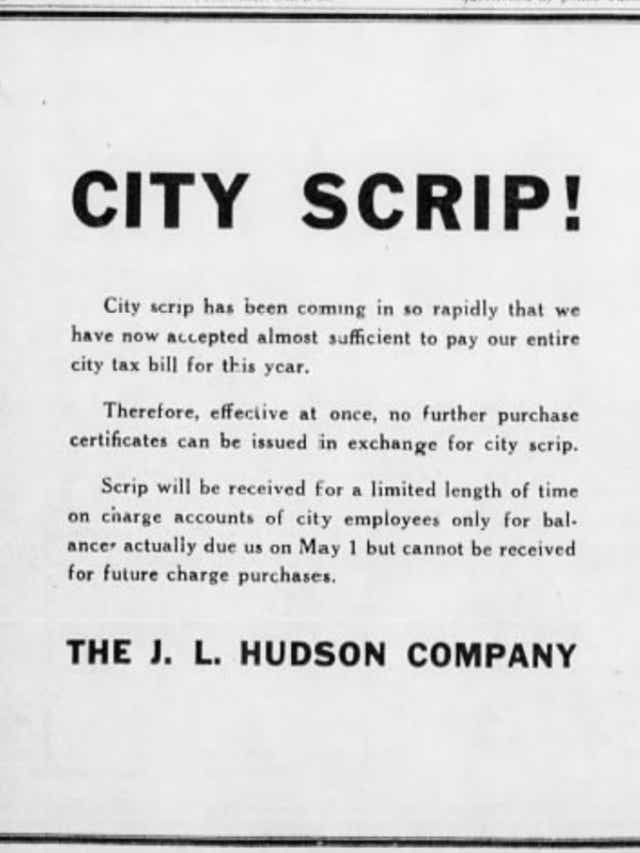 Hudson’s ran thousands of ads in Detroit newspapers over the decades. This notice, from 1933, is one of the most unusual.
PROVIDED BY THE J.L. HUDSON COMPANY

“City Scrip Accepted for Room and Meals—Barlum Hotel, Cadillac Square at Bates St,” reads an ad from May 1933.

Publix Theaters, a national operator of movie houses, advertised its acceptance of city scrip at its three Detroit venues, the Fisher, the Riviera and the Michigan.

But after a short time, several downtown businesses collected far more of the ersatz cash than they anticipated.

“City scrip has been coming in so rapidly that we that we now have accepted almost sufficient to pay our entire city tax bill for this year,” Hudson General Manager Oscar Webber said.

Times were different
Fortunately, the situation was only temporary.

By the first half of 1934 the city’s fortunes had improved, as tax receipts had more than doubled from 1933. After July, the city terminated the issuance of new scrip but would continue to credit scrip still in circulation against outstanding tax bills. If the presenter had no tax debt, the notes could be redeemed for cash.

Although it worked during the Depression years as a response to the banking crisis, a hypothetical scrip program during a financial calamity in the 21st century would not be feasible. Wayne State University law professor John Mogk explained such a move would be devastating for the city’s bond and credit ratings. Also, factors contributing to the city’s cash position are very different than in 1933. 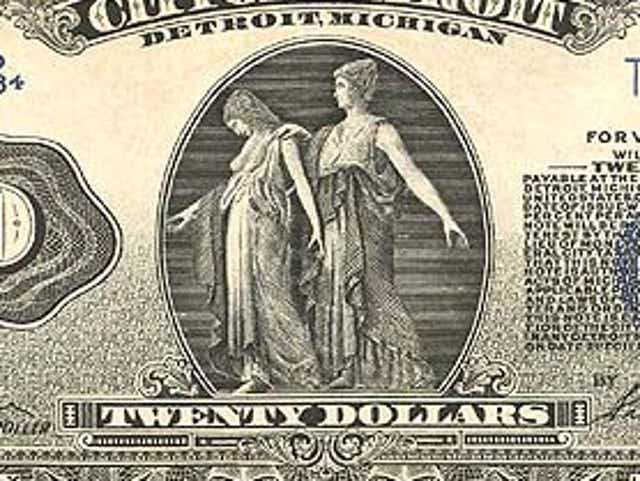 Detroit designed its scrip to make it carry the same visual feel as real money.
WWW.DEPRESSIONSCRIP.COM

“Today, the city benefits from a diverse array of funding sources, including the municipal income tax, utility tax, and state revenue sharing — none of which existed in 1933,” Mogk said.

To gain the confidence of the public, city of Detroit scrip notes were engraved documents of high quality and mimicked the appearance of real cash. Notes were issued in denominations of $1 to $1,000.

Today, surviving specimens can be found in antique shops and on various collectors’ websites. A $1 note in good condition can go for as much as $50. Not a bad interest rate!

Just don’t try to use one to pay your light bill.