“I did not sign up for the military. I signed up for Walmart.” What grocery store workers say they’re facing during the pandemic

By Anna North via Vox 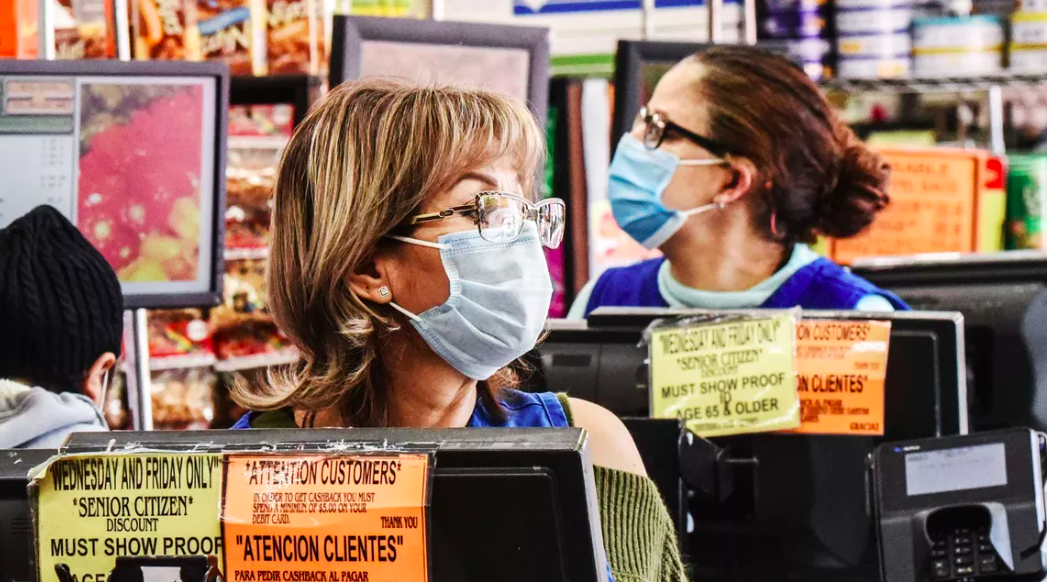 What grocery store workers say they’re facing during the pandemic.

A few weeks ago, Evelyn Hall asked her manager at Walmart why the store wasn’t giving workers gloves and masks.

The manager’s response, according to Hall: “Wash your hands every 15 minutes, so you don’t need a glove or a mask.”

“She just walked away from me and started laughing, like it was funny,” Hall said.

The lack of protective equipment wasn’t the only reason Hall, a Walmart employee for 28 years, felt unsafe at her Maryland store. The store also wasn’t counting customers to maintain social distancing and prevent crowding, she said. And she’d heard from other employees that workers at her store had contracted Covid-19 — but management had never informed other employees or closed the store.

Hall is 68 years old with diabetes and high blood pressure, conditions that put her at high risk of severe illness from the coronavirus. With so few protections in place, she felt Walmart was putting her life on the line.

“I did not sign up for the military,” she says she told her manager. “I signed up for Walmart.”

She is far from alone. Grocery workers around the country say that despite their position on the front lines of the pandemic, stores have been slow to implement policies that would keep them safe. And the toll of the virus on the people who help feed America has already been devastating: As of April 18, at least 18 Walmart employees had died, and 10 percent of the company’s workforce was on leave, according to the Wall Street Journal. Workers have died at Trader Joe’s, Safeway, and Kroger stores around the country as well.

Stores have made some changes in recent weeks, with Walmart announcing it would require (and provide) masks for employees beginning April 20. The company also says it is limiting the number of customers in stores and has processes to inform employees if their coworkers test positive.

But according to some employees at grocery store chains around the country, policies handed down from the top aren’t necessarily being put into place in actual stores. And some say that without tighter enforcement at the federal and state level, companies have no incentive to put the safety of their employees over their profit margins.

“It really shouldn’t be left to large nonunion corporations to decide unilaterally what is the appropriate level of safety precautions to take for their workers,” John Logan, a professor of labor and employment studies at San Francisco State University, told Vox.

Grocery store employees have become more crucial than ever during the pandemic, as restaurants close and many Americans shelter at home. Grocery store sales were up 83 percent for the two weeks ending March 22, MarketWatch reports, and though some of that may have been initial panic-buying, Americans are likely to keep buying more groceries than usual as they continue cooking at home. And they can’t do that without the people who stock the shelves and work the cash registers. Like the doctors and nurses who care for the sick, these are essential workers without whom the rest of America could not function.

But grocery workers are now at high risk, spending their shifts largely indoors in settings where it can be difficult to maintain the CDC-recommended 6 feet of distance between people. And some say their employers aren’t doing what’s necessary to protect them. 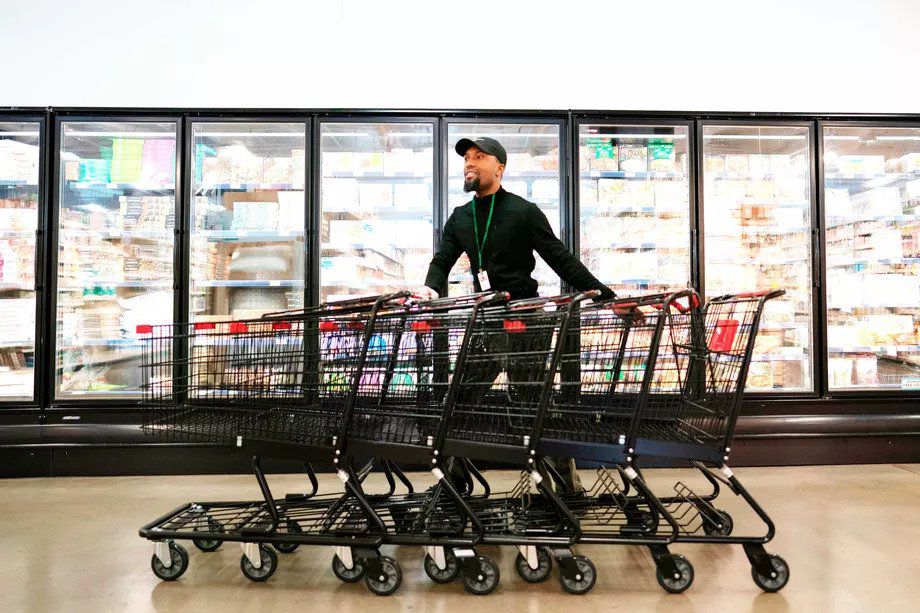 “I have not been provided with anything by the store itself in terms of PPE,” Mary Mueller-Reiche, a cashier at a Ralph’s grocery store in Los Angeles, told Vox. Coworkers and, once, even a customer have shared gloves with her, and she’s worn homemade masks, she said.

That’s not the only problem. As the coronavirus began to spread more rapidly in mid-March, the store instituted crowd-control measures. But at the end of the month, it suddenly went back to business as usual, Mueller-Reiche said.

“Nobody was standing 6 feet apart; there were way too many people in the store,” she said. “It got really, really scary.”

The stress of working under such conditions sent Mueller-Reiche into a panic attack that left her physically unable to work, she said. She’s been off work since then on the advice of a doctor.

Kroger, the parent company of Ralph’s, has not responded to Vox’s request for comment. The company announced earlier this month that it would limit occupancy at stores nationwide to 50 percent of normal capacity according to building codes. But Mueller-Reiche says that at her store, the occupancy limits weren’t shared with shoppers or employees. And “when we spoke out about safety concerns,” she said, “we were met with disbelief.”

Crowding is an issue at Walmart, too, workers say. On one recent Sunday, “that store was so packed,” with “no 6 feet distance or anything,” Hall said. Managers weren’t counting customers to make sure limits were enforced, she said.

“It really has become profit over lives,” Cyndi Murray, an associate at the same store, told Vox.

No one is forcing companies to prioritize worker safety

What Hall and Murray experienced is a nationwide pattern, Walmart workers say. “Across the country, management is still failing to enforce strict limits on the number of customers allowed in a store and failing to provide us with basic protective equipment,” a group of employees wrote in a letter sent to the company’s board on April 16. Meanwhile, “in many stores, management has failed to tell us when one of our coworkers gets diagnosed with Covid-19 so that we can get tested ourselves or self-quarantine in order to protect ourselves, our families, and our customers.”

It’s not just Walmart, either. As of April 1, employees at Office Depot, Walgreens, and Target were being discouraged from wearing masks, sometimes because of concerns that customers might find them “unsettling,” according to the New York Times. In March, a coalition representing Trader Joe’s workers said the employees were not being allowed to wear gloves. In early April, employees at MOM’s Organic Market in Philadelphia, Pennsylvania, staged a protest demanding that the store limit customers and take other steps to keep them safe. 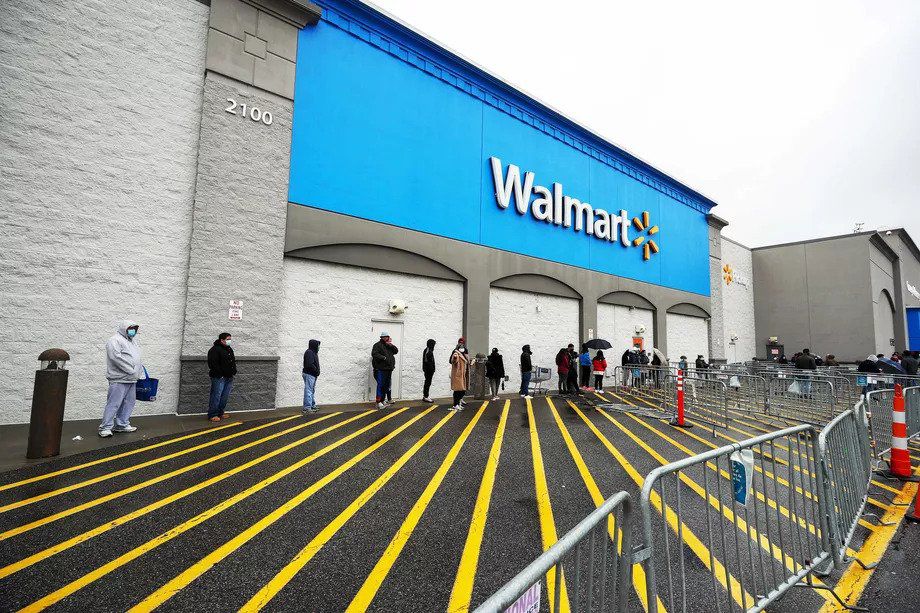 As the virus has spread and workers have begun speaking out, grocery companies have been taking some steps to protect employees. Walmart announced on April 3 that, beginning the following day, it would limit store occupancy to five customers per 1,000 feet, or about 20 percent of normal. When a Walmart employee tests positive for Covid, “we have processes in place to inform associates within the impacted store,” Rebecca Thomason, senior manager of corporate communications at the company, told Vox.

Meanwhile, Kroger CEO Rodney McMullen said on April 22 that the chain would begin requiring workers at all its stores to wear masks. Kroger and Albertson’s have also joined with the United Food and Commercial Workers International Union to call on officials to designate grocery workers as emergency personnel, which could get them better access to Covid-19 testing and protective gear, according to NPR.

But corporate policies aren’t necessarily trickling down to stores. “It’s one thing having a policy, it’s another making sure that it’s actually being strictly adhered to and properly enforced in individual stores,” Logan said. And grocery workers around the country are saying that when it comes to the number of customers, for example, “the limits are often not being enforced.”

The Occupational Safety and Health Administration (OSHA) issued guidance in March on preparing workplaces for Covid-19. But it is nonbinding, and while thousands of workers have filed complaints, it’s not clear that anything will be done about them.

Some parts of the country are responding to the problem more quickly than the federal government. On April 15, for example, California’s Division of Occupational Safety and Health issued new guidance for grocery stores, including limiting the number of customers and providing masks if the proper distance cannot be maintained. Those guidelines can be a model for the rest of the country, Logan said, but they have to be enforced. “These things have very limited value without having a proper system of enforcement,” he said.

For Hall, in Maryland, going to work no longer feels safe. She went on leave after feeling ill on April 7, and she isn’t sure when she’ll go back. In addition to herself, she’s worried about bringing the virus home to her daughter, who lives with her.

“We’ve got our lives on the line trying to take care of their customers, when we could be home with our families,” she said.