In defense of the much-maligned conversational form.

By Rebecca Jennings via Vox 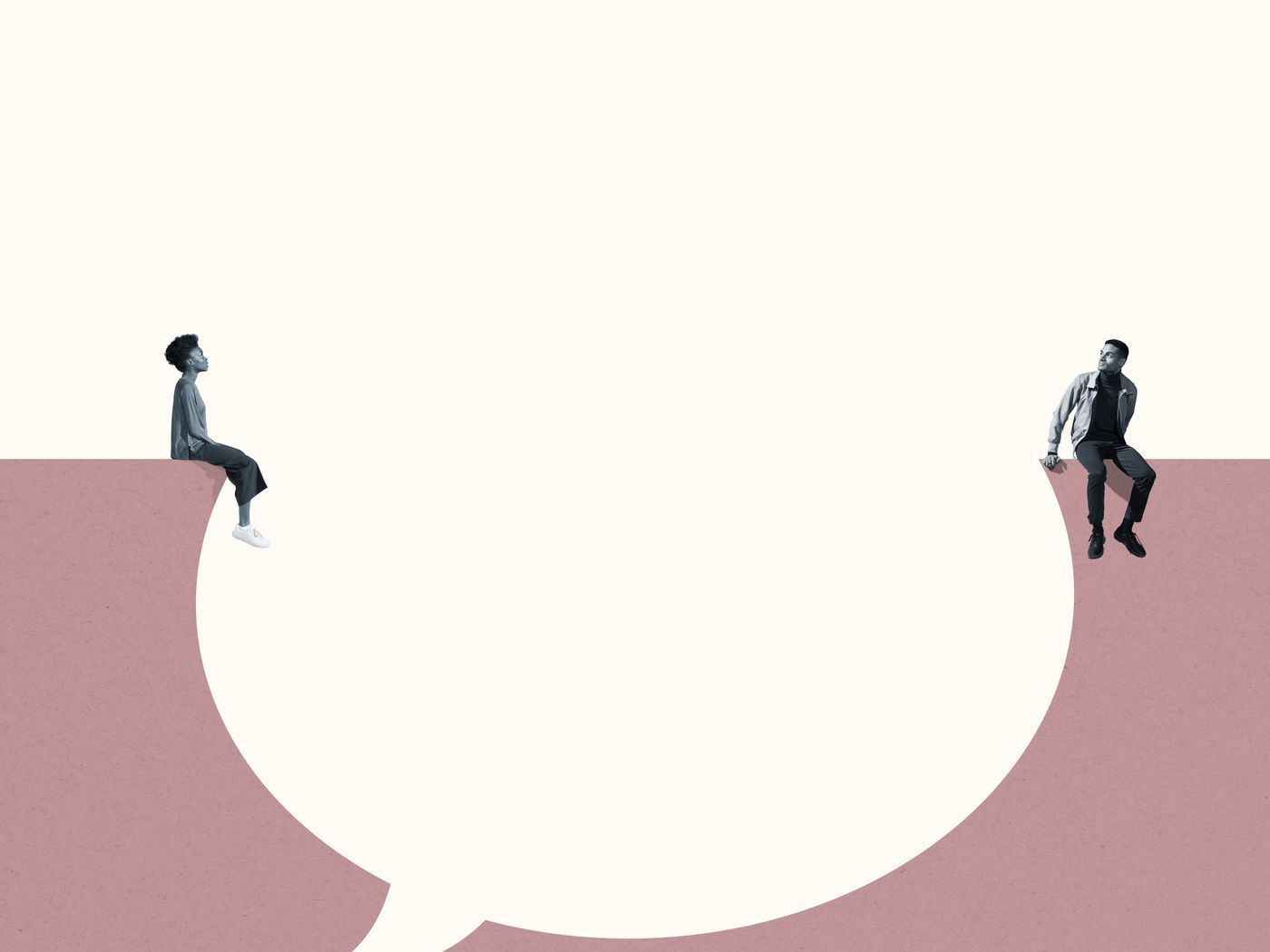 Part of the Friendship Issue of The Highlight, our home for ambitious stories that explain our world.

Remarking on the temperature is often cited as an example of boring conversation, but quite possibly the least awful effect of climate change is the fact that talking about the weather is now extremely interesting. In fact, often the weather is all I want to talk about, because aside from being a sinister reminder of the terror humans have wreaked on our home, it is, on rare occasions, also mysterious and wonderful. But it hardly matters what the weather is, just like it hardly matters what you watched on TV last night or what you did last weekend, because that isn’t the point of small talk.

There’s been a strong cultural pushback against small talk in recent years, or at least the idea of it. A cursory search on Twitter indicates that at least once per day, someone goes minorly viral tweeting about how much they hate small talk. It’s a common marketing strategy on dating apps (e.g., “let’s skip the small talk and go straight to the deep stuff”). This very website even published a piece by a staunch small-talk hater about why small talk is so “excruciating.”

To a certain extent, the haters have a point. You can only endure so many Tinder back-and-forths that start and end with “How was your weekend?” until you declare the act of small talk completely pointless. Perhaps you, like many of us, dread the moment you’re asked something about what you’re planning to do for the rest of the summer and your brain decides to take a vacation. Or you might experience the other problem, in which you, out of nerves or masochism or too many cocktails, spill your deepest secrets to a work acquaintance. (I have never done this!)

That combination of performance anxiety and the perceived meaningless of it all is a powerful repellent. But however painful it may be to some, small talk — which can be defined as light, polite conversation about trivial topics, either as a means of opening or closing a social interaction or simply to fill silence — has a point beyond surface-level time-wasting and cookie-cutter DMs. Meredith Marra, a professor of linguistics at the Victoria University of Wellington in New Zealand, has studied the social function of small talk for decades, and says that the very people who complain about it don’t realize how often they use it in their everyday lives. “There are some very masculine workplaces where if you don’t do small talk, everything stops,” she explains. “We can’t just go straight into work because we haven’t established our relationship yet. And if we don’t establish that we’re on the same page, how on earth are we going to get the other stuff done?”

She asserts that small talk is more than just avoiding awkward silence; it’s social glue. “Otherwise you’re just two people, not two people that are connected and trying to do the same thing,” she says.

It’s not new news that small talk makes us happier: In 2014, University of Chicago psychologist and scholar Nicholas Epley conducted an experiment in which some subway commuters were told to spark a conversation with the stranger sitting next to them while others were told to keep to themselves. Those who engaged in conversation enjoyed the ride more, and the longer the conversation, the happier they felt. This was true even for people who generally preferred solitude: “Those who misunderstand the consequences of social interactions may not, in at least some contexts, be social enough for their own well-being,” writes Epley.

Small talk is also a useful tool to build friendships. In Women Talk, published in 1996, the linguistics scholar Jennifer Coates argues that chatter between women, often dismissed as frivolous and unimportant, actually constructs and maintains relationships through layered communicative devices, like storytelling, questioning, and repetition. Even when the conversation doesn’t “matter” in a traditional sense, perhaps that’s part of the joy: a small escape from the serious, a reprieve from the heavier matters at hand.

Nowhere was the importance of casual encounters more clear than during the pandemic, when researchers found that those living closely with others, and therefore more frequently confronted with such encounters, fared better emotionally than people living alone. “I became incredibly grateful for my neighbors,” says Lizzie Post, co-president of the Emily Post Institute, which has provided resources on etiquette for the past 76 years. “Even those very basic, ‘How’s your day?’-type interactions that would happen over the fence became precious.”

The pandemic has had other, more curious effects on how we engage in small talk. Post says the institute typically categorizes conversation topics into tiers: Tier one is what we’d consider appropriate for small talk — safe, comfortable realms that don’t need to be super personal. Tier two might be something a little deeper: conversations you might have at a party or with acquaintances. Tier three topics, meanwhile, are quite personal and mostly discussed with inner-circle family and friends.

Over the past few years, Post has noticed a shift: “We tend to put medical histories in a tier three, but I’ve noticed that a lot more people are willing to disclose whatever part of the medical journey they’re on. The number of people who talk about ‘Yeah, I had a colonoscopy yesterday’ cracks me up, and I don’t think it’s necessarily a bad thing.” (Ditto with finances, perhaps because the pandemic exposed so much of our systemic inequalities that discussing our individual experiences no longer feels isolating, and instead helps us connect.)

It’s certainly reasonable to want to avoid discussing your most recent invasive medical procedure with a stranger on the bus or on a first date, but there are plenty of other reasons people hate small talk that go deeper than just discomfort. For some disabled or neurodivergent people, unplanned social interactions are recipes for sensory overload and stress. What’s more, their aversions to these situations can often have consequences that extend beyond the conversation. “People think we’re not team players because we don’t want to go out to social things or make small talk. It’s quite stressful to have those water cooler conversations,” explains Rachel Morgan-Trimmer, a workplace neurodiversity consultant. But, she says, that doesn’t mean neurodivergent people should automatically take on the burden of adapting to the neurotypical world. “It’s ableist, basically, trying to make people be ‘normal.’ It dampens our uniqueness.”

After her autism diagnosis, Morgan-Trimmer recalls being taught to practice small talk in a group course. “Everyone in my group was like, ‘I don’t want to do that. Why should I be doing that?’”

What would truly inclusive small talk look like? Morgan-Trimmer suggests that people can make others feel more at ease by asking closed-ended rather than open-ended questions. “Don’t ask, ‘How was your weekend?’, ask ‘What did you do this weekend that you really enjoyed?’ You could also ask specific follow-up questions to get flavor and color. ‘I went to the beach’ tells me nothing, but ‘I went to the beach and I had a swim and built a sandcastle and got sand in my eye’ is a story.”

Context, of course, matters, particularly within different cultures. “In New Zealand, if you get into the elevator and say nothing, it is so uncomfortable,” Marra says. “But we know that when we have migrant newcomers into workplaces, they often don’t want to do the small talk, because they think that’s not what you do at work, that it wastes time. As a result, often their colleagues think that they don’t fit in.” She, along with other scholars, have worked with government agencies to create resources for both migrants and employers on how to adapt to and better understand each other.

A common misconception about small talk is that it’s an innate talent that people either have or don’t. But perhaps it doesn’t have to be that complicated. “You don’t have to be great at it,” Marra says. “If someone asks you, ‘How are you?’ you can just say, ‘Fine,’ and pass it back. As long as you’re handing it back and being a good audience member, you’re giving somebody else the chance to shine.”

“I’m a firm believer in the idea that etiquette and manners can be things to turn to when you’re really unsure of what to do,” adds Post. “It can help give you a lot of confidence and take the pressure off of you having to be completely original.”

This, I think, is why most people erroneously convince themselves they’re terrible at small talk: We put so much pressure on the interaction that it becomes impossible to succeed. I tend to convince myself that if a conversation doesn’t land somewhere “deeper” than, say, a tier one topic, then I’ve failed at being sufficiently interesting. But the value of small talk is meaningful on its own.

“Checking in on that surface level doesn’t mean somehow that you are fake or phony,” says Post. “It reflects more authentically our actual lives. Not every day is terribly exciting.” Neither is every person. And that’s okay.