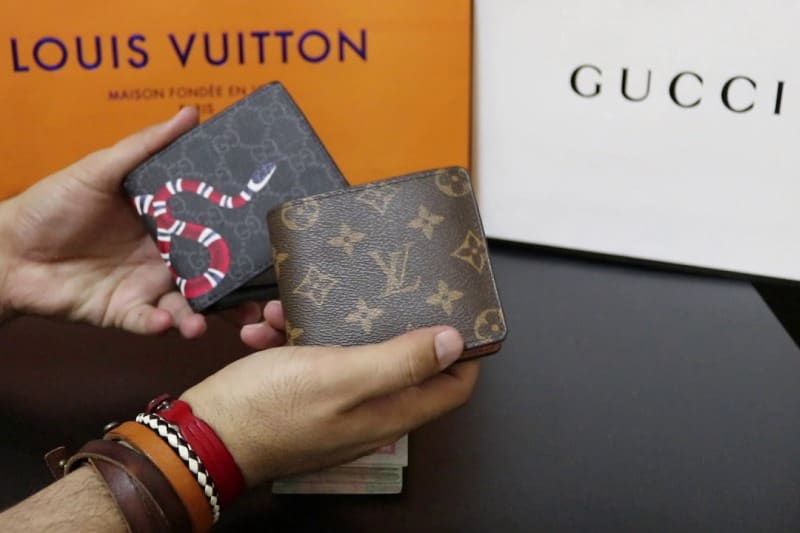 Rappers mention Italian fashion houses in their lyrics and often get criticized for shouting out brands they don’t have a vested interest in. BUT if you look just beneath the surface of Hip-hop and fashion, there’s a rich history that contextualizes the constant shoutouts and reverence paid to these brands by artists.

That history starts in the 80s.
See, before Hip-hop adopted high fashion, it had a very punk edge to it. Most rap stars at the time thought that to reach mainstream (i.e. White) audiences, they needed to dress like the rock stars of the late 70s. That meant being flashy, with wild hair, crazy outfits, etc.

That was the style.
But, in the early 80s, hip-hop went through a massive change: The U.S. was in a recession, and by the mid-eighties, crack was decimating inner cities. The only people who would have enough money to dress in high-end designer clothing weren’t lower middle-class Americans just getting by, nor were they upper middle-class families who were sensibly spending their money and preparing for retirement.

That only leaves two options:
1) The obscenely rich (who are never seen, and as such aren’t really trendsetters)
2) Those with large amounts of cash to spend, and little incentive towards investing for later:

STREET HUSTLERS.
Because the hustlers had the money to spend, they fueled the rise of luxury in Hip-hop. However they still needed a place to go and get their clothes — and that led them to Dapper Dan.

DAPPER DAN CHANGED EVERYTHING
“THE FIRST PLACE I EVER SAW WORK WAS ON ALBUM COVERS.” – DAPPER DAN

Dapper Dan is a designer from Harlem who street dudes would visit for customized clothing in the early 80s. If you had Gucci fabric he could turn it into a crazy Winter coat. If you need a Louis V. tracksuit, but Louis Vuitton doesn’t make one? No problem.

Dapper Dan could do it all.

After a while, everyone from rappers to drug dealers (some of whom were now rappers) frequented Dan’s boutique looking for a customized items to help them stand out.

Dan was outfitting anybody who was anybody in New York, and like all good things, his work began to spread; with one of high points in his fame being the Gucci tracksuits he created for Eric B. and Rakim on the cover of their classic album “Paid In Full.”

Once Eric B. & Rakim wore the custom Gucci tracksuits it was wrap. Gucci was in.

Dan’s influence even trickled into the world of sports where he caught the attention of literal heavyweights like Mike Tyson, and even olympic runner Diane Dixon who donned the iconic Louis Vuitton puffer jacket that subsequently caught the attention of the ALL of the Italian fashion houses who colluded to shut Dapper Dan down for “bootlegging” their products. 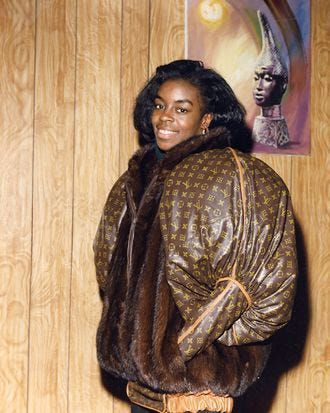 MARC JACOB EMBRACED WITH HIP-HOP
Following Dapper Dan’s work in the eighties, the relationship between Hip-hop and Louis Vuitton continued to grow in no small part due to Marc Jacobs. While other high-end brands found it difficult to embrace hip-hop culture, Marc didn’t – and again, it paid dividends for him.

It was 1997 when Jacobs became the Creative Director for Louis Vuitton, and his appointment had a tremendous impact on the growth of the brand starting with one of the first campaigns to happen under his tenure: A centennial collection featuring one of the fore-fathers of hip-hop, Grandmaster Flash, standing on top of one of their classic totes. 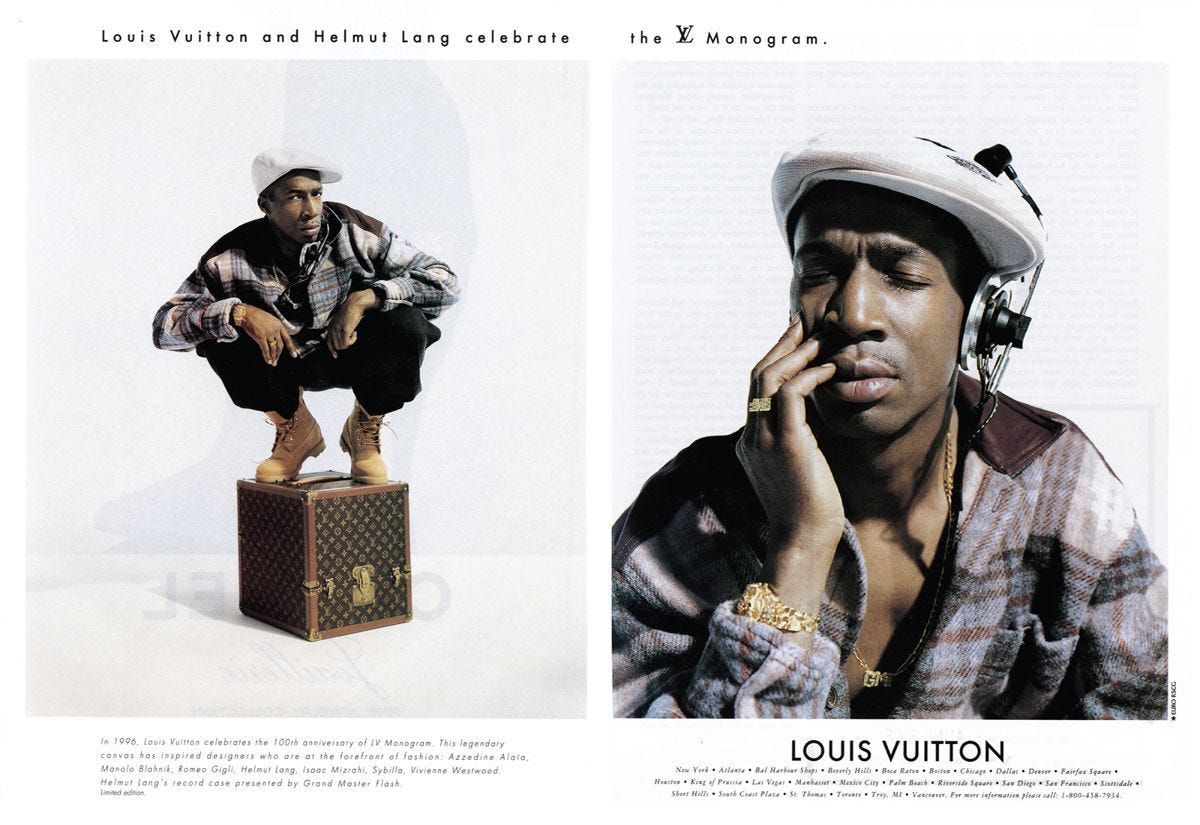 Moreover, in the early 2000s, Marc also struck up friendships with two key stars in the hip-hop community: Pharrell & Kanye West, both of whom he subsequently asked to partner with Louis Vuitton on products, further cementing Louis V. as a “hip” brand worthy of the attention of rap. (Look below to see the shades Pharrell made with Louis) 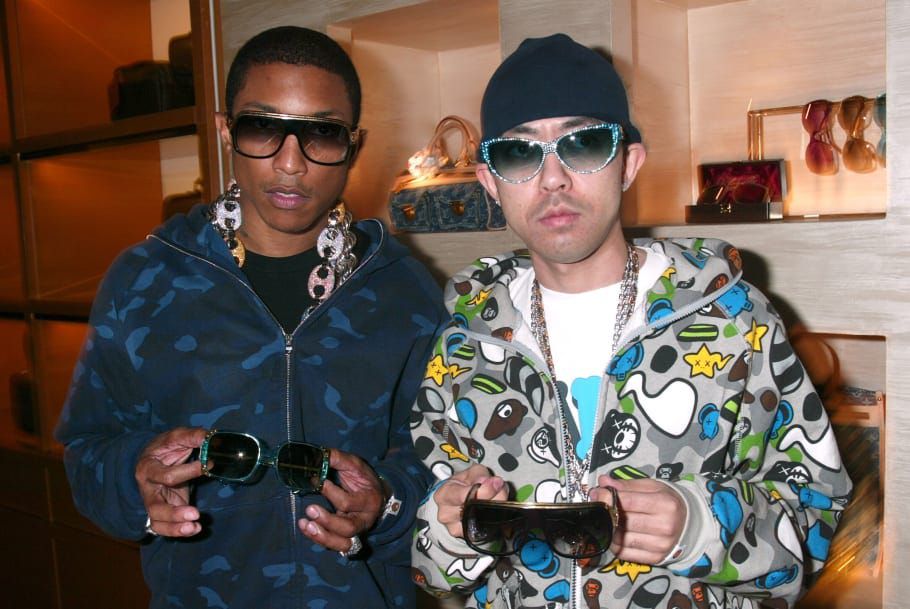 Having these two of the culture’s top influencers on their side, Louis Vuitton’s staying power began to rival that of Gucci’s and ever since they’ve seen nothing but success within Hip-hop circles.

**And before we end, a brief message from the Louis Vuitton Don Kanye West**

AND, THE RELATIONSHIP CONTINUES TO GROW
To this day, the relationship between hip-hop and Italian fashion houses continues to grow. Dapper Dan is now working closely with Gucci in an official capacity – in 2017 Gucci made a VERY similar version of Dan’s iconic puffer jacket & social media stood up for him, which prompted Gucci to find him and offer him a position at the company.

And, thanks to innovators like the late Virgil Abloh, who was the artistic director of Louis Vuitton before his passing, we now see a more intertwined relationship between Black music culture and Italian fashion in everything from print ads to content series.

In 2016, The Migos rocked the airwaves with their single “Versace,” which subsequently led to a resurgence of that brand in the community. And just a few weeks ago, Kanye debuted a new line of clothing with Gap, engineered by Balenciaga — another Italian fashion house that’s rising to prominence in the world of rap.

I don’t own any designer, but who knows. One day I’ll buy a belt or bag. Maybe.

By the way… Gotta give an honorable shoutout to Gucci Mane.