How clean is the air on planes? 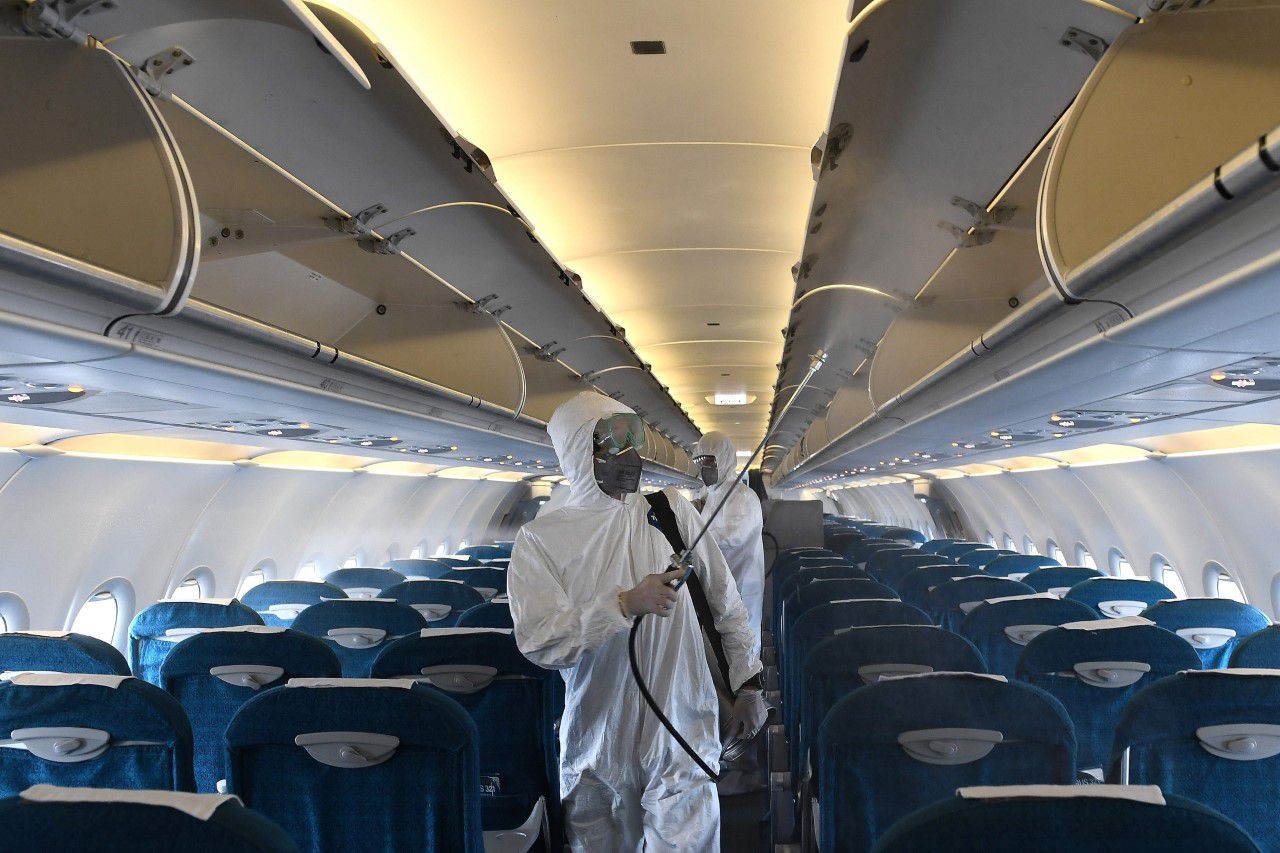 High-tech filters and low-tech masks: How technology and personal responsibility might make flying safer than you think.

THE CORONAVIRUS PANDEMIC has reminded us that having access to clean air is a global health priority. While industrial pollution has dominated headlines for decades, COVID-19 brings the conversation indoors. The quality of indoor air—which way it flows, how much it does or doesn’t allow for pathogens to disperse or disappear—can make the difference between staying well or getting infected. Among the interiors repeatedly named as potential hot zones for infections (churches, nursing homes, and cruise ships) airplane cabins are a focal point of anxiety.

So it’s a surprise to find that the air inside a plane is cleaner than you might think. Thanks to HEPA filters and efficient circulation on commercial aircrafts, the air you breathe in flight—though not necessarily entirely virus-free—is much cleaner than the air in restaurants, bars, stores, or your best friend’s living room. Here’s why you don’t need to fear the air up there.

How airplane air gets cleaned

Most, but not all, commercial aircraft are equipped with HEPA (High Efficiency Particulate Air) filters. That means that, on HEPA-equipped planes, the airflow “mirrors the laminar airflow of an operating room with no or minimal crossover of air streams,” says Dr. Bjoern Becker of the Lufthansa Group of airlines. “Air is pumped from the ceiling into the cabin at a speed of about a yard per second and sucked out again below the window seats.”

About 40 percent of a cabin’s air gets filtered through this HEPA system; the remaining 60 percent is fresh and piped in from outside the plane. “Cabin air is completely changed every three minutes, on average, while the aircraft is cruising,” says Becker. (Lufthansa has a video showing how HEPA filters work.)

(Related: Here’s how coronavirus spreads on a plane.)

Officially, certified HEPA filters “block and capture 99.97 percent of airborne particles over 0.3 micron in size,” says Tony Julian, an air-purifying expert with RGF Environmental Group. The efficiency of these filters, perhaps counterintuitively, increases for even smaller particles. So while the exhaled globs that carry SARS-CoV-2 can be quite small, HEPA filters effectively remove the vast majority from the air. 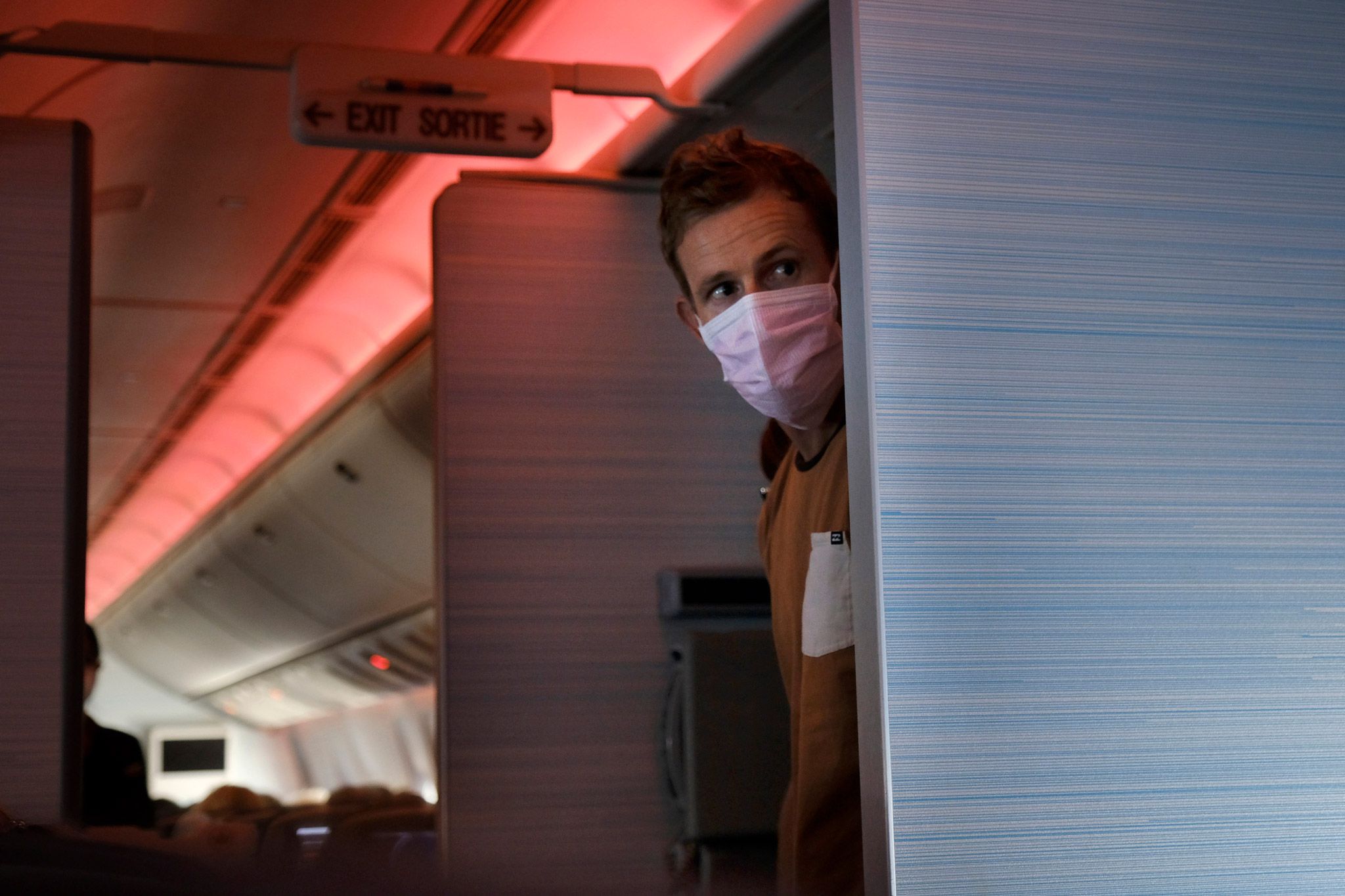 A masked passenger stands on a flight between Vancouver, Canada, and Sydney, Australia in the spring of 2020. Mandatory mask wearing on planes has been strictly enforced by some airlines.

“Typically the number of particles in the air are [sic] really low, the plane is almost a clean room, because there’s so much ventilation, and very few sources of particulate generation within a plane,” says Liam Bates, CEO and co-founder of Kaiterra, an air-quality monitor manufacturer. “[Planes] are actually safer than virtually any other confined space.”

HEPA filters aren’t on older planes or tiny aircraft, which have less effective filtration systems. But even the best filters can’t catch every onboard virus particle, and there are ways airlines, their employees, and passengers can influence their effectiveness.

How reliable are filters?

HEPA’s 99.97 percent filtration effectiveness sounds reassuring, and airline execs count on that. But the biggest problem with those systems, says Bates, is that the “filter only guarantees the quality of the air that has passed through it. If the air that someone breathes in has not gone through that filter, then those numbers don’t matter.”
That’s why, in addition to good filters, airline cabins also need good passengers. This means everyone onboard should wear a mask.

That’s both because of masks’ proven protective qualities and the fact that HEPA filters and rapid-air circulation don’t work at max effectiveness until the plane is airborne. This means that the sometimes-interminable period between grabbing your seat and takeoff (or between landing and disembarking) is when you’re most likely to inhale a cloud of air from a person infected with COVID-19. That stale, warm air you occasionally notice when a plane is on the ground sitting at the gate or idling might mean there’s little circulation through those filters.

As with most technology, “HEPA filters should be inspected regularly and replaced as needed,” says Julian. Holes in the filters or problems with seals, for example, will compromise their effectiveness. Each HEPA manufacturer recommends the maintenance schedule for their products, and most airlines change them more frequently. Even if an airline changed filters less often than recommended, the International Air Transport Association says air flow through the filters might be reduced but their particle-trapping capacity would not. Contrary to what you might think, dirty filters can operate more effectively than clean ones.

Why masking is essential

When we cough, sneeze, and talk, microscopic (and, sometimes, visible) droplets of saliva escape our mouths. Gravity causes the big ones to fall to the ground (or an armrest) quickly, but the smaller ones can hang in the air. The SARS-CoV-2 science is evolving, but there’s now some evidence suggesting that the virus inside those tiny droplets is infectious. 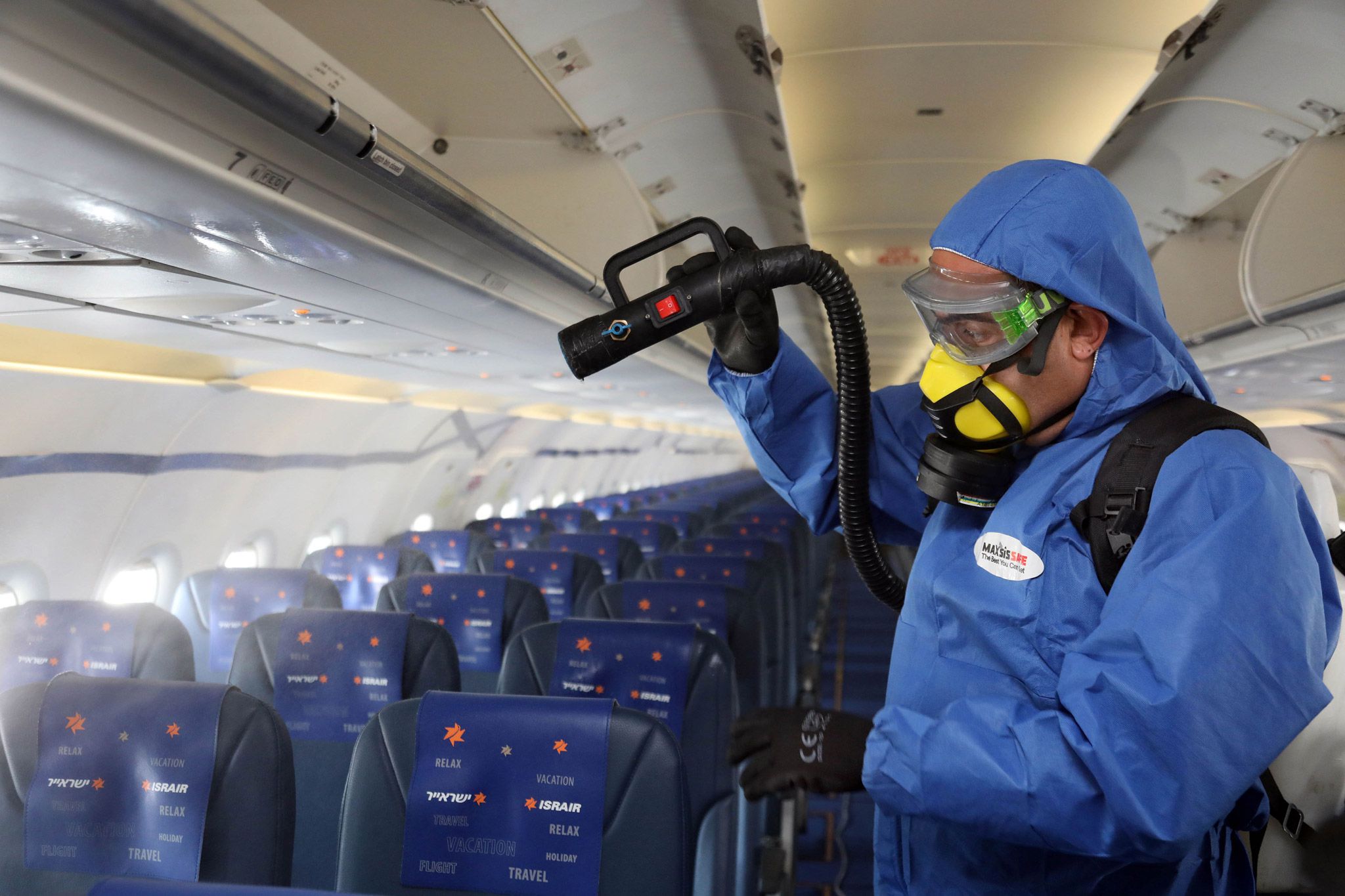 A worker in protective gear disinfects an Asrair Airlines plane at the Ben Gurion International Airport in Tel Aviv, Israel on August 17, 2020.

Wearing a mask the whole time you’re on a plane keeps some of that airborne saliva—and any virus it has—to yourself. There’s evidence that mask wearing both protects those around you and reduces the chance that you’ll get infected yourself. Think of sporting a mask like stowing your laptop during take-off: it minimizes the chance that air turbulence will cause anyone to get hit in the face with something harmful.

In the U.S. there’s no law requiring air passengers to wear masks. Each U.S. airline has implemented its own mask rules (here are American’s, Delta’s, and United’s). There are multiple reports of airlines strictly enforcing them (Delta banned more than a hundred barefaced rebels and has returned to the gate to kick passengers off), as well as ignoring them, or putting the onus on passengers to police those sitting around them. But there are also stories of people flying without masks (or masks worn incorrectly), and of flight crews not making people follow the rules.

U.S. airports and airlines are implementing new screening measures to help keep potentially infectious passengers from making it onto passenger planes. Some rely on the honesty and ethical behavior of passengers, such as airlines that, during check in, ask passengers to certify that they have been free of COVID-19 symptoms for the past 14 days.

Even if everyone who boards a flight is truthful, other passengers still remain at risk because some 40 percent of COVID patients are asymptomatic and many individuals in the disease’s early stages exhibit no symptoms at all. Some airlines, including Qatar Airways, are making masks and face shields mandatory for passengers and crew. The mask protects others and the face shield helps protect you (especially from the virus entering your eyes).

(Related: If you must travel now, here’s how to make it safer.)

Abundant screening measures indicate that airports and airlines are taking COVID-19 seriously, but experts say such measures aren’t always based on scientific facts. “Passenger temperature screenings make us feel like we are doing something tangible to prevent the spread, however, based on the scientific data to date, it is neither efficient nor effective at identifying COVID-19 patients or reducing the spread,” says Dr. Daniel Fagbuyi, an Obama-Administration appointee to the National Biodefense Science Board with experience handling pandemics. Temperature checks with thermometer guns miss 30 percent of people with fevers.

Ways to keep yourself safer in flight

The biggest risk when flying just might be the airport, boarding, and take off/landing experience. People in close indoor proximity, perhaps not wearing masks, could spell infection. Keeping that six feet (or more) of social distance while getting to your gate, into your seat, or deplaning is probably more important than anything else you can do (except covering your face).

If you must fly, choose an airline that enforces its own protective rules. At a minimum, you’ll be less stressed that you’ll have to be a mask enforcer. As of mid-August 2020, it seems that Alaska Airlines is being the most vigilant of U.S. carriers about mask wearing.

While Delta, Alaska, Hawaiian and Jet Blue are, for now, keeping middle seats empty, any resulting COVID protection is likely from fewer people on board, not whether a stranger is sitting a few inches rather than a foot from you. A much-talked about Massachusetts Institute of Technology study released August 18, 2020 found that leaving the middle seat empty on flights decreased a given passengers’ risk of contracting COVID-19 by a factor of 1.8, but it is not yet peer-reviewed.

On board, minimize contact with surfaces and wash your hands well before touching your face (including your mask). There’s no need to fly in a HAZMAT suit, however, says Dr. Ken Perry, an emergency physician in Charleston, South Carolina. “People would be much better off being fastidious with their mask use rather than worrying about gloves and other devices.”

Scientists no longer think that touching objects and then touching your eyes, nose, and mouth with dirty hands is the primary source of COVID-19 transmission. However, a recent report involving inflight transmission suggests an asymptomatic person spread the disease via surfaces in the toilet.

Airlines have upped their cleaning regimes, including disinfecting planes with electrostatic sprayers. And with just-announced emergency approval from the U.S. Environmental Protection Agency, American Airlines will start treating high-touch areas (seat backs, tray tables) with SurfaceWise2, a coating said to kill coronavirus for up to seven days.

In flight, Fagbuyi recommends keeping your mask on as much as possible. That means avoiding eating and drinking while airborne. Cleaning your hands with sanitizer onboard is fine, Fagbuyi says, but “wash your hands with soap and water once you get off” the plane, and especially before removing your mask.

And though it might be uncomfortable, Dr. Joyce Sanchez, medical director of the Travel Health Clinic at Froedtert and the Medical College of Wisconsin, says masking up doesn’t affect your oxygen or carbon-dioxide levels. “The overwhelming majority of people, including those with chronic lung and heart problems, can safely wear them,” she says.

Turns out the best way to make the skies friendlier right now is to cover up your smile.