By Christine Ferretti via The Detroit News 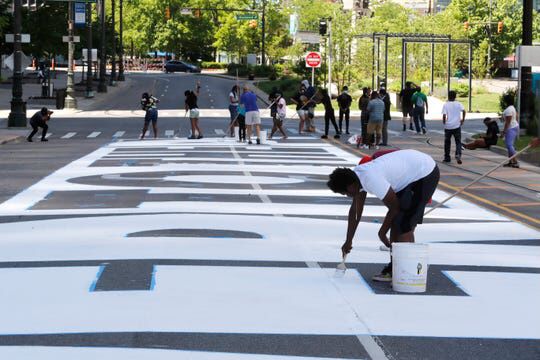 Detroit — Nadia Lawrence grabbed a brush to cover a major city block with a message of peace that she hopes will be permanent.

The 18-year-old King High School graduate was among a group of 20 Detroit students selected for a mural project on Woodward from Jefferson to Larned in the city's Spirit Plaza. The group, with the guidance of award-winning artist Hubert Massey, used red, black and white paint to spell out a message that reads "Power to the People."

"I wanted to stand up for my rights and for people of my same skin color. As an African American female, it's hard out here," said Lawrence, who will head to Central Michigan University in the fall. "I wanted to let it be known it doesn't matter what generation you are a part of, you can make a change."

The project, involving 10 students from the city's public schools and 10 from the youth-led group, Detroit Heals Detroit, got underway Wednesday morning and is part of a citywide Juneteenth celebration. The painting will have an official unveiling Friday. 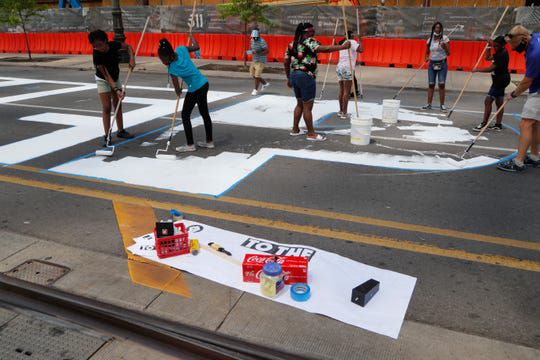 In this Wednesday, June 17, 2020, photo, Detroit public schools students and youths with Detroit Heals Detroit, a social justice organization that helps Detroit youths who have suffered trauma, paint a mural on Woodward Ave in Detroit. The mural, funded by the Knight Foundation and Bedrock, will spell out "Power to the People". (Photo: Carlos Osorio, AP)

Rochelle Riley, the city's director of arts and culture, said she put out a call for students last week and had 35 artists volunteer to participate by a Sunday deadline. From there, the students chose the artist they wanted to work with and sketch with the vision.

The installation comes amid ongoing protests in Detroit and across the country in response to the Memorial Day death of George Floyd in Minneapolis.

"It's so important to have something positive to come out of this movement," Riley said. "This is not a moment, this is a movement. These are the kids that it's going to rest on their shoulders."

Trinity Revels and Angel Dennis, both 17-year-old Detroiters, were riding scooters down Woodward and taking photos near the mural on Thursday.

"I like it. It represents blackness," Revels said. "It’s different. They’re bringing something back."

The mural also caught the eye of Detroiter Sara Stitt, who was walking along Woodward with Warren resident William Cross.

“I think it’s cool. All the other cities are doing it. Detroit should do it, too," the 28-year-old said. "I haven’t seen any other cities with this (slogan)."

The city's week-long, virtual Juneteenth celebration features forums on the history and culture of the black community and commemorates the anniversary of the end of slavery in the U.S. on Friday. 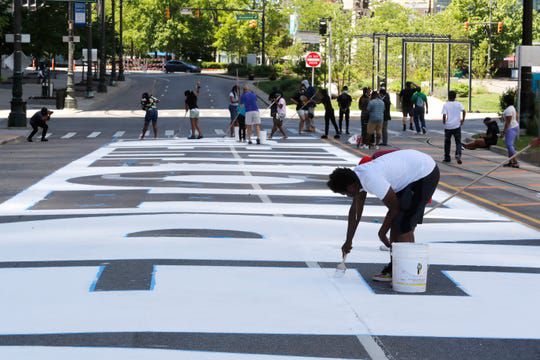 In this Wednesday, June 17, 2020 photo, Detroit public schools students and youths with Detroit Heals Detroit, a social justice organization that helps Detroit youths who have suffered trauma, paint a mural on Woodward Ave in Detroit. The mural, funded by the Knight Foundation and Bedrock, will spell out "Power to the People". (Photo: Carlos Osorio, AP)

A group of students from University Prep Art and Design, led by program director Manal Kadry, volunteered on the mural and helped Massey with the proposal.

Kadry, Dominic Porter, a soon-to-be-10th grader, and Olivia Jones, who is starting high school in the fall, laid every single piece of tape so the others could get their lines right.

"We had to lay it and we had to do it fast so the other students could paint," Kadry said. "I’m so proud of the U-Prep students because they didn’t stop. Everybody could only paint if they finished the tape lining."

They were back on Woodward on Thursday laying the grid for the finishing touch, the fist.

As for the phrase, Kadry said Massey chose it deliberately to be inclusive.

"It’s not being direct. I told him as a black male you should be direct, but he said, 'this is a phrase that I want everybody to relate to. We are the people and we can make change,'" Kadry said. "So I told him, 'if you believe in this, then let’s do it.'"

Massey could not be reached Thursday afternoon for comment.

Riley said about $10,000 to $12,000 was invested from donations in the effort. Massey was compensated $5,000 and each student commissioned to participate received $200.

The mural will be in place for at least the next six months with the expectation it could become permanent.

"This will be there," Riley said. "This is part of Detroit now."