Black Students Are Caught In The Middle Of America's Culture Wars

Black youth are feeling the onslaught of distorted teaching that diminishes their history and lived experiences, along with anti-LGBTQ and anti-mask measures. 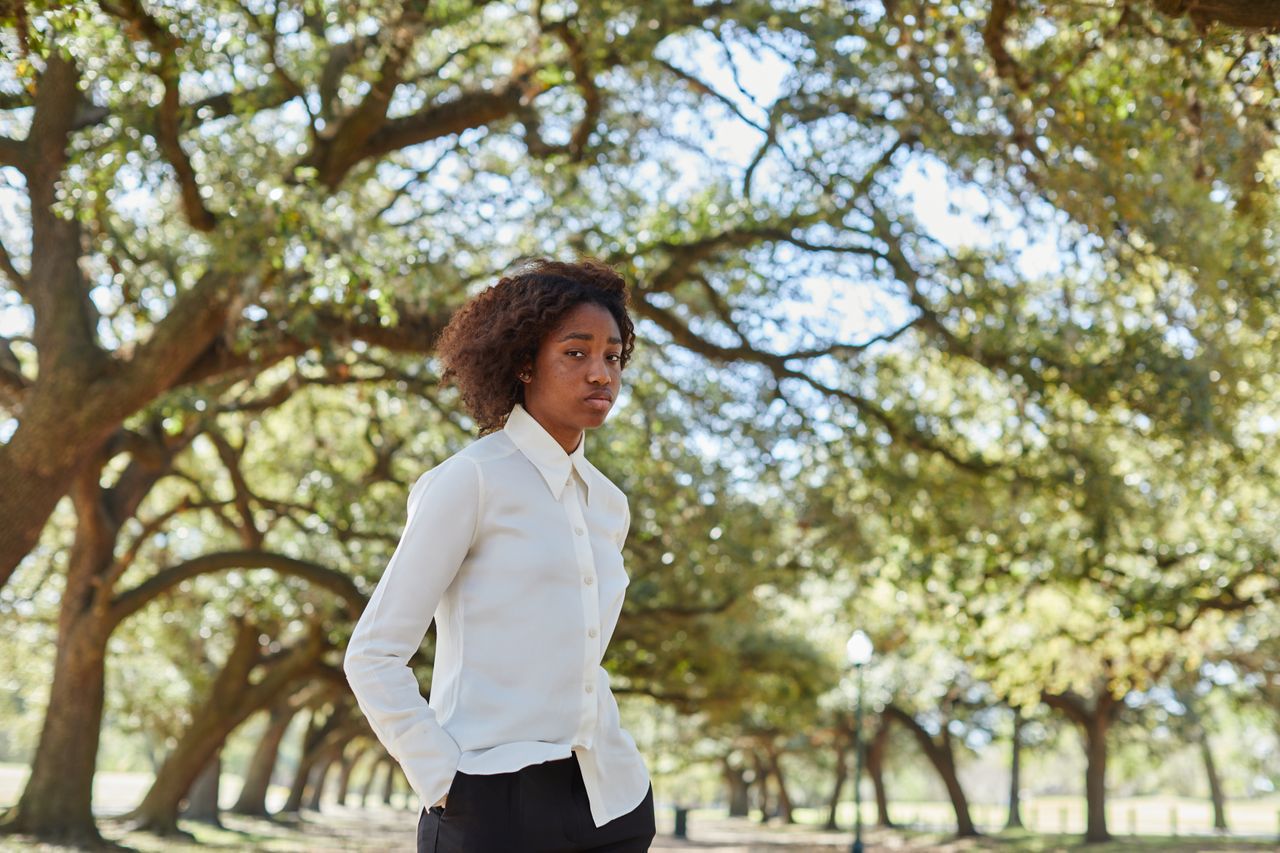 Payton Pinkard always hungered to know more about Black culture and Black people. Sitting in her elementary school classroom, the Black teen remembers “white history, just regular history, and then February would come around.” But the annual detour to a Black-centered curriculum was reduced to a repetitive loop of men and their breakthrough inventions — including Garrett Morgan and his three-way traffic light, George Washington Carver and his peanut products, and Eli Whitney and his cotton gin. Her Black history education was consistently basic and boring.

Then one February she learned that Whitney didn’t create the cotton gin. The machine that Whitney patented in 1794 was actually based on ideas from enslaved laborers. The story of Whitney and the cotton gin — a familiar staple of her Black history lessons — was a myth. This single fact changed Pinkard’s entire perspective on what she’d been taught about Black people’s contributions to this country.

“I was hurt and angry that I was being misled,” she said. “I didn’t like being lied to about my history and something that was stolen from some of my ancestors, some of my people.”

Now a sophomore at Houston’s Young Women’s College Prep Academy, Pinkard, 16, credits this episode with raising awareness of gaps in her knowledge of Black history. Yet filling in the remaining missing parts has gotten infinitely more complex with growing political overreach into classrooms. Conservative lawmakers across the country have passed a rash of bills aimed at stifling teaching and learning — branding accurate yet painful parts of U.S. history as divisive and unpatriotic.

Among the first wave of states that limited open discussions on race and racism was Texas. Opaquely written, the current law states that “a teacher may not be compelled to discuss a widely debated and currently controversial issue of public policy or social affairs.” Since January 2021, 41 states have introduced bills or taken steps intended to restrict how teachers can discuss racism and sexism, according to an analysis by Education Week; 15 states have passed legislation or enacted these restrictions.

What’s more, the same forces challenging teaching on race and sexuality have rallied to remove books from school libraries that affirm LGBTQ youth and lift school COVID protections. While students largely are reeling from the backlash, Black youth say they feel squarely in the crosshairs of the latest culture wars engulfing America’s schools — seeing themselves as collateral damage in a political firestorm.

“The history of Black people runs deep in America and has impacted our society, and yet we don’t learn about it,” Pinkard said. “People are scared to point out that America is racist and its systems were built on racism. And no one is asking us how we want to be taught or how we’re affected.” 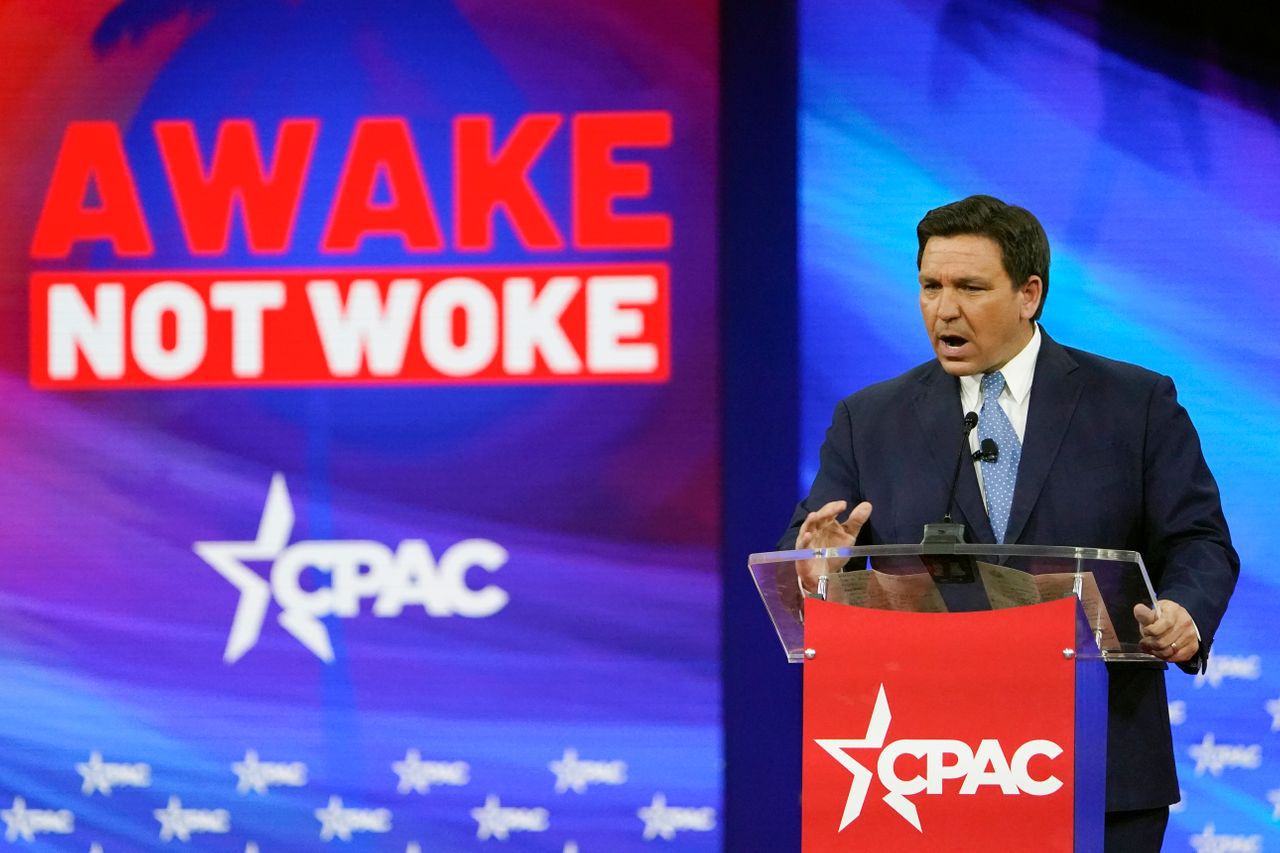 With a broad swath of GOP-controlled states imposing political pressure on schools, perhaps nowhere is the politicization of instruction more flagrant than in Florida. Last summer, the state Board of Education adopted a new rule purportedly to shield students from curricula that might “denigrate the Founding Fathers” or “distort historical events.” This was followed by the “Stop W.O.K.E. Act,” pushed by Gov. Ron DeSantis, which bans teaching that causes “guilt, anguish, or other forms of psychological distress because of actions ... committed in the past by other members of the same race ... ” Having passed both chambers of the state legislature, the “Stop W.O.K.E.” bill awaits the governor’s signature.

What goes unrecognized is the distress Black students face from distorted teaching that diminishes their history and lived experiences.

Leyla Saint-Cyr, 15, of West Palm Beach, feels caught in the middle watching politicians’ machinations. Mostly, she’s troubled by the long-term damage from laws that would exclude thorny material. Recently the ninth-grader was introduced to the Harlem Hellfighters in her Latin American, Caribbean, and African American Studies class at Palm Beach Lakes Community High School. A highly decorated, all-Black combat unit in World War I, the Hellfighters helped win the war, but returned home to face violent racism and Jim Crow segregation in the U.S.

“That was a group of Black people that I never knew existed, even though they were such a vital part of African American history,” she said. “People passing these bills would prevent a lot of students like myself from learning a lesson that means so much to me and my community. If this continues, a lot of the things that we should be learning are not going to be taught.”

Saint-Cyr grasps that the controversy boils down to how certain historical facts and class discussions might discomfit white children and their parents, and bristles at the lack of equity and inclusivity in the current debate. “Why are they prohibiting my education because they’re worried about how someone else is going to feel? The history that’s being taught is what happened, and people need to learn it,” she said emphatically. “I don’t feel equal in this, because why can’t they be worried about me as well?” 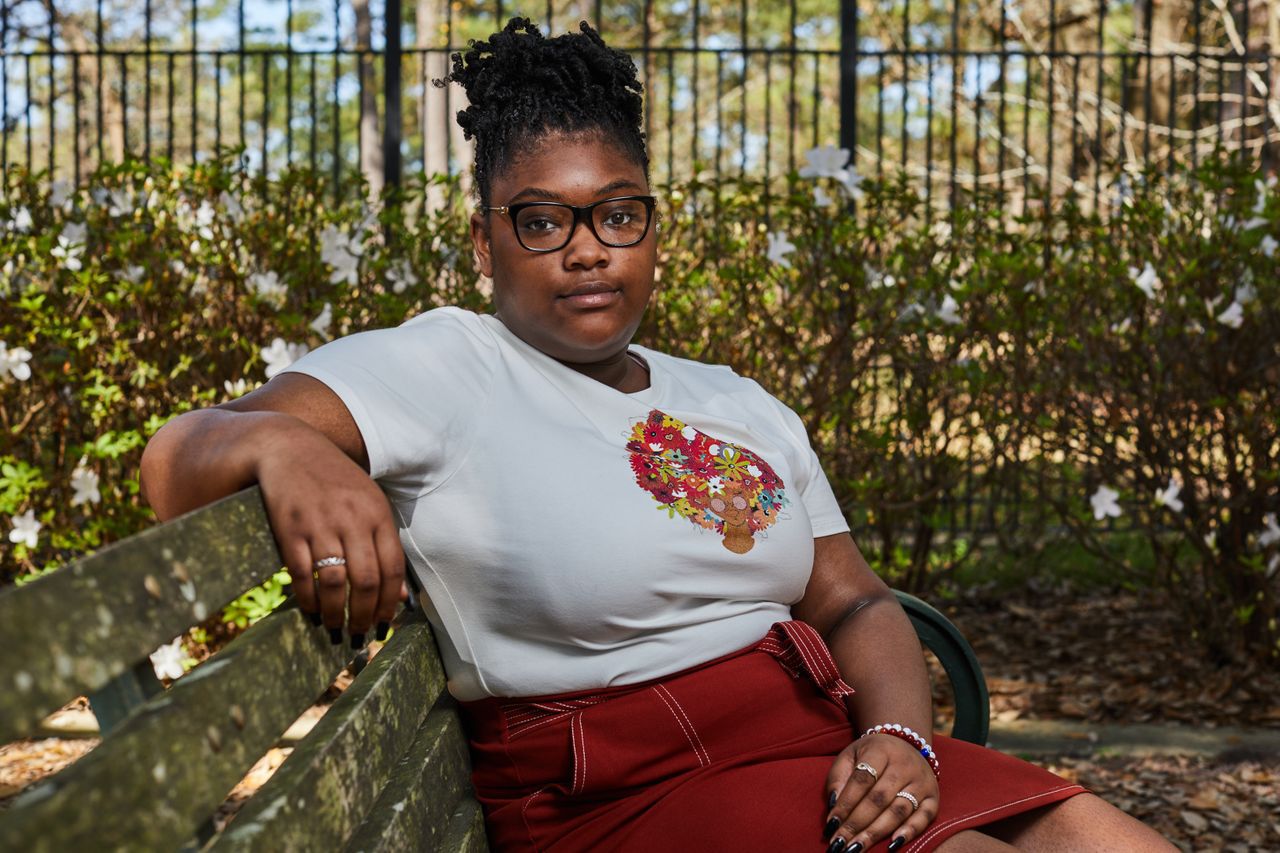 Mykhel Morrison poses for a portrait in Houston, Texas.

That sentiment is echoed by Mykhel Morrison, 16, Pinkard’s schoolmate in Houston. “It’s not like people are making up lies. It is history,” she said. “Black people shouldn’t have to sacrifice gaining knowledge about their history in order to make white people feel comfortable,” calling it “very selfish” to hinder classroom conversations on the nation’s brutal, racist past.

Speaking candidly, Morrison admitted that it is equally difficult for Black youth to be confronted with the inhumanity that Black Americans have experienced — but rejected the notion of spoon-feeding untruths to children. “It’s mentally draining to hear about all the trials and tribulations that Black people have gone through in America,” she stated. “I’m not saying that it’s not uncomfortable to learn, but at the end of the day, it’s the truth.”

A moment that solidified that belief came this year as Morrison and her peers discussed congressional action on the federal anti-lynching law. For more than a century, Congress failed to enact legislation specifying lynching as a federal hate crime. In early March, the Emmett Till Anti-Lynching Act passed unanimously in the Senate, and was signed by the president Tuesday in a White House Rose Garden ceremony.

As Morrison’s class dissected the impending law, the banter turned to the bill’s namesake Emmett Till, a 14-year-old Black boy who was kidnapped, tortured and murdered in Mississippi in 1955. His death was a pivotal event in the Black civil rights movement of the 1950s and ’60s.

But some students in the African American Studies class had never heard of Till, leaving Morrison shocked and saddened.

“That just goes to show how African American history isn’t taught enough,” she said. “Once you realize that other African Americans don’t know such vital points in history, that’s when it becomes alarming.” 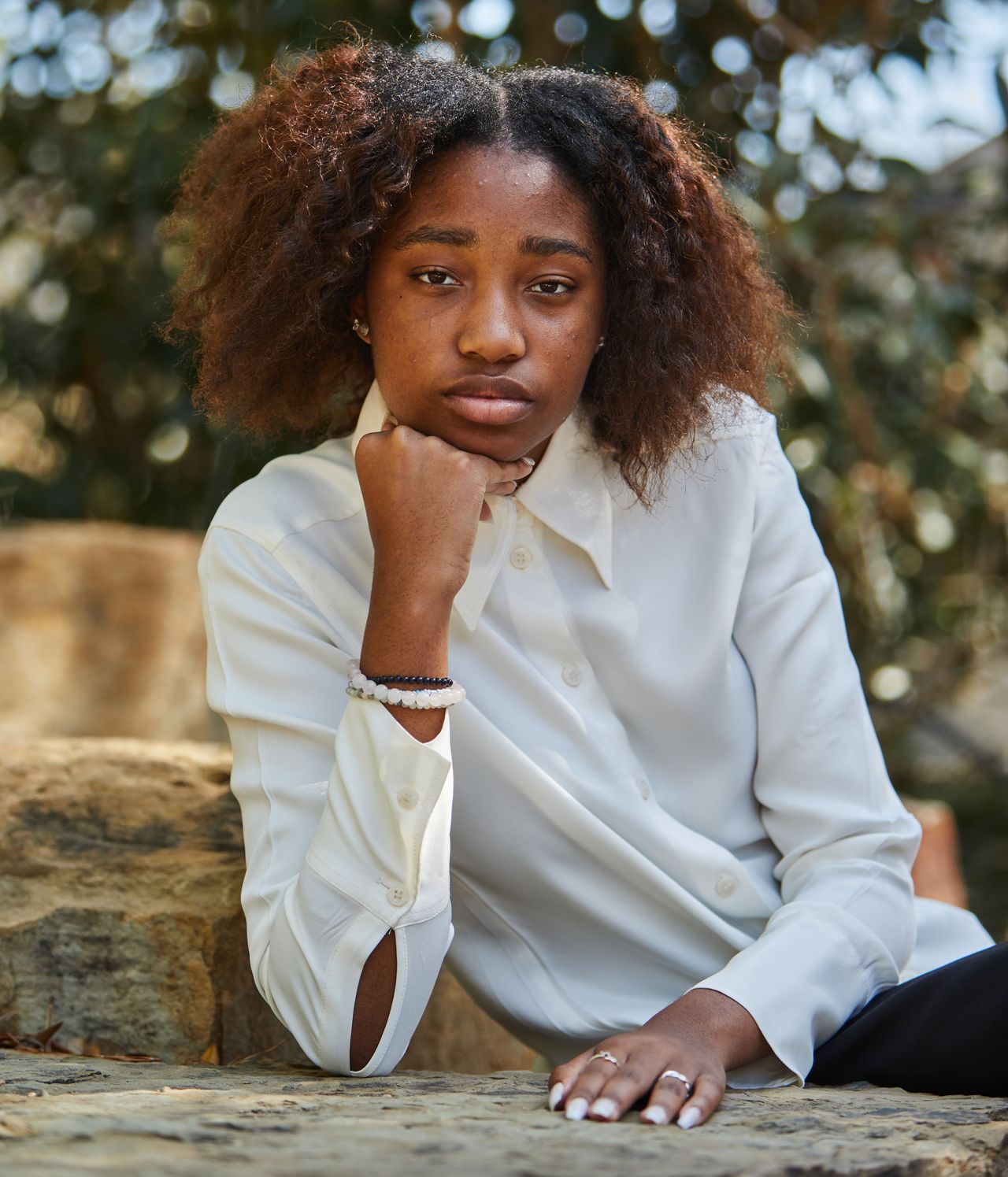 Payton Pinkard poses for a portrait in Houston, Texas.

After defying Gov. Greg Abbott (R) and approving a districtwide mask mandate in August, Houston Independent School District recently changed its policy to make mask-wearing optional. Pinkard was not pleased. “It’s not smart,” she said. “There are lots of germs in schools on a regular day, but now we have a highly contagious disease going around. When we lose that mask mandate, we’re more susceptible to the disease.”

Her concerns are buttressed by CDC data analyzed by the Kaiser Family Foundation, which shows COVID-19’s disparate impact on Black youth. When compared to white children, Black children were more than twice as likely to be hospitalized, and more likely to contract multisystem inflammatory syndrome (MIS-C), a serious condition linked to COVID infections that attacks vital organs such as the heart and brain. The death rate from COVID for Black children was over 2.7 times higher than the rate for their white counterparts.

Still, Black students are actively thwarted from keeping themselves safe. Florida’s fourth-largest school district in Orange County — where about one out of four students is Black — announced in January that it will no longer accept concern over contracting COVID-19 as an excused absence from school. And in Tampa, a Black high schooler who was part of a group of students attending a March press conference was scolded and pressured by DeSantis to remove his face mask.

As the spread of COVID strains Florida hospitals, Saint-Cyr is scared by the lax approach to the disease swirling through her state. “People believing that this entire pandemic is over and they shouldn’t wear the mask anymore really gives me a deep gut feeling of worry that something bad is going to happen ... it’s not good.”

She expressed a similar foreboding about Florida’s so-called “Don’t Say Gay” bill that prohibits discussions of sexual orientation and gender identity in schools. DeSantis signed the bill into law on Monday. Critics of the bill argue that it stigmatizes and discriminates against LGBTQ youth, an already vulnerable group. Saint-Cyr and other members of her high school’s LGBTQ+ club fear school will become a more hostile and unwelcoming environment, and research confirms this prediction.

A 2020 report from GLSEN on Black LGBTQ youth in U.S. schools found the majority had experienced harassment in school because of their sexual orientation, gender expression or race, and concluded that an LGBTQ-inclusive curriculum and LGBTQ-supportive educators were both associated with greater feelings of school belonging and safety. 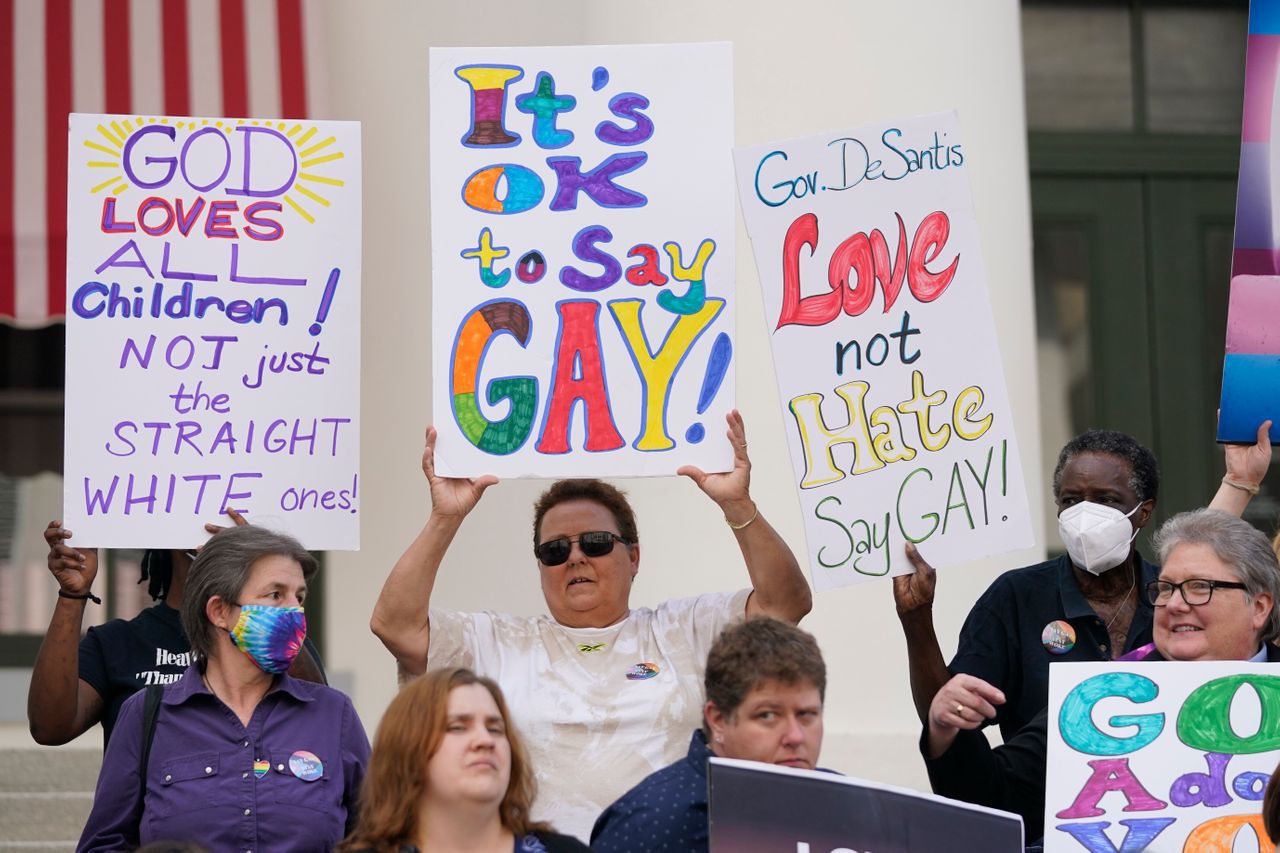 Janice Byrd, an assistant education professor at Penn State University, said the increasing political infringement on schools only exacerbates the anti-Blackness that young people have historically encountered in educational spaces.

“It creates a form of erasure,” she said, in which Black youth come to believe “consciously or unconsciously that who they are is inherently flawed and unimportant.” Black adolescents, given their stage of cognitive development, could perceive these political actions as personal, and possibly internalize negative messages about themselves and their identities, explained Byrd, who studies Black students’ social and emotional growth.

Ultimately, Byrd said, how Black students as racialized beings navigate anti-history, anti-mask and anti-LGBTQ measures can manifest in multiple ways — as sadness, anger, indifference or even a heightened sense of activism.

When racist incidents involving white classmates rocked her community in May 2020, Kayla Evans, a senior at Decatur High School, was outraged and protested. She brought the same energy when legislators recently introduced several proposals to ban “divisive concepts” in Georgia classrooms and impede teaching of America’s structural racial inequality. Evans, 18, was the opening speaker at a February rally organized by social justice groups that oppose the bills. In her remarks, she called attention to why her education should not be tailored “to accommodate people who want to ignore the dark sides of American history since it makes them feel guilty.”

She also participated in a march on the state capitol on Feb. 25 with Decatur high school students who were moved to act against censorship in the classroom. “If this bill is passed, it will cripple schools’ freedom to educate their students on important topics such as race ... ,” the students wrote in a statement, urging schools to “normalize talking about the experiences and the histories of all of our students” or risk “promoting a breeding ground for division, ignorance and hatred.”

Evans said a common theme at the student-led protest was the power that Black youth and their allies hold in this fight. The school culture wars have emboldened her to view obstacles as fuel to spur needed changes.

“I’m eligible to vote along with many other teens,” she said, “and come November, if things aren’t turning around as they should be, legislators should be shaking in their boots as we march to the polls to vote them out.