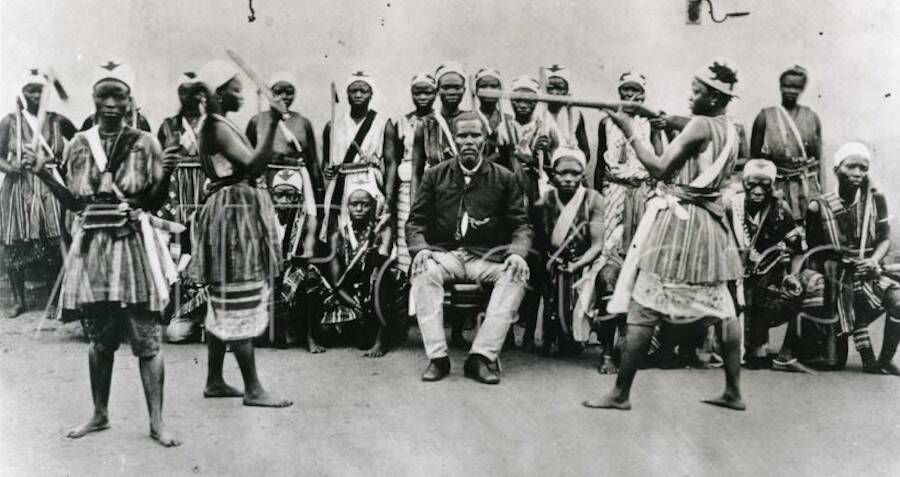 Who were the ‘Dahomey Amazon’ warriors who struck fear into the hearts of men?

The Mino warriors were brave and ruthless. A formidable all-female military regiment in the Kingdom of Dahomey, West Africa (modern-day Benin), these women struck fear into the hearts of their enemies and those who observed them.

There are a couple of different stories regarding the founding of the kingdom, with one tradition claiming that it was founded around 1625 by Do-Aklin. Likewise, there are several theories about the origins of the Mino warriors themselves, stories that have been passed down either through oral history or taken from the written sources of contemporary European colonists. These Europeans referred to the Mino as the ‘Dahomey Amazons’, taking the name from the race of women warriors in Greek mythology. However, the term ‘Mino’, the word for ‘our mothers’ in their native Fon language, is used to refer to these women today.

It is frequently claimed that the Mino was formed when women became bodyguards to either King Houegbadja or to his younger son, King Agaja, sometime during the 17th century. Women were an ideal choice to serve as bodyguards because men were not permitted in the royal palace with the king at night. The decision to train female soldiers may have also been inspired by the Gbeto, the female warriors who hunted elephants. Another theory argues that the Mino was established during Agaja’s war against the Oyo Empire, in which his army contained women dressed as male warriors at the back.

However, oral history suggests that Houegbadja’s daughter Tassi Hangbe, who briefly ruled Dahomey after the death of her twin brother King Akaba, may have created the all-female unit before she was deposed by Agaja. Clearly, the origins of the Mino are disputed, but we do know that they were integrated into the army by King Gezo, who ruled Dahomey from 1818 to 1858. It was during his reign that around half of the kingdom’s armed forces comprised of the Mino alone.

One of the reasons why women were likely recruited as soldiers was because of the lack of men available to join the army. Not only had numerous men been lost in previous conflicts, but the economy of Dahomey relied heavily on the slave trade. Lots of men were sold off as slaves to European traders, so it became necessary to train women as soldiers to fill the gap.

In fact, Queen Victoria sent Royal Navy Captain Frederick E Forbes to Dahomey twice, in 1849 and 1850, in an attempt to persuade King Gezo to stop participating in the slave trade. Forbes was ultimately unsuccessful, although he did write an account of his time in Dahomey that provides one of the insights we have into the Mino warriors.

Women were usually recruited to become soldiers for the Mino as teenagers. Many of them chose to join the regiment voluntarily but, sometimes, girls and women were sent to join the Mino by their fathers or even their husbands for being too unruly or headstrong. And it was not just women of the Fon who joined the Mino – female prisoners of war and girls who were seized during village raids were also trained.

As part of their training, the Mino took part in a series of drills and weapons training – the surviving bas-reliefs on the royal palaces in Abomey, once Dahomey’s capital, show that the women used weapons such as machetes, clubs and muskets. To build their endurance, trainee warriors would climb a wall covered in thorns over and over again, until they could no longer feel the pain.

Their training was also designed to expose them to death and to ensure that they could kill without hesitation. In a test designed to assess their capacity for cold-blooded brutality, the recruits had to lift prisoners of war, tied up and unable to escape, above their heads and drop them from a height that would instantly result in their death.

In December 1889, French naval officer Jean Bayol wrote an account of a teenage recruit undergoing a similar test, in which a prisoner sat tied up in a basked was brought in front of her. According to Bayol, she “walked jauntily up, swung her sword three times with both hands, then calmly cut the last flesh that attached the head to the trunk… She then squeezed the blood off her weapon and swallowed it”.

The Mino lived within the walls of the royal palace and were considered married to the king. However, they were sworn to celibacy, as pregnancy would have prevented them from fighting. When the women travelled outside of the palace, they were followed by a slave girl who would ring a bell to warn people of their approach, so they could avert their eyes. Men were not supposed to look at the Mino and if they dared to touch one, they would be sentenced to death.

The Mino comprised of different units, including the riflewomen, the reapers, the archers, the gunners and the huntresses, with the latter inspired by the Gbeto. Each of these units had their own uniforms, battle songs and dances, which they would also perform during parades for the king.

Although their military prowess is the focus of most attention, these women also had a political role too. They participated in the Grand Council and debated policy, in particular speaking against Dahomey’s continued involvement with the slave trade. Ultimately, being a Mino warrior offered these women a form of independence, something that was not available to other women in the kingdom.

Of course, the Mino participated in many battles. For example, in 1727, during the reign of King Agaja, their involvement helped Dahomey conquer and annex the Kingdom of Whydah. They notably fought during the battle at Abeokuta against the Egba in 1851, to capture people who could then be sold as slaves. They were led by Seh-Dong-Hong-Beh, who commanded an army consisting of 6,000 Mino warriors.

These warrior women were determined to be better than the men and, devoted to their king, they would fight to the death rather than accept defeat. Indeed, European sources claimed that the Mino were a lot braver than their male counterparts, with Forbes stating, “what the males do, the amazons will endeavour to surpass.”

The Mino proved this during the first Franco-Dahomean War in 1890 and the Second Franco-Dahomean War from 1892 to 1894. Africa was carved up among the European powers and the United States at the Conference of Berlin of 1884-85, which excluded African leaders and their people. The conference legitimised and formalised the European colonisation of Africa, with France becoming the dominant colonial power in West Africa.

France had already established commercial treaties with King Gezo, which allowed them to place traders and missionaries in Whydah and the port of Cotonou. However, this partnership began to turn sour when France gave the kingdom of Porto-Novo, a Dahomean tributary, protection against the British in 1863. King Glele, Gezo’s son who succeeded him in 1858, resented French involvement in Porto-Novo, as well as France’s increasing claims to Cotonou.

Glele died in 1889 and he was succeeded by his son, King Béhanzin, who believed that the French were compromising his own sovereignty. The situation reached a boiling point in March 1890, and the First Franco-Dahomean War began when Behanzin ordered his army to attack the French at Cotonou. The Mino warriors were able to enter the protected forts and engage the French soldiers in hand-to-hand combat, reportedly decapitating some of them. Meanwhile, some of the Mino warriors were impaled by French bayonets.

As ferocious as the Mino were, they were unable to match the French in terms of weaponry and sheer numbers. The series of attacks by Dahomey failed and by October, Béhanzin was forced to cede Cotonou to the French and accept Porto-Novo as a French protectorate. Nevertheless, the king quickly began to re-arm his soldiers with modern weapons with the expectation of confronting the French again. The Mino being equipped with Winchester rifles.

Two years after the war ended, the Second French-Dahomean War broke out when Dahomey attacked villages in the Ouémé Valley, where the French had territorial claims. France declared war and a series of battles ensued as their troops moved closer to the capital of Abomey. The Mino were on the frontline, and in the final battle at Cana in November 1892 they fought the French with everything they had. However, it was not enough and after two days they were forced to withdraw, with Abomey falling to the French.

The fall of Abomey marked the end of the Kingdom of Dahomey, which was subsequently incorporated into French West Africa. Béhanzin chose to burn all of the royal palaces, leaving them in ruins, before fleeing northwards. He finally surrendered himself to the French in 1894 and was exiled to Martinique, bringing the Second Franco-Dahomean War to an official end.

The Mino was disbanded with the collapse of Dahomey. Although the regiment ceased to exist, oral tradition suggests that some of the women continued to secretly protect Agoli-Agbo, Béhanzin’s brother. He had been given the throne by the French in return for agreeing to Dahomey’s surrender, remaining as king until France took direct control in 1900.

Even though the Mino came to an end over a century ago, interest in their lives has grown in recent years, as comparisons have been drawn between them and the Dora Milaje, the all-female bodyguards and warriors who serve the character Black Panther, in the Marvel Comics. More importantly, however, the Mino traditions – including their songs, dances and legends – are still being kept alive by their female descendants today, ensuring that their legacy lives on.