By Julian Kimble via Essence 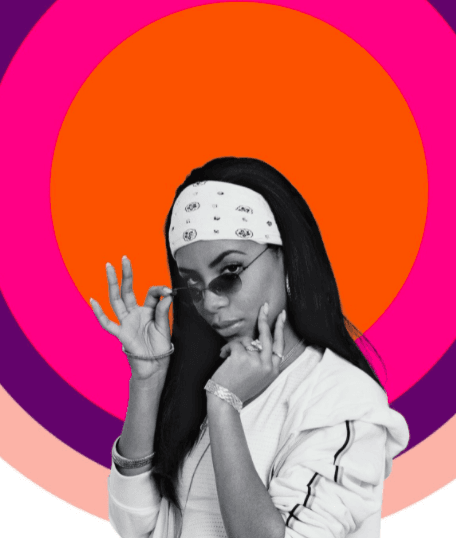 In her brief seven years as a recording artist, Aaliyah left a lasting legacy.

Twenty years after her tragic death, fans and celebs still look to the singer for inspiration

Aaliyah emerged as a star in 1994 at the age of 14. But her second album, 1996’s One in a Million, made it clear that she was in a class of her own. Whether clad in leather while lying atop a vintage convertible, reclining on the iron throne of some subterranean hideaway or slinking along to Timbaland’s hypnotic syncopation in an all-white room, Aaliyah had an incomparable allure. She became an icon by daring to push past the norm, and in the 20 years since her tragic death, the singer and actress’s influence has become ubiquitous, proving she was always light years ahead of the rest of us.
“She was beautiful and polished in her presentation,” says Chrissy Murray, her former publicist at Atlantic Records. “She was a tomboy with this cool, feminine sex appeal. There was just something about this girl—but what I liked most about her professionally was that she came prepared. She knew what she wanted."

Beyond her music and videos, Aaliyah became a style icon and a breakout movie ingenue.

Unafraid to experiment, Aaliyah refined her style throughout her career. Even her famous tomboy aesthetic went through several phases, from the leather camo pants and different color Clarks Wallabees she wore in the “Hot Like Fire” video to the snake-skin sweatsuit seen in the visuals for “Back in One Piece.” Aaliyah could pull off a sci-fi–heroine look, then glam it up with a crystal choker accentuated by full-face makeup—the latter of which would inspire a posthumous MAC Cosmetics collection in 2018.

“She was the kind of girl who had to live it, feel it and be it,” says Derek Lee, who began styling Aaliyah in 1996. “She couldn’t just throw it on, because it wouldn’t translate.” Yet even as her style matured—as with the tiger-print Roberto Cavalli dress she wore to the 2000 MTV Video Music Awards, which model Paloma Elsesser recently paid homage to—it always appeared effortless. “She was that slightly unconventional pretty girl, but without trying so hard,” Lee says.

That down-for-whatever spirit extended to Aaliyah’s music. Her work with Missy Elliott, Timbaland and Static Major propelled every aspect of her career forward, welding hip-hop and R&B in an eccentric fashion leading up to the millennium. The foundation for Elliott’s path to virtuosic artist is built on her work with Aaliyah, who also breathed life into some of Timbaland’s most abstract compositions. To this day, nothing is more ambitious than “Are You That Somebody?” featuring Aaliyah’s soft soprano gliding over an off-kilter drum-and-bass combination and, of all things, a sampled baby coo.
—CHRISSY MURRAY, PUBLICIST

Years after blazing trails creatively, the five-time Grammy Award nominee and three-time American Music Award winner has birthed creative daughters and sons. Look at Syd Tha Kyd. Kelela. Tinashe. FKA Twigs. Ciara. Even Drake. And there’s been no shortage of covers, samples and tributes from contemporary artists inspired by her oeuvre—even as the bulk of her discography remains absent from streaming and digital platforms.

Aaliyah and her artistry live on as a symbol of perseverance. As one of R. Kelly’s alleged victims, she survived an industry that forces young women to grow up fast while infantilizing and excusing the men accused of exploiting them. But Aaliyah has never been the sum of her trauma. Rather, she seized autonomy in her life, taking control of her sound, look and image. “Now you have younger women who are like, ‘Yo, I can do this,’” Murray says, attributing their confidence to the example set by Aaliyah. “Her boldness is very appealing to women.”

In the past decade, Aaliyah’s image has become a favorite across social media. Even from the afterlife, she’s captivating audiences that now include people who didn’t grow up hearing her music in the moment. “The love that your mom, auntie, or older sister or brother had for her is passed down to younger people who are curious,” Murray says. Aaliyah’s contributions represent a huge swatch of modern pop-culture’s fabric. She is more than a woman, in that sense: She was the future. And now she is everywhere.