Are Robots Coming For Models’ Jobs? With virtual shows becoming the new normal, the modeling profession is feeling the pinch.

By Veronique Hyland via Elle 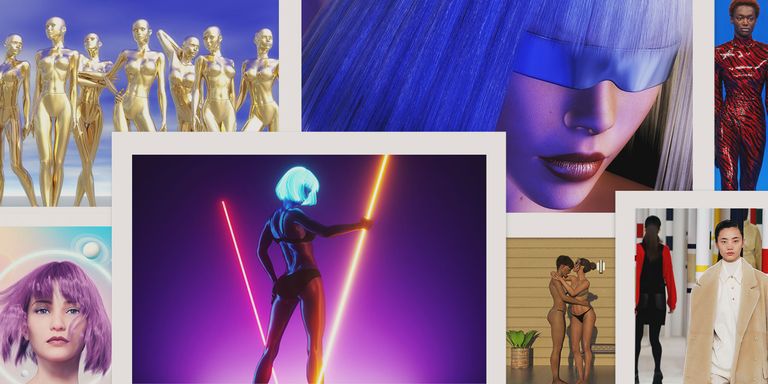 Style Points is a new weekly column about how fashion intersects with the wider world.

Traditional fashion shows weren’t working, the designer felt. They were too stuffy and exclusive, not in step with the rhythms of the technology-savvy present. So he decided to do something a little different.

This sounds like a scenario that could easily happen today, but in this case, the year was 1998, the designer was Helmut Lang, and his futuristic workaround was to show his collection on CD-ROMs. (Remember CD-ROMs?) The same medium that once brought you Encarta showcased Lang’s avant-garde designs. In a review of the virtual show, the New York Times’s Constance White wrote, “The grand experiment was not without its drawbacks, but it points the way to the future in a global industry searching for alternatives to runway shows.

“It is odd," she added, "that in an industry that lives by changes every season, the method of presentation has not changed in almost 50 years.”

More than two decades later, the conversation about how to reinvent runway shows continues apace. And the challenges of showing in a global pandemic have only forced it forward. Even if they’re a product of socially distant necessity, some of the alternative shows have been genuinely thrilling. A standout was young designer Anifa Mvuemba, who presented her Hanifa collection in 3-D using virtual models. The innovation-friendly format and reduced cost are also helping young designers showcase their wares in a time when money is tight. And when Fashion Week officially rolls around this fall, we can expect to see more virtual shows from bigger names. 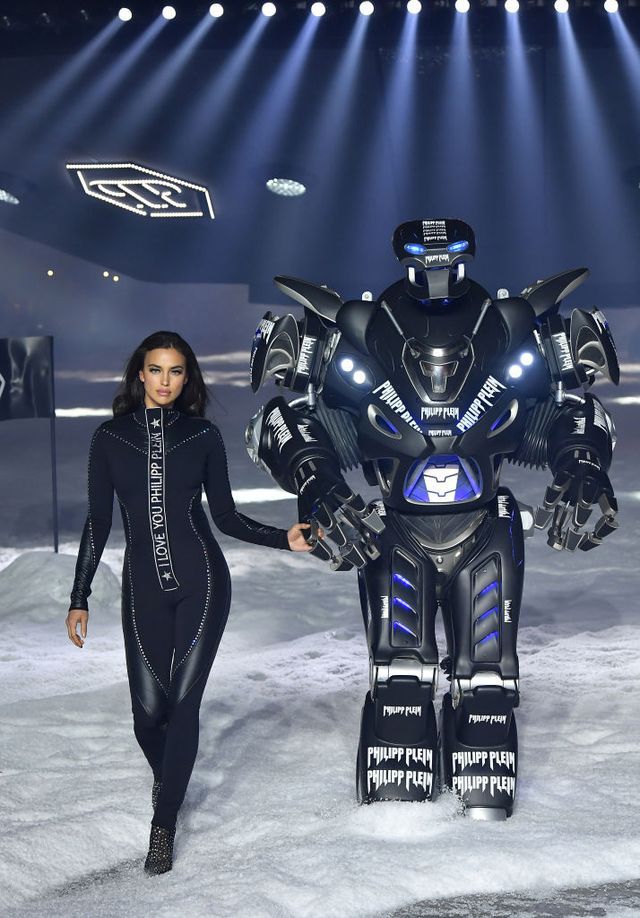 Irina Shayk shared the runway with a robot at a Phillip Plein show in 2018.

But who gets left out of this grand virtual future? In many cases, the answer is, the models and the backstage teams around them: hairstylists, makeup artists, and stylists. When models are replaced with avatars, it's not so a far cry from factory workers being replaced with automatons or cashiers dwindling in favor of self-checkout kiosks. It’s a labor issue, and those who advocate for models are noticing the shift.

“I think there’s always going to be an interest in human beings and their lives, and evolution of their careers, but that’s something the girls are watching,” says Sara Ziff, the founder and executive director of the Model Alliance, referring to virtual models replacing real ones. Well before social distancing, virtual influencers and models like Lil Miquela and Shudu developed massive followings and appeared in shoots. Now, they may be even more bankable. In May, Lil Miquela signed with CAA as the agency's first virtual client. "When [models] become less necessary in order for the client to tell the story, that’s where we’re going to see a huge seismic shift,” predicts Doreen Small, a partner at Davis Shapiro Lewit Grabel & Leven and adjunct professor at Fordham Law School's Fashion Law Institute.

For already-recognizable, successful models, turning themselves into avatars may be a great business move. “I’ve been seeing agencies working to build CGI creatures based on models who were signed to them, and doing deals with those models," says Small. On the other hand, "I’ve also seen models’ likenesses being morphed into CGI, and the creator saying, ‘Oh no, this is completely random, not based on anybody.’”

"There is a legitimate concern that people are being taken advantage of unknowingly."

A less public-facing side of the industry has also been affected, explains Ziff. At the Model Alliance, “we’ve heard particularly from fit models, who have raised concerns about 3-D body scans...which the company can use to do the fit models’ job on a computer." Some are being asked to sign away the rights to those scans. "I think there is a legitimate concern that people are being taken advantage of unknowingly," she says, "and that is going to really cut into that part of the industry.”

Especially right now, there's another distinct advantage avatars have over humans: they can't get canceled. “What I’ve been seeing are amped-up morals clauses, to reflect this moment in time,” says Small. The real rise of our robot model overlords may ultimately come about not because CGI models and influencers are less expensive or easier to deal with—but because they can't say anything that might turn into a headline.