A fourth COVID-19 wave is brewing in the U.S.

By Chris Wilson via TIME 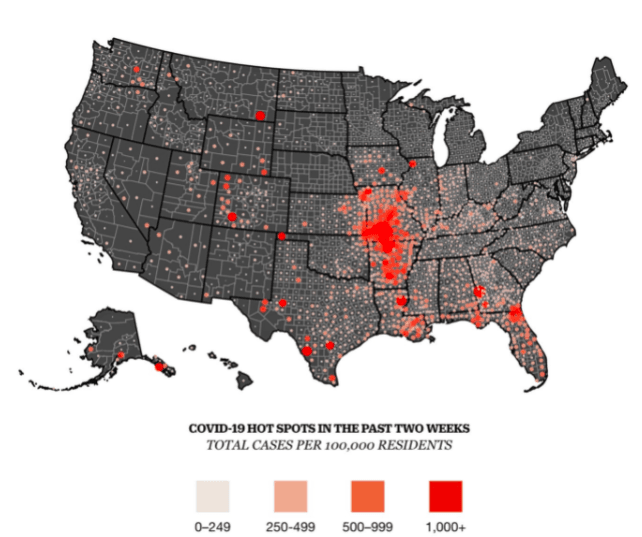 In the first half of July, the number of new daily COVID-19 cases across America nearly tripled, from 13,700 on July 6 to more than 37,000 on July 20. It’s a surge that harbors grim reminders of past waves in the summer and fall of 2020, but also one that looks significantly different from those we have seen before.

Even at its worst heights, the pandemic has never struck the U.S. uniformly. Instead, it wandered from urban areas to suburban and rural counties and then back again. The map above shows the 14-day growth in cases per 100,000 residents at the county level, capturing in finer detail the variations in completed vaccination rates per state: Alabama has vaccinated just 33.9% of residents as of July 21, for example, compared with nearly 70% in Vermont. The per capita rate of new cases clusters in regions where a majority of adults remain unvaccinated. And those case rates are contingent on the numbers of people being tested for COVID-19, figures that can only underestimate the true picture.

Methodology: Figures were calculated between July 4 and July 18 using data provided by the Johns Hopkins Center for Systems Science and Engineering