Here's how experts say parents should approach conversations about Instagram, TikTok and more. 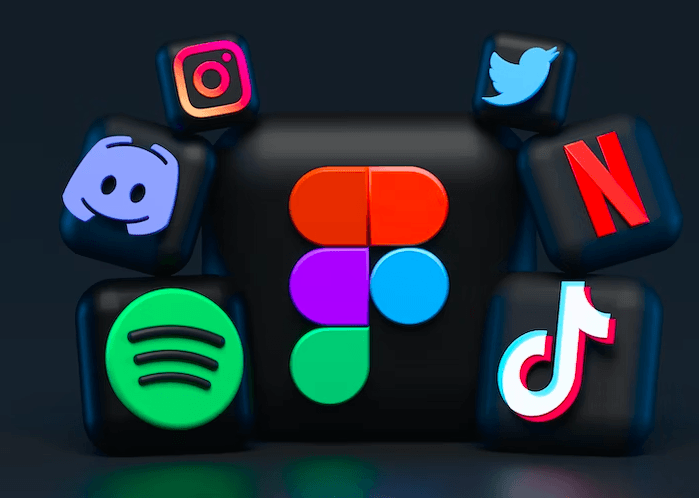 Parents may feel apprehensive thinking about their kids on social media, but the reality is young people regularly use platforms like Instagram, TikTok and Snapchat.

A survey published by Common Sense Media in March 2022 found that 84% of teens and 38% of tweens say they use social media, with 62% of teens and 18% of tweens saying they use it every day. These numbers underscore the importance of talking to young people about these platforms and their experiences.

“When parents don’t have regular conversations about social media with their kids, they can be very lost regarding the content their kids are engaging with and the people with whom they are connecting,” Keneisha Sinclair-McBride, a clinical psychologist at Boston Children’s Hospital, told HuffPost. “This can make it difficult to help if your kid runs into social media difficulties or sees some troubling content. It can create too much secrecy around social media, when openness is much more optimal.”

Instead of making assumptions or showing judgment, be curious and open-minded about your children’s relationship with social media. Ask questions and be prepared to listen, even if it feels awkward.

“Since social media is such a huge part of most preteens and teens’ lives, talking to them about their social media accounts allows you to connect with them on their level and have meaningful conversations about their interests and their views of the world,” Sinclair-McBride added. “The more they can show that they are willing to listen and help when needed, without just shutting down or taking their kid’s phone away, the more their kids will be willing to be open and honest with them.”

To help inform these conversations, HuffPost asked Sinclair-McBride and other experts to share the questions they recommend parents ask their children about their social media accounts.

What accounts do you have?
“Some parents are genuinely unaware of what their kids are doing on social media,“ Sinclair-McBride said. “This basic question gives them a place to start. Parents can research information about the different social media platforms their kid is on and help them manage their accounts in safe and developmentally optimal ways.”

However, as you broach the topic, don’t just immediately jump in with this question.

She recommended first connecting with them about something in your own social media world by saying something like, “I had to put my phone down today because someone said something on Facebook that made me so mad!”

“After they’re done laughing at you because you still use Facebook, you can ask what social media platforms they use and why,” Geering suggested.

What’s your favorite video/photo/meme right now?
Ask your child to show you one or a few recent videos, photos or memes that they saw on platforms like TikTok or Instagram and particularly liked.

“This gives you a peek into what’s popular in your kid’s world,” Sinclair-McBride said. “Parents can learn more about their kid’s interests and connect on a deeper level about what brings them joy. They can also, if applicable, begin a discussion about potential pitfalls with that piece of content ― is it misinformation? Discriminatory? Showing a dangerous idea as a prank?”

“These questions create conversation and provide kids with a healthy framework for thinking about what they are viewing,” she said. “I’d recommend the parent answer the questions as well, and show your kids the accounts you most like or dislike.” 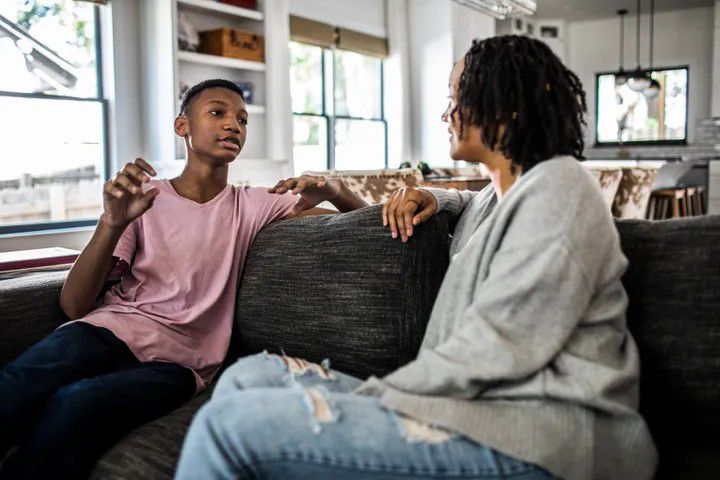 MOMO PRODUCTIONS VIA GETTY IMAGES
Talk to your child about the things they enjoy seeing on social media.

“This gives you insight into your child’s social world,” she explained. “Does their most contacted group on social media match up with their in-person friend group? Why or why not? Any new-to-you people mentioned? Can your child tell you more about them?”

Psychotherapist Noel McDermott similarly advised inquiring about the people they encounter on social media and how they feel about them.

“Find out what they like about the various spaces they inhabit, who else is there, which ones are real world friends, and which are not,” he advised. “Ask about their standing and status in the spaces and what they are trying to achieve and if anyone is upsetting them.”

Are your accounts private?
“Privacy is a big deal on the internet, but it’s hard for some kids to understand this as they were born into a digital world where everything feels accessible and even celebrities can feel ‘known,’” Sinclair-McBride said. “It’s best for accounts to be private so that your kid (with your help if age appropriate) can screen new followers and requests.”

“Our kids need to know how to engage with social media in a manner which is healthy and safe. They need to know what to do should they feel unsafe,” said Dr. Khadijah Booth Watkins, associate director of the Clay Center for Young Healthy Minds at Massachusetts General Hospital.

She advised asking, “Do you know what to do if someone is mistreating you or if you feel unsafe online?” Then, encourage them to come to you or another trusted adult if a bad situation arises.

How do you feel when you use social media?
One of the most valuable things parents can do when it comes to social media is to encourage their children to think about how engaging with it makes them feel.

“You can find out if they’re comparing themselves to others and have a conversation about how that works out online and off,” Geering said. “You can see if they’re feeling down or isolated when they’re using the platforms, and also if there are things that help them feel upbeat and good about themselves.”

Talk about their underlying reasons for being on social media and ask what they think the pros and cons are. Groner suggested looking up different articles and studies about social media usage together to figure out what makes sense for them. Try to help them understand the difference between reality and what we see online.

“We look at a post and then tell ourselves a story about what we see. Often, the story is mostly fantasy,” said Groner, who cited a story she heard while leading a workshop for 13-year-old girls.

“One girl had asked another to do something on a Sunday morning and was told she was having brunch alone with her family,” she recalled. “It just so happened that another friend was doing the same and when they both posted brunch pics on Instagram, this girl felt lied to and left out. Why? She told herself a story that these girls were together. In fact, they were not.”

Of course, you might find your child is using social media in a way that feels healthy and positive, but if they aren’t, ask them what their goals are, what they’d like to get out of it. Then, work together to figure out what they can do differently to achieve these goals.

“Help them think about what their values are and how they might take actions that are better aligned with their values ― like unfollowing accounts that leave them feeling badly and following accounts that leave them feeling good,” said Dr. Neha Chaudhary, a child and adolescent psychiatrist at Massachusetts General Hospital and Harvard Medical School and chief medical officer at the teen mental health company BeMe. 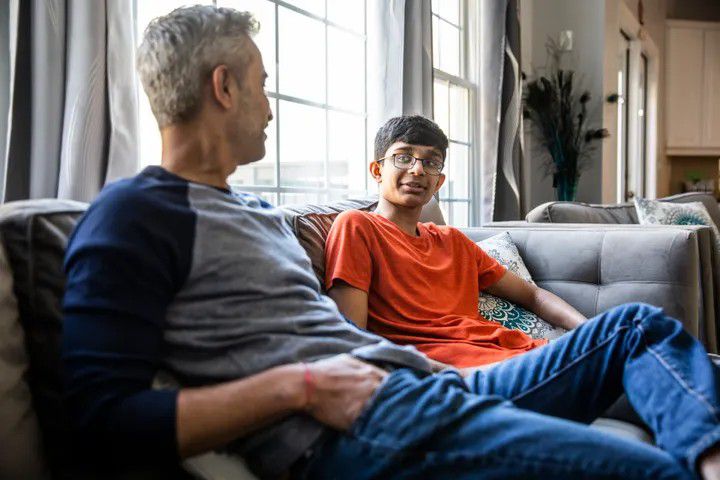 MOMO PRODUCTIONS VIA GETTY IMAGES
Encourage your child to think about how they feel when they use social media and afterwards.

“Conversations about social media should be ongoing,” Booth Watkins said. “As you are having conversations, help them to think about their purpose and the image they want to present. Help them think about who they’re posting for and potential reactions.”

Encourage them to think critically about what they share, even if it just means taking a moment before hitting “post.”

“As young people are not focused on the future, help them consider how they can insert a pause before posting to lessen the likelihood of posting something that they will regret or that would impact them negatively,” Booth Watkins said.

If they like to share photos of themselves, talk about which photos they like to post and which ones they don’t. Ask what they want others to think about them based on the pictures they choose.

“Asking your kids about whether or not they feel comfortable posting photos on their accounts without filters might open the door to a conversation about how comfortable they feel with themselves in general or whether they fear judgment from particular peers,” Chaudhary said. “By using social media as a conversation starter, you’re acknowledging that technology use might be important to your teen, while potentially learning more about what they experience in general, especially from a mental health perspective.”

Have you seen anything on social media that you’d like to talk to me about?
Make it clear you’re there for them if they ever want to talk about anything they see online. Open the floor for them to share any issues that have arisen ― or consider even sharing your concerns about what they might encounter.

Sinclair-McBride advised saying something like, “Have you seen anything on social media that you’d like to talk to me about? Some kids have seen for example [insert content you are concerned about] so I was wondering if you have ever seen it.”

Give them the opportunity to let you know about any worries and then offer your support and help. Again, show curiosity and care, not judgment.

“It’s important to try to stay as calm as possible if your child answers yes to this question, and thank them for their honesty,” Sinclair-McBride said. “You can’t help or correct a problem if you don’t know, so your kid telling the truth in a situation like this is always something to praise.”

Try not to get too bogged down in fears and hypotheticals around social media ― you risk letting that negativity infuse your conversations with your kids.

“While it’s true that social media is a relatively new sphere of worry for parents ― especially parents of tweens and teens ― I think it’s important to keep the bigger picture in mind,” Geering said. “There are all sorts of dangerous waters our kids have to navigate out in the world. Social media is one more item to add to an already pretty long list. When we create lasting, healthy relationships with our kids, teaching them the tools they need to cope with the bad days that come along with the good, the odds of seeing our little ones grow into happy, healthy adults are a lot higher.”