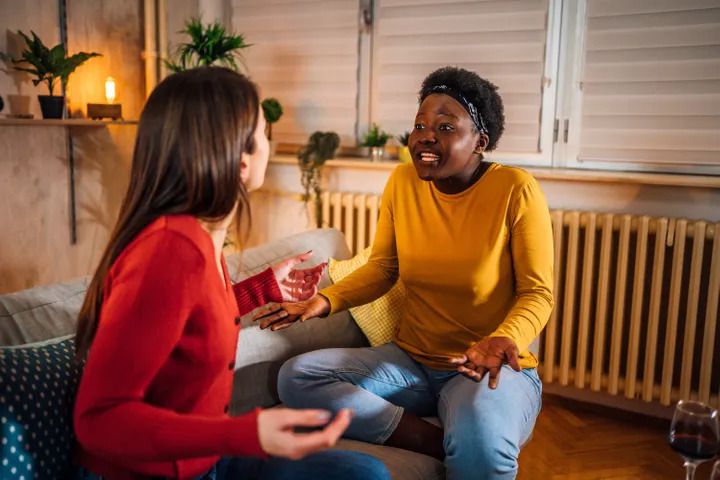 Even if you have a long history with someone, your friendship isn't necessarily built to last.

In the months leading up to the premiere of “And Just Like That...,” fans were wondering how the “Sex and the City” reboot would address the absence of Kim Cattrall as the crew’s fourth Musketeer, Samantha Jones. The writers tackled it early: She and Carrie had a falling out and were no longer friends.

It’s not uncommon. Despite exchanging friendship bracelets with childhood besties and promising to be best friends forever, as we move into adulthood, our relationship needs change. Sometimes friendships just run their course. Other times there are toxic dynamics at play that make a friendship breakup simply inevitable.

It’s consistently one-sided.
“Relationships can’t be equal all the time, but over time they should equal out,” said Irene S. Levine, a clinical psychologist and friendship expert. “There’s an inequality in the relationship if one person is doing all the heavy lifting, always being on the giving end.”

When only one person in the friendship is putting in effort to spend time together or taking an interest in the other person’s life, things start to become one-sided. You might feel unappreciated and less inclined to open up if your friend doesn’t seem genuinely interested in you.

“It’s a big red flag when someone who is supposed to be your friend turns most of your conversations into their own personal monologue,” said friendship expert and author Shasta Nelson. “Or when you find yourself unable to express your ideas or share your own experiences with them. Or when you start telling a story and they change the subject back to themselves. These are important indications that a friendship isn’t a real friendship.”

Being around this person makes you feel bad.
“If we hang up the phone or drive away from our time together feeling unpleasant emotions, we’ll be less likely to want to keep repeating that experience,” Nelson said.

Pay attention to whether or not your interactions leave you feeling drained, if that person judges or criticizes you, if they never affirm you or show gratitude or appreciation, or if the substance of your conversations is always negative.

“None of us wants to feel judged, criticized or devalued, and yet all too often we don’t take the time when we’re together to say, ‘What can I do to make sure my friend feels better for having been in my presence?’” she added. “Too often we received advice when empathy would have felt better, we listened to complaining all night instead of some sharing that left us happy, or we felt like she was judging our choices when we want to feel accepted.”

Levine pointed to the emotional ― and even physical ― indications that a friendship might not be particularly healthy.

“When you to get together, you feel anxious, jittery or uncomfortable,” she said. “It may even be somatic, showing up in headaches or tummy aches.”

You don’t have any plans to get together.
“One of the biggest causes of relationships not lasting is when people don’t initiate time together,” Nelson said. “There are a lot of people who like each other but their friendship never lasts simply because they didn’t figure out a way to initiate new time together after a big life change (i.e making time together when they now no longer work together) or when one person feels resentful for being the one who always reaches out.”

Of course, we all go through periods when our schedules are difficult to coordinate, but if you can’t even squeeze in 10 minutes for a phone call or text exchange every now and then, that might be an indication of your real priorities.

“Finding it hard to schedule time with each other or if one or both of you keep breaking appointments might suggest that your motivation to be together is vastly diminished,” Levine said.

They don’t celebrate your success.
“Another sign of a toxic friendship is a friend who’s just bringing you down,” said psychologist and friendship expert Marisa G. Franco.

Pay attention to their reaction when you find success in your life ― whether it’s work or a personal matter.

When a friend doesn’t celebrate your successes, it’s often out of a sense of jealousy or insecurity.

“Being happy for your success and more generally wanting you to succeed is an important part of healthy friendship,” Franco said. “The opposite of that is more toxic.”

Your communication is strained.
No friendship is absent of conflict or tension from time to time, but there should still be an ease of communication. If this is lacking, consider if there are toxic dynamics at play or you’re simply drifting apart.

“There may be frequent misunderstandings, or you simply run out of things to talk about,” Levine said. “It becomes tough to speak to one another.”

She noted that your life circumstances might have taken such divergent paths that you have less in common than you once did. It might also be difficult to overcome “having vastly different lifestyles based on deep-seated and discrepant beliefs over politics, religion or money.”

If you run into an issue with your friend, consider if they’ll have an honest, constructive conversation about it.

“Most of us try to talk with our friends about the things they do that irritate us ― always being late, texting or calling us at inconvenient times, bringing up sensitive topics in front of other people,” said Glenda Shaw, author of “Better You, Better Friends.” “These are the kinds of issues everyone has to negotiate in life. What becomes a red flag is when a person continually ignores your request to address a situation that irritates you.”

There’s an unresolved breach of trust.
“We all have different deal breakers, boundaries, breaking points,” Shaw said. “It’s helpful to figure out what your own personal ones are.”

She noted that a red flag for her is a person who gossips incessantly about everyone because it’s a sign that you might not be able to trust them.

“One of the hardest issues to deal with in friendship is when you find out that a friend is not being honest with you,” Shaw explained. “Unlike our family and colleagues, our friends are the people we choose in our lives. A real friend is a person we’re honest with, a person we trust.”

Even with a trustworthy friend, something may arise that jeopardizes your faith in them. It’s important to work through these situations if you want to preserve the relationship.

“One sign a friendship may be fraying is that there has been a major breach of trust that remains unresolved,” Levine said. “Some of these may be fatal ― undermining the person with her boss, saying hurtful things behind her back or having a romantic liaison with her lover.”

They don’t listen to your perspective.
“In a healthy friendship, you work through conflict openly instead of pushing it away and pretending it’s not there, or ghosting or withdrawing,” Franco said. “You’re able to say, ‘Hey, this hurts me,’ and the other person wants to listen because they are invested in continuing a relationship with you.”

She noted that in unhealthy friendships, people might withdraw when they’re upset. Or they might attack you, blame you for their problems or otherwise project their negative experience onto you. There’s a lack of interest in reaching mutual understanding.

It’s a major sign of a toxic relationship if a friend rarely considers your perspective, Franco added. “They’re thinking about whether you’re fulfilling their needs but not whether they’re fulfilling your needs. When I was writing my book, I interviewed someone who was supposed to go a friend’s dance recital but couldn’t because she got sick. Her friend got mad at her and said, ‘You abandoned me, and you’re a bad friend.’ Clearly that’s a lack of perspective-taking. She only thought about her own needs and not her friend’s.”

Listening to one another is a fundamental part of healthy friendships. As Nelson noted, “if a person doesn’t seem to want to hear you, then that’s a warning that this friendship is not working.”